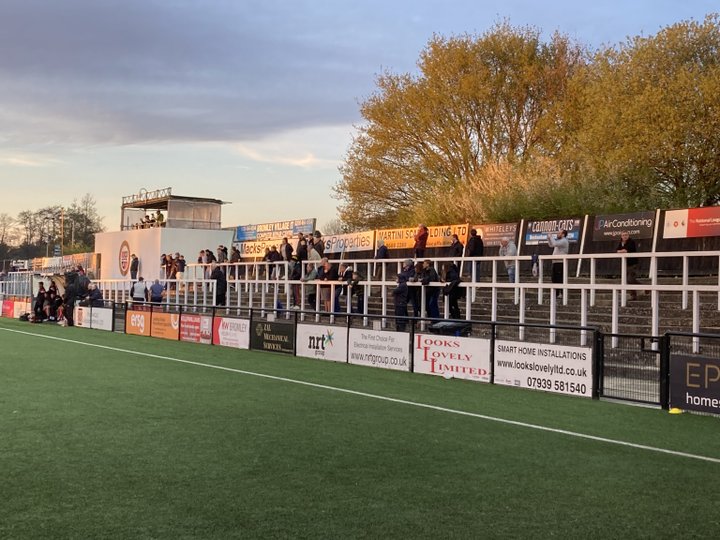 It remains any three from four at the bottom of the Pitching In Isthmian Premier- but Cray Wanderers have put themselves in pole position for survival. Our report from Hayes Lane.

End of season football often comes with added jeopardy, and with a collection of suitable idioms. Well we didn’t travel to Hayes Lane carrying a knife with which to cut the atmosphere, our breath was not baited, and our bum was most definitely not squeaky (thanks to Sir Alex Ferguson for that one), but there was tension on both sides this evening as Cray Wanderers welcomed East Thurrock United.

With two points between the two sides at start of play, two matches to go, and both sides in dire danger, the outcome was critical to Wands chances of escaping the relegation, and only slightly less important to the travelling Rocks. With the bottom two most definitely going down on Saturday, and the third bottom clubs across the four Step Three Divisions competing for points-per-game reprieves, Wands were in a perilous position. A win for their visitors tonight would leave Cray- here’s another idiom for you- clinging on by their fingernails, whilst a home win would move the jeopardy in the direction of the Rocks.

United have been doing an excellent impression of escape artists of late. Five matches unbeaten have seen them climb from rock bottom and nine points from safety less than a month ago to a position where victory tonight will would them safe. Wands, in contrast, have taken one point from their last fifteen- although that single point did come in their last match, against promotion chasing Enfield Town, and it was two minutes from being three points which would have given this match a rather different complexion. When the two last met, on New Years Day, Wands won three-one to move a place above their rivals- but even then the two were firmly in a relegation fight, and so it has remained. 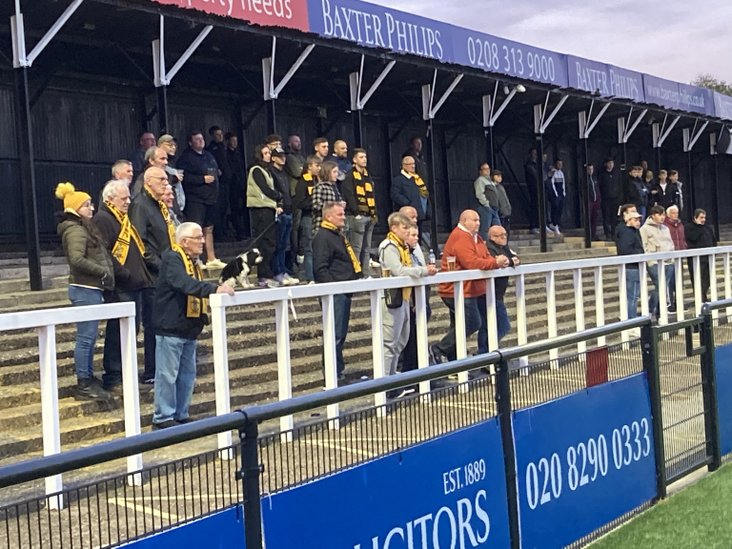 Walking around Hayes Lane forty five minutes before the game, trying not to get soaked by the sprinkler watering the (plastic) pitch, two things were apparent. The first was that the fans of neither side were particularly confident, even the visitors despite their impressive run. The second was that the only part of Hayes Lane that bore a Cray Wanderers branding was the corner flags. This is undoubtedly a lovely stadium, but even after many years, it isn’t home. Hopefully the new Flamingo Park ground will be finished soon, but which Division the Wands will be in remains to be seen. If they fail in their fight to stay up there is even a possibility they’ll end up South Central after the FA has done their maths, and it’s a long way from Bromley to Basingstoke.

By the way, the most miserable set of fans watching on turned out, on closer inspection, to be Bromley supporters. Perspective, eh?

The visitors kicked off and were soon into their stride, Oli Coker firing in the first shot of the match after five minutes. It was long distance and well over the bar, but it awoke the sizeable away contingent, who gave us a quick chorus of “We are the Rocks,” eliciting disapproving glances from Bognor Regis Town fans everywhere. Mind you, if there were any present they were strangely quiet- we heard nobody claiming that Worthing would come “straight back down.”

The hosts had a better chance on eleven minutes, a rare foray giving Sam Wood the chance to send a tame effort wide, but it was United, in grey with fluorescent green piping, posing most of the threat, and the first corner saw Ollie Miles glance a header just over the bar, which prompted the fans behind the goal to serenade keeper Arthur Janata, who at this point hadn’t touched the ball. He was called into action a few minutes later, however, throwing himself on the ball as Chris Dickson charged towards it. 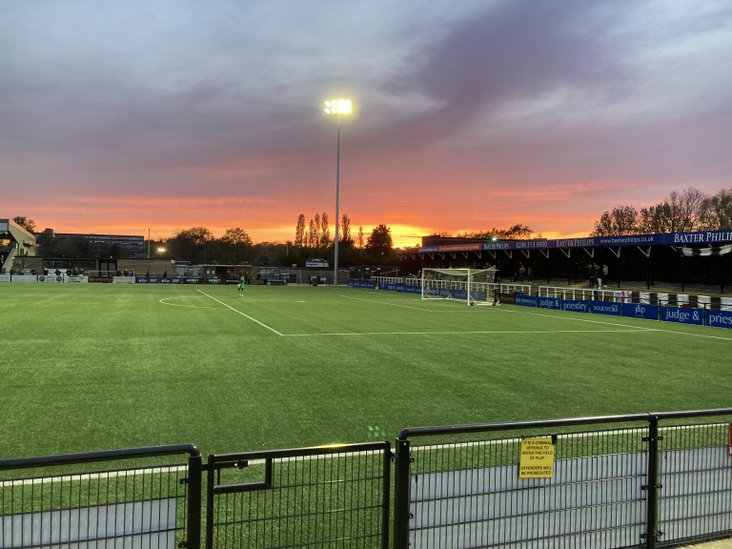 We reached the midway point of the half with the Rocks well on top, when of course the first goal arrived- at the other end, creating much joy amongst the home faithful. Chris Dickson has been deadly in front of goal for his entire career, and he shrugged off a challenge as if it wasn’t there and fired across Janata into the corner. Two minutes later he was again first to a cross but couldn’t quite control it, and the visitors looked rattled, their fans suddenly silent.

They were as quiet as the grave on 29 minutes. A clearance found Soul Kader, and his finish was as smooth as his name. Barry White smooth, in fact, not that the Wands number 16 resembled a walrus, of love or otherwise. Two nil, and suddenly it seemed a long way back for the visitors, who responded with a very early change, Adarkwa on for Miles. The complexion of the game had changed entirely, and suddenly the only side who looked dangerous were the hosts, with Dickson everywhere and Jamie Yila constantly a danger down the left, ably supported by Kasim Aidoo. The half ended with the visitors desperately in need of a regroup.

The second half started as the first ended, although an attacking spell for the visitors at least saw them earn two corners and give their supporters something to get slightly excited about, as they’d descended into a kind of morose stupor beforehand. United began to dominate the ball without looking particularly dangerous, and a trio of home fans leaving the bar worried aloud that their defence would “go to sleep again, late on.” That has certainly been Wands problem this season; they’ve scored more than anyone else in the bottom ten, but at the other end…well you can’t build success on attack alone, even if you’re Marcelo Bielsa.

The hosts slowed the game down, and then on the hour, killed it. A shot off the post rebounded to Dickson, the striker again in the right place at the right time. Three-nil, and only calamity would see them fail to take three points now.

Rocks pressed. Teenage keeper Nathan Boama, promoted from the youth side and confident beyond his years, was finally involved and stood firm. Johnny Ashman perhaps should have tested him, but although he got the power couldn’t find the accuracy, and stood for a moment, dejected, pulling up the legs of his shorts before trotting off, head down.

At the other end, man of the match Dickson held up the ball and sprayed it around, and Wands looked dangerous when they could be bothered, but the next chance came to the visitors, Adarkwa heading wide. And then a goal- and a fine strike from Coker, always most likely to be the Rocks saviour-gave us a game once more, scorching into the net from distance. We had eighteen minutes and they needed two more.

We entered the last ten minutes, the intervening period since the goal generally dominated by the hosts, and Coker was removed from the fray, replaced by Ruben Dantas-Carvalho. Could he make a difference? He was immediately involved in a move which saw Ben Wyss fire over, and there was more urgency about his side, but Cray stood firm and defended deep, Dickson plowing a lone furrow. And then…it was four, a lovely back heel sending Sam Wood clear to fire home. The majority of the visiting fans took this as their cue to head to the bar, and it was understandable, as Wands poured forward.

The visitor didn’t give up. Wyss brought a fine one handed save from Boama as the clock ticked around to ninety two, but the next goal remained more likely to arrive at the other end. There wasn’t one, but we had more than enough.

It’s been a difficult campaign for both sides. As Phil Babbs so eloquently put it in tonight’s programme:

‘As the delicate mayfly of time collides with the speeding windscreen of fate, and the angry wasp of destiny flies up the trouser leg of despair I see we are out of time. So until next season, it’s goodbye now.’

We wait until Saturday to see who gets squashed. Or stung. At the moment, the insects concerned are still very much alive.