Rocks unveil their 'Wall of Thanks' and confirm two returning players 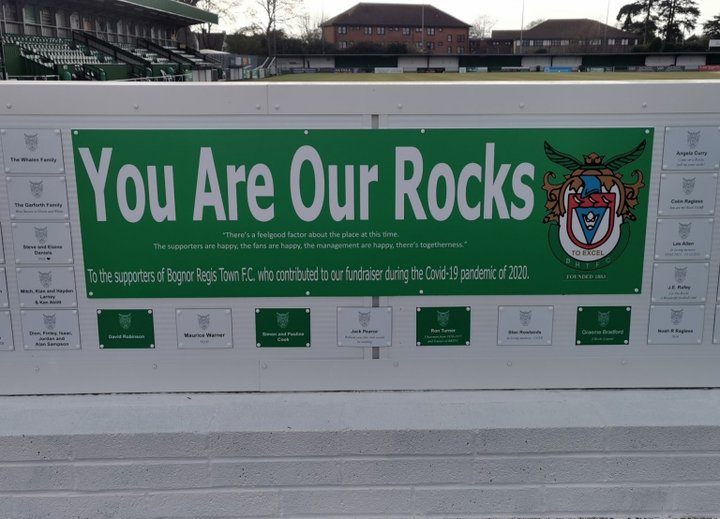 Bognor honour those who donated- and confirm Lethbridge and Crane

Bognor Regis Town's crowdfunding scheme last year was an unparalleled success, raising more than fifty thousand pounds- and yesterday the club unveiled their 'Wall of Thanks' honouring many of those who donated. You can still get your name on it- find out more HERE.

The Bognor Regis Observer also had some good news for Rocks fans, as it confirmed that Brad Lethbridge and James Crane were staying on for the 2021-22 season.

Lethbridge signed permanently for the club last summer after leaving Portsmouth, but had spent much of the previous two seasons on loan at Nyewood Lane. In the campaign which ended prematurely in March 2020 he made twenty eight appearances, scoring seven goals- despite suffering a collection of injuries. That followed twelve goals in thirty nine appearances during 2018-19- and in our last aborted season he managed five goals in his thirteen games.

Crane spent more than a decade with the Rocks, and then spent some time with Worthing which we're not allowed to talk about, returning in May 2019. He made thirty nine appearances in 2019-20 before it came to an end, and managed nine goals- fabulous for a player who is generally a full back and which included a hat trick in a match at Margate which the Hartsdown Park faithful won't thank us for mentioning. His 2020-21 season was even more curtailed than it was for the rest of us, as he picked up a bad knee injury and missed it all.

My First XI- Peter Hay, Hornchurch  We have a late entry for our ‘My First XI’ feature. Peter Hay writes us a Hornchurch essay, and gives us a First XVIII!