Saints not quite divine, as Boro come from behind to triumph 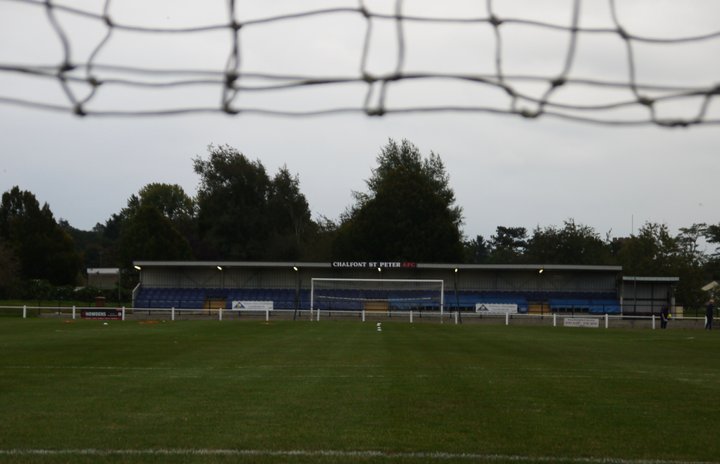 Chalfont's cup endeavours come up just short, but what a match we had at Mill Meadow

Football fans of a certain age will have grown up with the excitement of midweek FA Cup nights. The tension of knowing that the outcome will be decided in front of your eyes come what may, the hope that your team will finish off the opposition without the need for extra time, the lottery of a penalty shootout- midweek cup nights have always been rather special.

What midweek cup nights have also always been are replays, but not this year. The world has changed, the FA Cup First Qualifying Round is a midweek event, and there would be one tie, no extra time, no replay, straight to penalties if required, and it all seemed rather strange. Still, strange is better than the almost six months we had with no competitive football, so if we have to have strange to have football, then so be it.

Arriving at Mill Meadow, home of Pitching In Isthmian South Central side Chalfont St Peter, we were hoping for something else that could perhaps be classed as strange. A Saints victory. That’s not a comment on the ability of their young side, but our hosts tonight hadn’t been good at getting past this stage of the competition in their recent history; indeed they’d departed at First Qualifying stage in three of the past four seasons, the odd season out, 2017-18, seeing them depart even earlier, in the Preliminary Round. That said, there was an early season confidence about the place. They’d had only two competitive matches, with one win, one defeat, one goal scored and one conceded. Nothing was impossible. It was, perhaps, “Anything Can Happen Tuesday.” 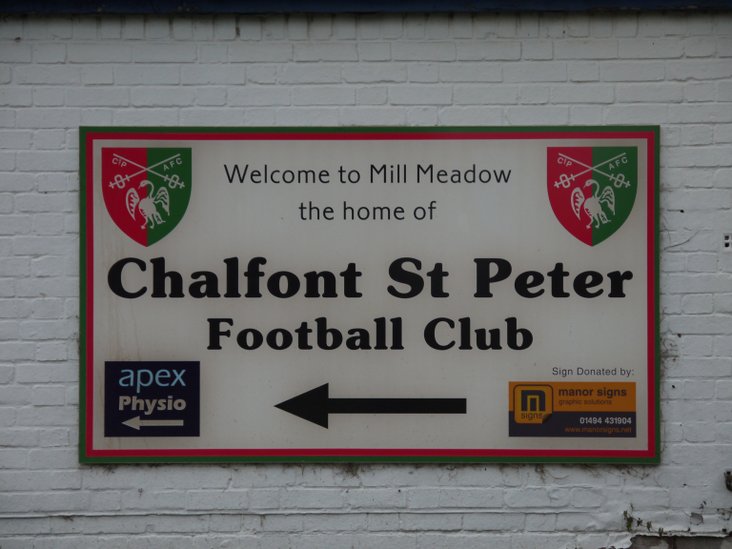 In charge of ensuring that nothing surprising could happen were Southern Premier South side Farnborough. Visiting fans were also hoping to experience a relatively infrequent phenomena, too, as their side had been similarly terrible in the cup in recent years. Last year they were walloped at the Second Qualifying stage by Wealdstone, but it was ten years since they’d last gone beyond that round- and the fact that they’d entered the competition in the Second Qualifying Round on four of those occasions should tell you most of that story. They started their journey on this season’s Road to Wembley with a goalless draw against Wessex Premier side Lymington Town, triumphing in the shootout, and followed that with a three-one home defeat to Swindon Supermarine in the League on Saturday. Perhaps this was a good time for the Saints to take them on? We were about to find out.

The hosts, in their traditional green and red quartered shirts, got us underway- after the teams changed ends, necessitating a large number of away fans having to do the same. The home side were quickly on top, and quickly ahead- Panny Boxer controlling the ball expertly at the edge of the box and firing home on the volley.

Prior to the game, listening in to the visitors teamtalk, the hosts were described as a “long ball team.” The goal came from a crisp passing move down the right, and whilst there were moments when both sides used a long punt to good effect early on, the description seemed unfair- particularly during Farnborough’s first real attack, which saw some tenacious defending from the Saints and a willingness to try and pass their way out of trouble, a tactic which didn’t quite work but gave Boxer the chance to put in an excellent tackle to clear the danger just outside of his own box.

Another passing move brought goal number two in the eleventh minute. A long throw into the home box was cleared, and the break down the left was swift, the ball being worked quickly forward before finding Sydney Ibie on the edge of the Boro box. He still had quite a bit to do, but did it with panache, finding the net before charging of to celebrate. It was worth celebrating- did we have a giantkilling in prospect? “Wake up Boro,” came a shout from the away end, followed by a rendition of “we’re going to win three-two.” 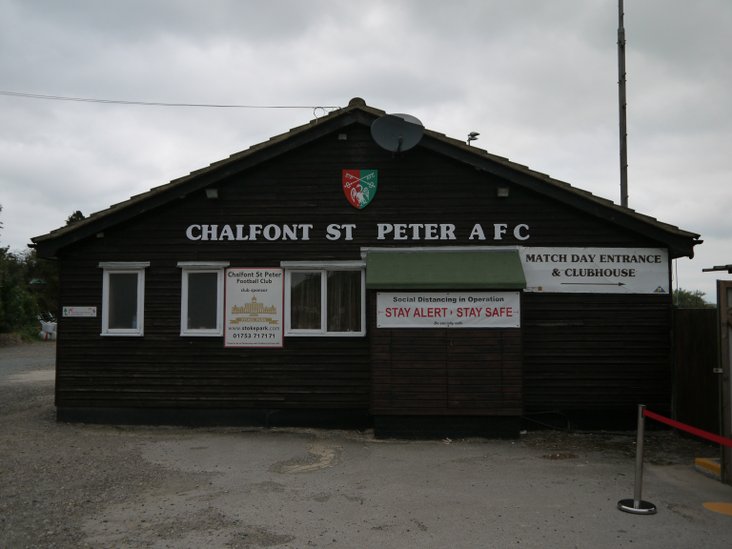 Boro did wake up, and began to look threatening. Andrew Sealey-Harris, down the right, had looked lively from the start, but when he managed to get the ball into the Saints box the defence stood firm. “He’s here, he’s there, he’s got George Michael’s hair,” sang the away fans to forward David Fitzpatrick. But could he sing Careless Whisper? Sadly we were never to find out.

Midway through the half Connor Cullen was fouled right on the edge of the box. Sealey- Harris lined up the ball, whilst his supporters shouted for a booking for Luke Elliott. They didn’t get one, and the free kick cleared the three man wall, and the bar. Two minutes later the same player had another chance, from almost exactly the same place, after Brandon Kalu brought him down. This time he went low, and the deflection off the wall flew across and found the head of Cullen at the far post. Two-one, game on.

Moving into the last fifteen minutes of the half the visitors were clearly on top. But although Fitzpatrick brought a save from Andy McCorkell, and there were a few neat passing triangles and a few wild clearances, the equaliser wouldn’t come- but another foul, which saw Boxer booked, gave Sealey-Harris another chance to fire goalward. He missed the wall, but also the target, by some distance, and the visiting fans, deprived of something to cheer, went back to whispering sweet nothings to the home keeper. A fellow in a white baseball cap seemed particularly taken with McCorkell; perhaps we were witnessing the start of a bromance?

The ball moved from end to end, but neither keeper was troubled, and the half petered to a close. 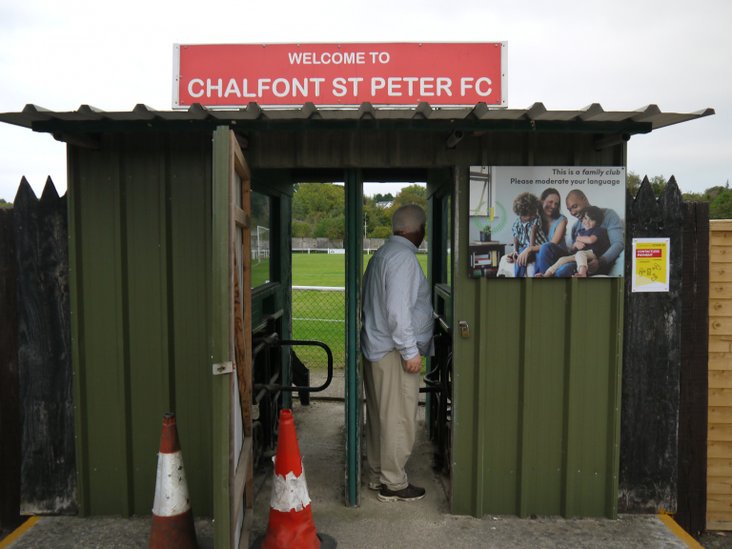 Farnborough made two changes at the interval, but one thing didn’t change- they quickly had another free kick almost in exactly the same place- albeit at the other end- as the last three. But once again it hit the wall and the chance came to naught.

The next opportunity came at the other end, a great run from Owen James coming to an end when a desperate- but timely- clearance conceded a corner, which was wasted. And then a hoof from the Farnborough keeper, and we were back in the other box once more, again to no avail.

The pattern of the game became set. The visitors poured forward, the hosts defended in depth, walloped the ball away when they had to, and looked to break quickly when the opportunity came. The opportunity did come twelve minutes after the break, and more excellent weaving from James earned his side another corner, which was quickly followed by a free kick just outside the box. It found the head of Ibie, six yards out, but if anything the forward was too tall and couldn’t manage to direct the ball downwards, so it cleared the bar.

More away pressure as we passed the hour mark brought another free kick, followed by a corner, followed by another free kick, followed by another corner, but no goal. The visiting supporters began to get rather annoyed at the referee, although that had, in truth, been a constant for the entire game. Sealey-Harris- the most dangerous player on the pitch throughout, although James for the hosts deserves an honourable mention- tried his best to draw his side level, but his shot struck the upright before going out for a goal kick. Cullen followed up a moment later by firing just wide of the same post. And then we were into the last twenty minutes, and Saints were still ahead by the narrowest of margins. 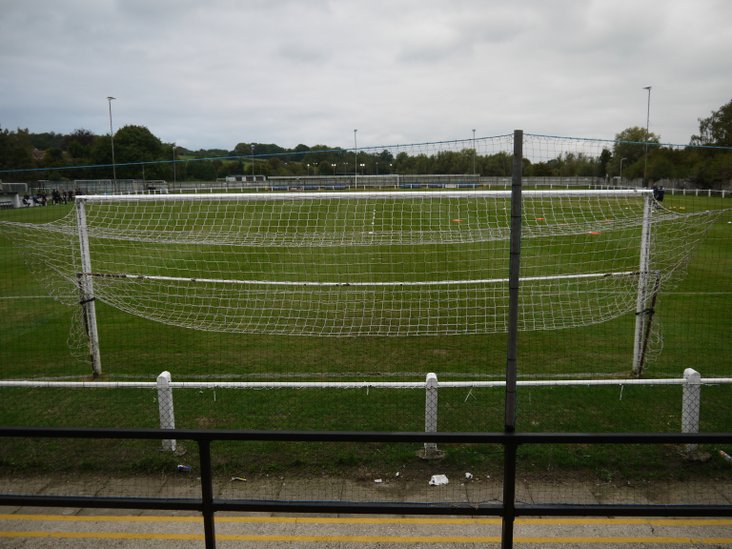 With fourteen minutes to go, pandemonium in the Chalfont box. The fans behind the goal shouted for a spot kick, and the referee seemed to take a while to think about it, but then pointed to the spot, almost in slow motion. Substitute Louie Paget took responsibility, and whilst McCorkell went the right way, his arm needed to be an inch longer for him to be able to keep it out. Two-two, and two sides looking to ensure we didn’t have another ten penalties to come.

The pace of the game was frantic, with the visitors still in the ascendency and the hosts remaining dangerous on the break. But the next clear chance came to Adam Roberts, the Saints number nine forcing Liam Beach to save at the second attempt.

Into the last minute, and another run from Sealey-Harris brought yet another foul. This time the shot was on target, and McCorkell couldn’t hold on. The ball was forced over the line by Tom Leggett, and the away fans had been right. They were going to win three-two- unless the hosts could find a dramatic equaliser. Sealey-Harris tried to make sure that wouldn’t matter, a superb run down the left ending with him walloping the ball against the bar.

The last moments of added time, and it was Farnborough’s turn to defend, but as a forward ball bounced through to Beach they knew they’d done enough. And as it bounced through to him a second time thirty seconds later they certainly had, and the celebrations started for the visitors. Farnborough had done what looked to be improbable after eleven minutes. 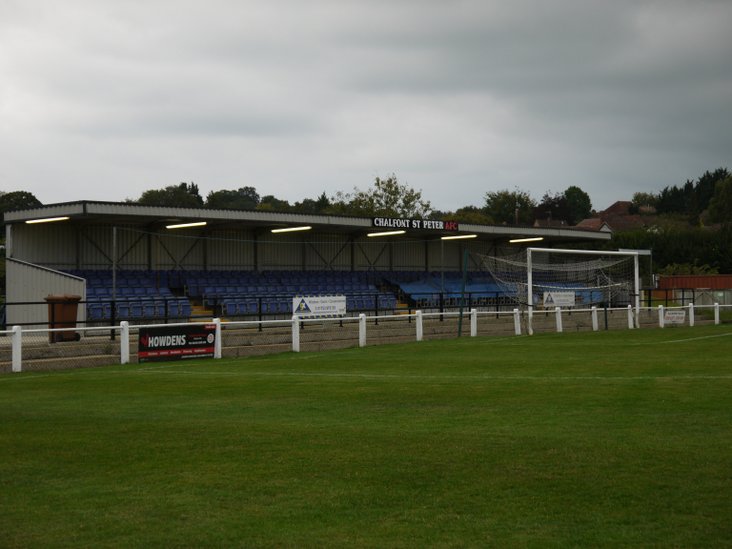 You might be forgiven for thinking that football is all about money these days. The TV sports channels of late have been full of discussion about Gareth Bale’s wages, Frank Lampard’s Chelsea expenditure over the summer, and whether Manchester City need to bring in reinforcements if their squad of multi-millionaires is to challenge for the Premier League title, and the sums involved have so many noughts that they are almost impossible to comprehend.

That said, if you’re amongst those who feel that football has been infected by a financial disease, there is an antidote. Take a trip to Chalfont St Peter and you’ll remember why the beautiful game got its name.

At first glance, Mill Meadow might not strike you as beautiful. Indeed, it’s showing its age a little, unsurprisingly- resembling something from a bygone era. But it is obviously loved by the people who frequent it, and their enthusiasm for the place is anything but hidden. Ask them what attracts them here, from chairman to secretary to playing staff, and their answer won’t mention glory, or financial reward. The only reward on offer here is the chance to be part of a community, to make a difference in that community, and to ensure that the club has longevity. The clubhouse was full of children’s toys, as it doubles as a nursery, and Chairman Denis explained, with obvious pride, that it brought the community to the club, and that many of the children who use it then go on to play in the youth teams here. He went on to talk about the need to shepherd resources, using them to benefit everyone rather than chasing on-field success, and he did so with palpable zeal.

Perhaps the real value of football is in the positive difference it makes to the world- a difference that should be measured in the heart and in the mind, not by the bank balance. If that is correct, then despite not being wealthy, Chalfont St Peter are rich indeed. 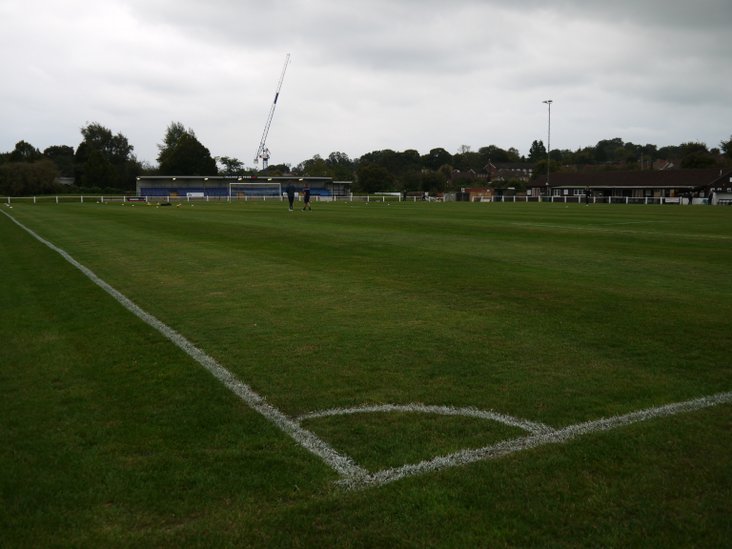  Giants. Slain. We had a big night of FA Cup action last night, and a number of notable results. Here’s our round up of the action.

Midweek cup special!  We’ve a big night of cup football in prospect- and here’s our preview of the action