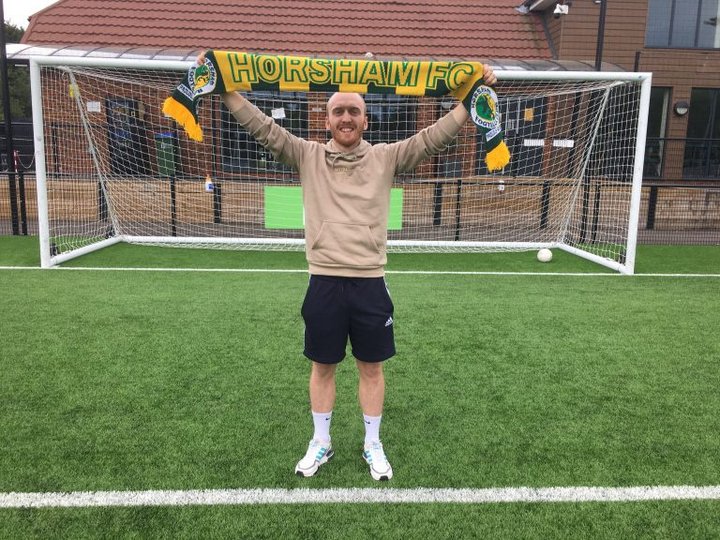 Former Heath and Hillians forward signs on at Horsham

Horsham have announced the signing of Alex Laing, last seen plying his trade at the More Than Tyres Stadium, home of Burgess Hill Town- where he made eleven appearances and scored two goals. He was about to join the Hornets when the season crashed to an end at the end of last year.

Alex spent some time at Three Bridges during the 2019-20 campaign, making eleven appearances and scoring three goals, but had a far more successful 2018-19 as part of the Haywards Heath Town side which reached the South East Division Playoff Semi-Finals. He made thirty two appearances as Heath made their Isthmian debut, scoring six goals- and also spent time at Hanbury Park during their promotion-winning seasons of 2016-17 and 2017-18.

Hornets boss Dom di Paola explained: “He can play in a number of different positions, he’s got good energy, and he’s quite a direct footballer. We’ve always liked him.

He’s a player with good hunger and desire, and in the right group he can offer something. Got lots of talent, he just needs to settle somewhere so hopefully he delivers with us.

We think he’s got the ability to do it and he’s at a good age now where he’s mature enough to give this league a go. We’ve lost quite a lot of forward players – Arron Hopkinson, Reece Hall – and we’ve got to bring in some competition in the final third."

 Ambers, Wolves and Rovers to compete in Cheshunt Community Cup June 26th is the date for your diary