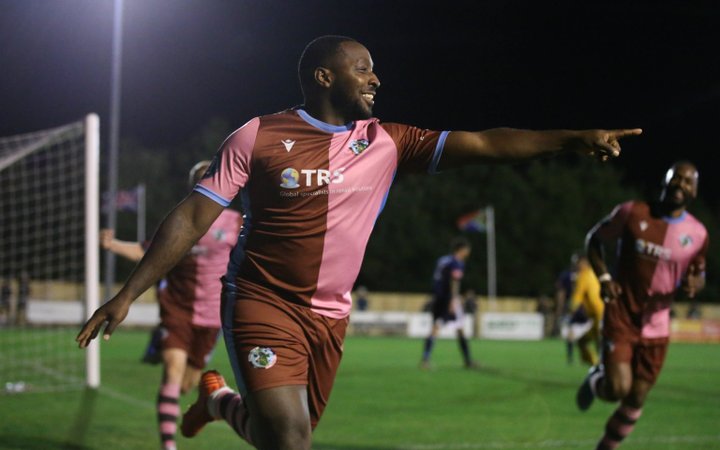 Only two points separate the top seven in the Pitching In Isthmian Premier Division after last night’s results, on a night which was full of shocks and surprises.

We start our round up at Potters Bar Town, who were hosting Cray Wanderers- the Wands arriving with an unbeaten record stretching back into 2019. That record has now vanished after the Scholars walloped their visitors by three goals to nil. All of the goals came in the first half, Ben Ward Cochrane with the opener and the third, Thomas Gogo’s effort sandwiched in between the two. Wands end the night in third, Bar are up to tenth.

Bowers and Pitsea remain at the summit, but they didn’t have it all their own way as they hosted Lewes at the Len Salmon. The Rooks took the lead from the spot just before the half hour, Aaron Cosgrave getting his fourth of the campaign, and then held out until fifteen minutes from time when Billy Knott struck home another spot kick to level matters. That’s his sixth of the season, and it earned the hosts a point.

Worthing, in second place, lost a seven goal thriller by the odd goal at Leatherhead, who seem to have truly put their seven goal hammering at Bowers behind them after taking seven points from the subsequent nine. Dan Rowe put them ahead after just four minutes at Fetcham Grove, but on the quarter hour Ollie Pearce equalised for the Mackerel Men, and that was all the goal action from the first half. The Tanners went ahead again in the sixty third minute, Joe Leslie with the goal, only for Mo Diallo and Pearce again to turn the match on its head in favour of the visitors. But the Tanners weren’t downhearted, and after Stefan Brown got an equaliser with twelve minutes remaining the home fans were delighted as Crossley Lema got what proved to be the winner in the eighty fifth minute. Leatherhead are seventh. 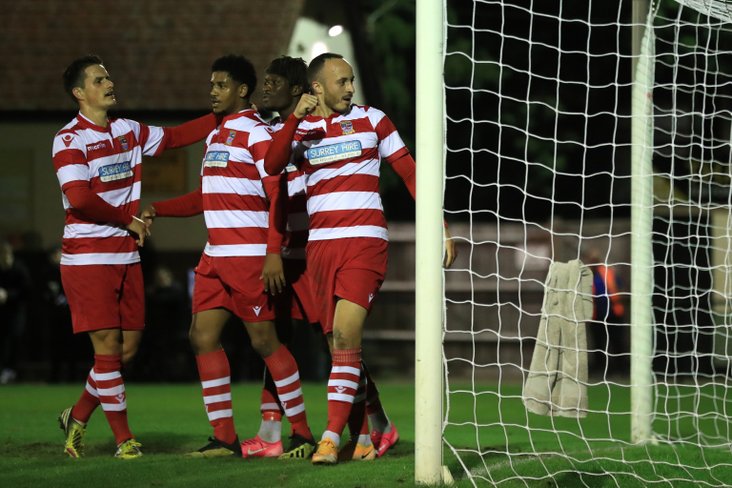 Cheshunt have had a fine start to the season, and made it three wins from four in defeating Margate at Hartsdown Park. Both goals came in the thirteen minutes following the break, and they both came to the Ambers, Mo Camara and David Knight getting them and sending their side fifth, just behind Haringey Borough who won on Monday.

Bishop’s Stortford, in sixth, took an early lead against Folkestone Invicta- who gave a debut to Sammy Moore. Aaron Greene got the opener, but Invicta levelled for a point fourteen minutes from the end, Jordan Wright firing home.

Bognor Regis Town joined Carshalton Athletic on seven points by defeating the Robins two-one at the Nye Camp. Joe Cook and Sam Dowdridge made the Rocks comfortable at the break, and Harry Ottoway’s goal six minutes from time proved only a consolation.

Wingate and Finchley delivered a shock at Hornchurch. They seemed down and out after Ellis Brown and Chris Dickson gave them a two goal lead after twenty seven minutes, but Mauro Vihlete and Charlie Edwards had them level by the break and ten minutes after it Billy Healey got what turned out to be the winner. The Blues are eleventh, the Urchins eighteenth.

Just behind Wingate and Finchley are Corinthian-Casuals, who defeated Brightlingsea Regent two-nil at King George’s Field, Nathaniel Pinney and Kieron Cadogen with the goals in the last fourteen minutes. Headline image from this match by Andy Nunn, and you can see the rest of his shots here.

Horsham were our big scorers, coming from behind to defeat Enfield Town five-two. Chris Smith gave the Hornets an early lead, but two in a minute just before the break turned the game in favour of the Towners, Sam Youngs and Billy Bricknell breaching the home rearguard. Harvey Sparks got an equaliser nine minutes after the restart, and then spectators witnessed the Charlie Harris show, with Harris striking in the sixty nineth, eighty sixth and ninetieth minutes to seal a hat trick and give his side all three points.

Horsham are sixteenth, Enfield fourteenth and in between them sit Kingstonian, who defeated Merstham two-one at the Whisky Bible Stadium. Harry Osborne and Elliott Buchanan put the K’s two up at the break, and even the talents of Calvin Ekpiteta, who got one back in the second half, couldn’t rescue anything but pride for the Moatsiders.

K's image courtesy of Simon Roe, and you can see the rest here.

 Bees and Swifts go goal mad! Three of our North Division matches last night had two goals between them. The other two had eleven!