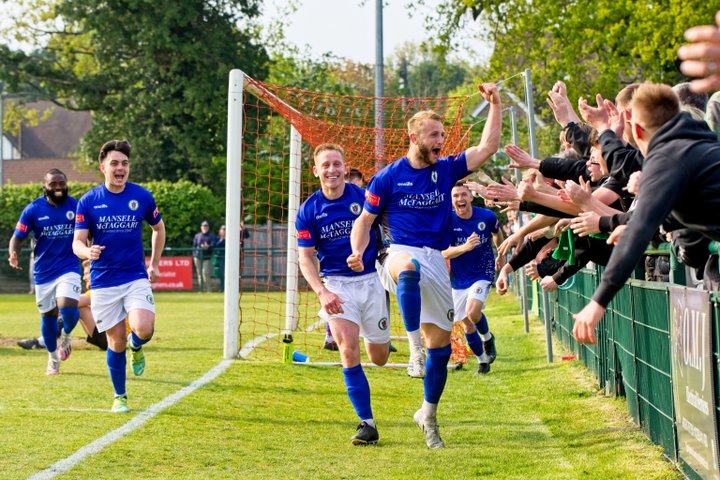 We’ve had a magnificent Pitching In Isthmian season, one which has been illustrated and enriched by the work of a number of brilliant photographers, who have recorded it for posterity. Chris Neal brings us his very favourite image of the season.

It’s the favourite of my shots from this season because it sums up the joy of non-league football. I don’t always shoot pitchside but was perfectly placed on this occasion. The Hillians’ Max Miller (arm raised) had just scored a last minute winner. Beside him Pat Harding was playing his last game for Burgess Hill after 11 seasons and 464 games (131 goals) and this was a near perfect send off for him. Though nothing major was at stake, it ensured a 7th place finish, just 4 points short of the playoff positions and hopefully points towards an exciting 2022/23 season.

I’m in my 60’s and retired now. I went to my first ‘live’ football game in 1968. During the 1980’s I began supporting my then local Isthmian League team Wycombe Wanderers but though I still follow them from afar, when my eldest daughter was born disabled I stopped going to football matches totally. My main hobby has always been photography and, 5 years ago with my daughters both now adults, I decided to take my camera to a local match. I settled on Burgess Hill Town v Dulwich Hamlet. The club spotted and liked my photos and asked if I fancied attending and taking photos more regularly which I’ve been doing ever since. I’ve now snapped 150 Hillians games and love being part of the club, which has a growing fan base and some great characters both on and off the pitch. I’ve made many friends there.

 My First XI: Lio Roberts We have a South Central First XI, courtesy of a neutral!

Shot of the Season 21-22: Amy Eve  We asked our fabulous Pitching In Isthmian Photographers to choose their favourite photograph of the campaign, and tell us why it is important to them.