Shot of the Season 21-22: Martin Addison 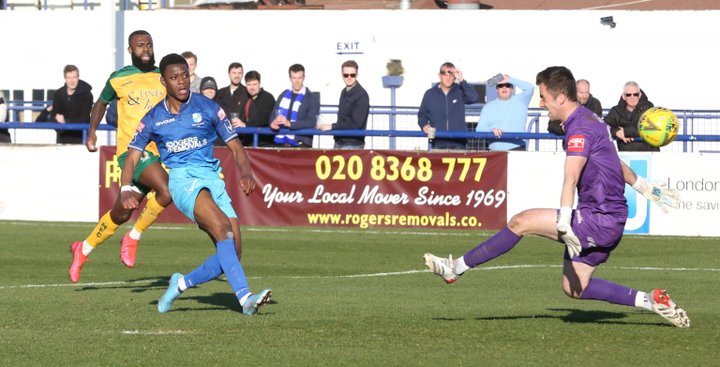 We’ve had a magnificent Pitching In Isthmian season, one which has been illustrated and enriched by the work of a number of brilliant photographers, who have recorded it for posterity. Martin Addison brings us his very favourite image of the season.

Taken on 19th March 2022 during Wingate & Finchley’s Home game against Horsham – This is Isaac scoring the second goal of the 3-0 win.

This shot is important to me because it represents the turning point in our season. At the time Wingate & Finchley were in a relegation battle with 4 other teams and trying to avoid finishing in that 3rd relegation spot – very important as Leatherhead can testify. With that win against Horsham and other results around us going in our favour, we saw a glimmer of light at the end of the season’s long dark tunnel. It moved us 5 points clear of the team in 20th place. Over the remaining games of the season Wingate & Finchley levered open that gap and finally finished in a safe 15th position.

I first started going to Wingate & Finchley in the 2006/7 season (My Son wanted to see a real football match and I wound up staying). I took some photos later that season for myself and noting that there weren’t any photos in the program, started offering them to the club’s media officer. He was pleased to accept them. That led to me taking photos at most home matches and in the 2009/10 season I became Wingate & Finchley’s Matchday Photographer – a job I have been doing ever since.
• What are your hopes for the forthcoming season?

Last season was the first under our new management team of Marc Weatherstone and Ahmet Rifat – Two long serving players with Wingate & Finchley and both firm fan favourites. It was their first foray into management and it was always going to be a bit of a rocky road. However, with a season under their belts, I hope for a more relaxing 2022/23. Fighting to be in the play-offs would be great, but a comfortable mid-table throughout the season would be fine by me!

Shot of the Season 21-22: Martin Denyer  We asked our fabulous Pitching In Isthmian Photographers to choose their favourite photograph of the campaign, and tell us why it is important to them.