Six for Invicta- whilst the Ambers, Blues and Rooks climb 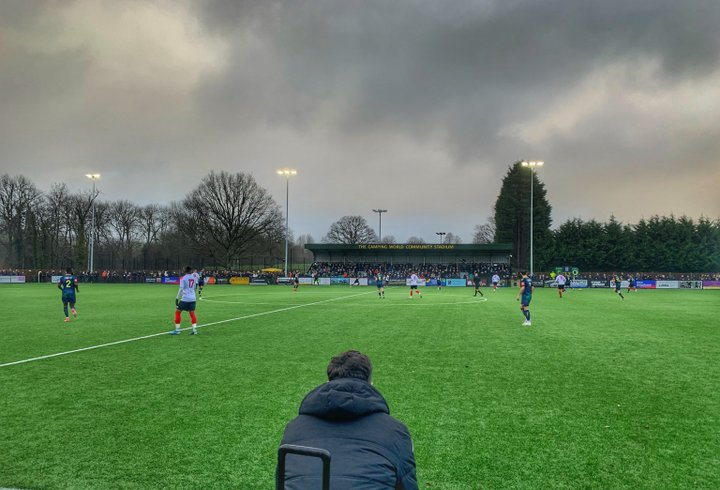 Regent, Margate and Borough also picked up three Pitching In Isthmian Premier points on a day without a draw. It's our round up.

After the match between leaders Worthing and Bognor Regis Town was rained off- moved until tomorrow- Folkestone Invicta had the chance to cut the gap at the top to four points with victory over Merstham- and by half time it was quite certain that they would do so as Matt Newman, Josh Vincent and Scott Heard made it one, two, three-nil. David Smith got goal four just before the hour and Adam Yusuff goal five just after it- his sixteenth of the season- and to make the day even worse for the Moatsiders, Michael Olarewaju saw red.

An own goal saw the visitors get one back, but Invicta remained merciless, and Lenny Atherton made it six just before the end.

Our match of the day- on paper, at least- saw fourth place Cheshunt host third place Enfield Town. Percy Kiangebeni put the visitors ahead on twelve minutes, but the Ambers were level five minutes later through Mo Camara. The two then couldn’t be separated until sixteen minutes from time, when Rowan Liburd got his ninth goal in only seven matches- and it proved to be the winner, the Ambers up to third whilst the Towners slip out of the top five. 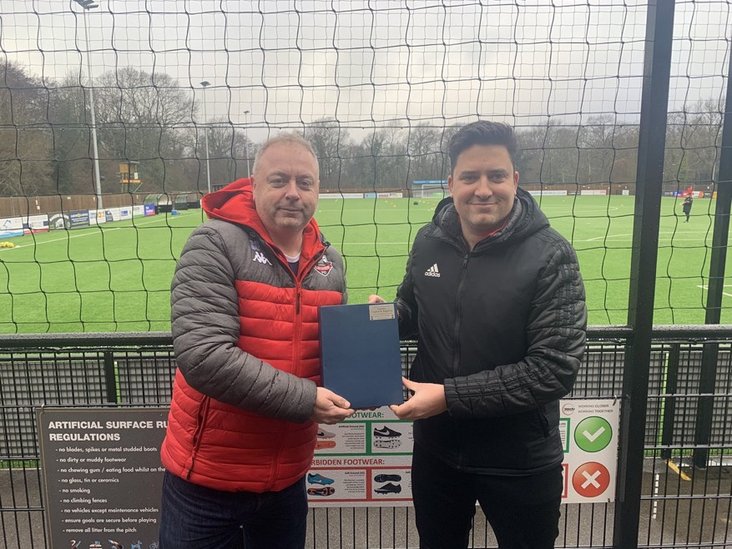 Stu and Dom- apparently Dick has Christmas off...

Bishop's Stortford, who started the day in fifth, travelled to take on Bowers and Pitsea at the Len Salmon. The Blues were twelve matches unbeaten, and were ahead in this one ten minutes before the break, Chris Harris breaking the deadlock with his second of the season. Frankie Merrifield made it two-nil eight minutes after the break, Jonathan Giles made it three nine minutes before the end, and although Max Cornhill got one back right at the end it made little difference to the outcome, as Stortford climb to fourth.

Horsham manager Dom Di Paola was belatedly presented with November’s Vita Risk Solutions Manager of the Month Award by Lewes Chair Stuart Fuller before today’s match between the two sides. The Rooks weren’t quite so giving in the first half, a Joe Taylor double either side of a Shamir Fenelon equaliser giving them a half time lead. Most of the one thousand, two hundred and eighty four braving the rather soggy conditions must have hoped for a Hornets equaliser, but they left disappointed as Deshane Dalling made sure of three points for the visitors with their third goal just before the end. Lewes break back into the top five.

Stuart took our headline image, as well as being in the other one!

Brightlingsea Regent, with two new additions to their squad over the holiday period, welcomed East Thurrock United, who took the lead on the stroke of half time, Jake Gordon scoring for the second time in three matches. It took two minutes- and a collection of orange segments and haribo- before the hosts drew level, Aaron Blair with a debut goal after his move from Dagenham and Redbridge- and Regent were soon ahead, Zack Littlejohn getting goal number two. That was that, and Regent go ahead of their visitors into nineteenth.

Cray Wanderers welcomed Margate to Hayes Lane, but weren’t very welcoming initially, Kyel Reid putting them ahead after just ten minutes. The Blues equalised eight minutes before the break through Martial Godo, and then went ahead seven minutes after the restart, Crossley Lema with the goal- but the Wands drew level sixteen minutes from time, Chris Dickson levelling. The hosts were level for just three minutes before Lewis Knight scored for the visitors, and this time the Blues held on, to take all the points and go eighth.

Wingate & Finchley got our first Premier Division goal of the afternoon as they hosted Haringey Borough- although it took half an hour to arrive, they kicked off at half one! Dylan Kearney was the scorer, his fifth goal in seven matches, but Borough were level just before half time, Michael O’Donoghue with his first of the season. Borough hadn’t won since September 25th, but they went two-one up when Andronicos Georgiou arrived at the back post to fire home and held on for three points.

 Canvey find form once more- but it’s Stowmarket who stay top Canvey score five- but there’s only one point between the top three. It’s our Pitching In Isthmian North round up