Small's a big man for K's 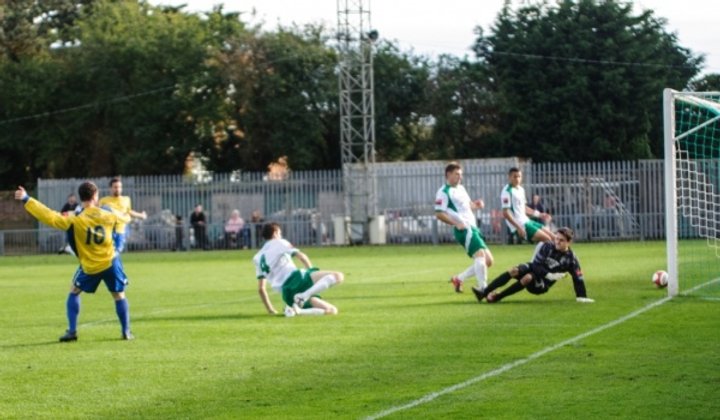 WITH the top four Ryman Premier clubs involved in FA Cup action, their closest pursuers had the chance to make up ground in the division’s first matches for three weeks – and they did.

Kingstonian and Whitehawk both climbed four places to take over first and second spot respectively with 3-1 home wins. But it’s tight: they and the three teams behind them all have 14 points.

Two goals by Wade Small were the key to Kingstonian’s victory over Lewes. He opened the scoring after nine minutes and, after a spectacular 20th-minute reply from Anthony Thomas, who lashed home from 35 yards, it was Small who struck again in the 38th minute. Worse was to follow for Lewes before the interval when Ben Godfrey was shown a second yellow card and Dean Lodge clinched it for K’s with 14 minutes left.

Whitehawk, in only their third season out of the Sussex County League, climbed to the highest position in their history by seeing off Wingate at East Brighton Park. The sides exchanged headed goals, with the visitors taking a 14th-minute lead through Dan Morris and Sam Gargan equalising 11 minutes later. Jed Wallace put Hawks ahead with a superb solo goal shortly before half-time and debutant Romone McCrae added the third, another header, after 75 minutes.

Bognor could have joined the group on 14 points with a home win over Wealdstone but a Richard Jolly goal early in the second half (pictured above courtesy of Steve Foster/Wealdstone FC) was enough for the visitors who moved up to seventh, only two points off the pace. Bognor skipper Kane Wills received a late red card.

Leiston drew for the third time in their four home league games. Gareth Heath put them ahead against Canvey in the 40th minute and the islanders made it 1-1 though Kevin Dobinson just after the hour with the hosts appealing for handball.

 Derby date for Rocks THE Ryman League's three definite FA Cup survivors all face away ties in the fourth qualifying round as they bid for places in the competition proper.
Scholars frustrated after bright start  POTTERS BAR doubled their lead in Ryman North tonight (Wednesday) but were left frustrated after taking only a single point from a 1-1 draw at Ilford.