Snappers and Bloggers: Daniel Magner- Two Men in Search Of The Beautiful Game 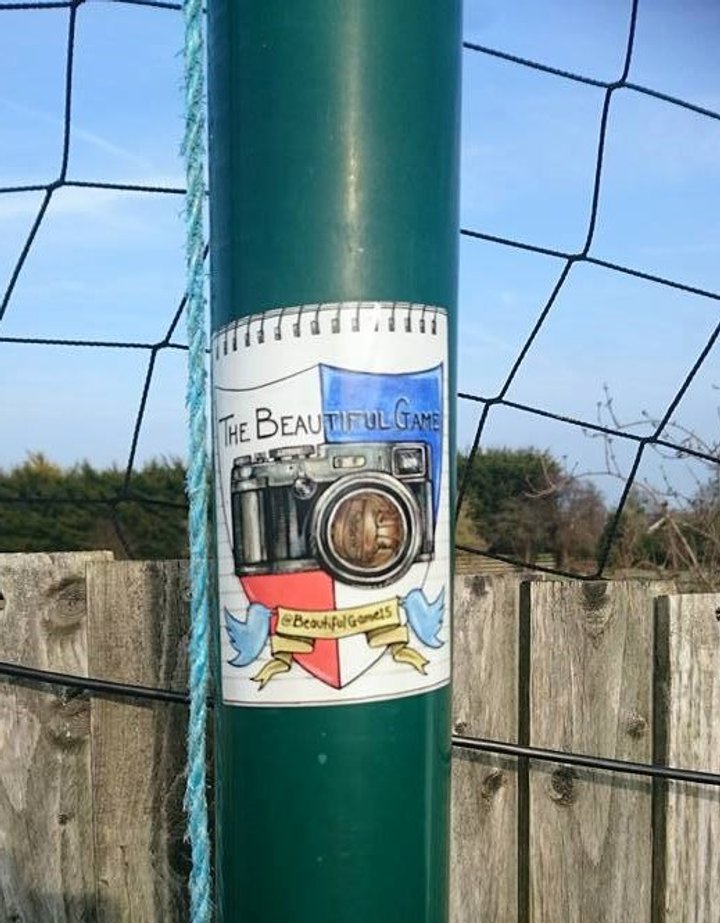 In our series finale- for now- of interviews with the people who write about and photograph our league, we meet up with Daniel Magner, the writing half of the Two Men who continually search for our Beautiful Game.

Daniel Magner and his friend Tom Sparks have been spotted at many of our grounds over the last few years, pointing a camera- or a video camera- complementing the burgers and generally just having a fabulous time. A permanent record of that fabulous time is then written up by Dan on their website, illustrated by the images Tom takes, and added to by their rather rambunctious Vlogs. We caught up with Dan to get the story behind their journey.

First and foremost, tell us about your football story. 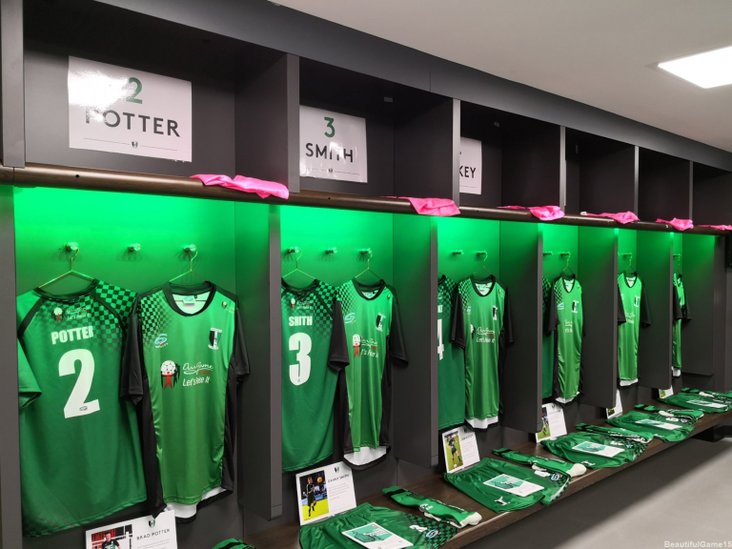 I don’t come from a traditional football family. My family wasn’t really interested in the game, so it was Euro 96 which properly introduced me to the game. My best mate at school was a Spurs fan, and I grew up in Muswell Hill/Wood Green, so it was easy to adopt Spurs as my club, and that’s how it happened. Tom grew up in an Arsenal supporting household, so his journey started much, much earlier than mine.

Five years ago at a New Years Eve party Tom and I were talking and realised that our love of the top level game had waned. We wanted to find a way to enjoy the game without the stress and depression, and Tom came up with a hare-brained idea of trying to watch every club inside the M25 in twelve months. I started to do some research, having no idea about Non League football until then, and I quickly realised quite what a mammoth task this would be. So we decided just to go to the closest, and that was Wingate and Finchley, five-ten minutes from where Tom and I grew up. Despite them being so local Tom and I knew nothing about them, but I dropped them an email and they couldn’t have been more welcoming. Five years later we’re entirely immersed in this complete universe outside of Ronaldo and Messi and the rest; it’s been a complete football education.

How long have you and Tom known each other?

Since we were teenagers at Secondary School- more than twenty years now. 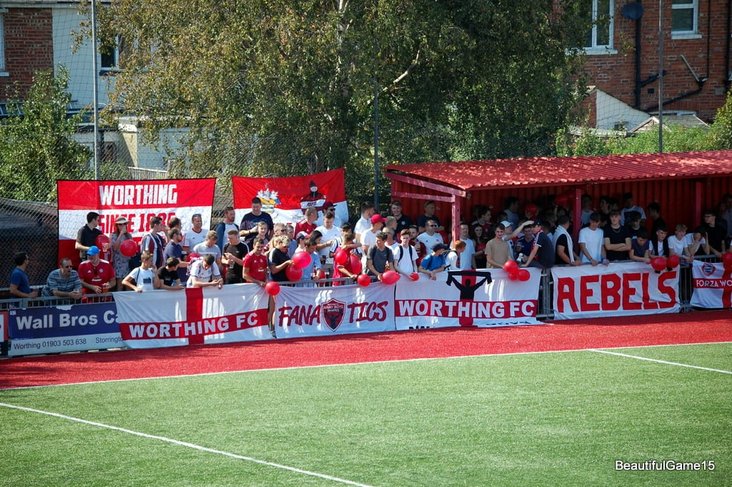 How, then, did that idea at a party turn into Two Men in Search of the Beautiful Game?

I had a dream of being a music journalist, and I’d dabbled, doing gig reviews and sharing them with my friends, and working around my horrendous dyslexia. I loved the writing, the process, the story telling; and Tom was already an aspiring amateur photographer, so we just thought we’d combine the two and document our findings. The videography came much later; Tom pushed for it, but I couldn’t believe that anyone would want to watch us watching football. I’d never seen anything like that and found the concept a little odd. It wasn’t until we went to Germany and covered three games, and Tom put together a video montage, that we realised there was a demand for it. People really liked it, and were really positive about it, so I relented and let him point the camera at us. Our first few videos were awful, we were so nervous and robotic, but we stuck with it. Tom does all of the editing, I do the blogging, and it all seems to work. It has been successful by accident rather than design, but we have thoroughly enjoyed indulging our creative side.

It’s perhaps become almost a gorilla marketing campaign, with the flag, the videos and the stickers. It’s generated enormous interest. Was that a design or a happy accident?

It’s completely stolen from other people! I can’t take any credit! The stickers, when we started, were an idea taken from the European Ultra movement, which fascinated me a little. These days more of the British clubs, Clacton, Dulwich Hamlet, Eastbourne Town, Worthing etc- all do that. It’s just a visual representation of what we do. The flag was perhaps inspired by a flag at Wingate and Finchley on that first day, which said ‘More Flags Than Fans,’ which was almost what we called our website! Tom came up with the alternative title, which he thought was less wordy!

That’s why you do the words, I take it?!

Exactly! We had the idea of getting the winning team to pose with it, and it’s perhaps a bit goofy, but it’s a memento for us and almost every team we’ve asked has been happy to pose with it. But it absolutely wasn’t thought out; it just happened.

What next, then? What are your future plans?

Tom and I are perhaps in a stage of our lives where we’ve moved away from our writing/photography aspirations. We’re both settled domestically, Tom has a career he’s happy with, I’m a stay-at-home Dad, and most of the other people doing what we do are about half our age, so have more time to push their work. We’re happy with where we are, with the amount of followers and interest we get, and it’s already quite time consuming. I think if it was going to blow up and we were to become blogging megastars it would have happened already. But we’ve had many joyous experiences, such as out time with Cray Valley PM at Wembley for the FA Vase Final on Non League Finals Day, which will stay with us as highlights forever.

Are you saying you’re happy for it to remain an enjoyable sideline, rather than a full time job?

Don’t get me wrong, I’d love to write about football full time, but I don’t think us doing what we do will realistically turn into something that would pay the bills. Tom is comfortable with his career and his trajectory, but I’d take some paid work if it was offered to me! We always wanted to shine the light on the positive parts of our national game; it’s easy to find fault, but we’ve always tried to go the opposite way.

That shows. There’s a great element of fun in what you do. Watching and reading your work, it’s just two blokes having a good time at football- taking a happy atmosphere and relaying it to a wider audience. Is that the way you try to present it?

That’s exactly it. Here’s hoping the Non League season gets to continue as we move forward so we can do more of it.

Out of all the articles you’ve written, which would be your favourite?

We wrote about Whitehawk, and that article was wonderfully well received so perhaps that one. I’ve written in excess of two hundred, so it’s difficult to chose one. It had a last gasp goal which was disallowed because the referee blew the whistle a split second before the ball hit the net, so it also had an element of controversy, and it was a great place to watch a game.

What are the three most memorable matches you’ve watched involving Isthmian League clubs?

The first would be a turgid match between Hendon and Margate, which was full of controversy. It was a Playoff Final (2015), which Margate won one-nil, but the game was really decided by a disputed red card for a Hendon player in the first half. The football wasn’t great, but the atmosphere was electric, and as a neutral it was great theatre.

A second would be the El-Classicoast between Worthing and Bognor Regis Town on August Bank Holiday Monday last year. The Worthing fans marched from the pub to the ground with a display of flares and flags, and the set up at Worthing is superb, it’s a great place to watch football, with a fabulous atmosphere. The game was excellent, Worthing won three-nil.

The third would be a match between Wingate and Finchley and Lewes, our first ever game, which was memorable in every way. But to be fair every Isthmian club we’ve visited have been fantastic; Haringey Borough, Bowers and Pitsea, Lewes, Dulwich Hamlet- so friendly and accommodating, and the league as an organisation, letting us cover cup finals and sharing our work, we’ve only got positive things to say about the League and its clubs.

Daniel and Tom’s work can all be found here. It’s joyous, and we suspect that you will adore it. Go and find out!

 Heath get a new manager- who is their old manager! And they are also making a significant boardroom change

Snappers and Bloggers: Stuart Tree- The Unscrupulous Kidney  In the fourth of a series of interviews with the people who write about and photograph our league, we meet up with Stuart Tree, Photographer, blogger and award-winning programme editor