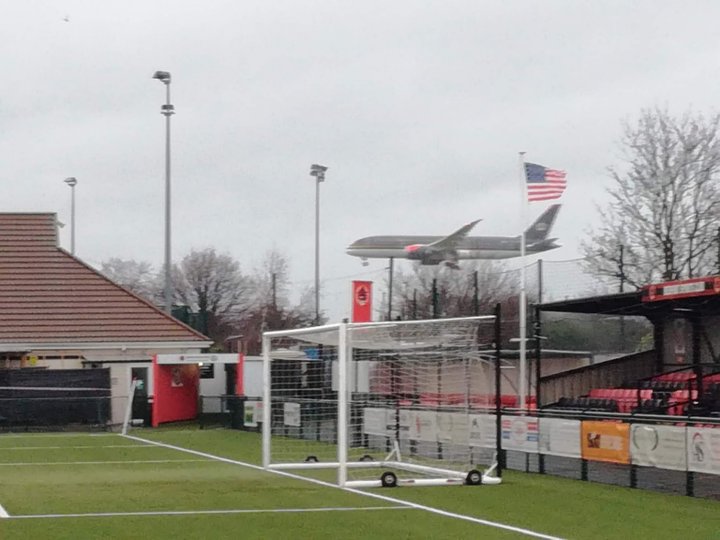 In the third of a series of interviews with the people who write about and photograph our league, we talk to Neil Laughlin, AKA Bob L. Hat, proprietor of Bobbles Blog.

Bobbles Blog, the work of Neil Laughlin, is a groundhoppers dream. Neil’s travels are not Isthmian based, although he regularly pops up- or should that be bobs up- at one of our grounds. He never seems to be at home, as he travels around the country- and indeed around Europe- in his seemingly never-ending pursuit to watch football in every location where it is played. We caught up with him on one of those rare occasions when he wasn’t on a touchline or behind the wheel heading towards one.

How did you begin writing about football? 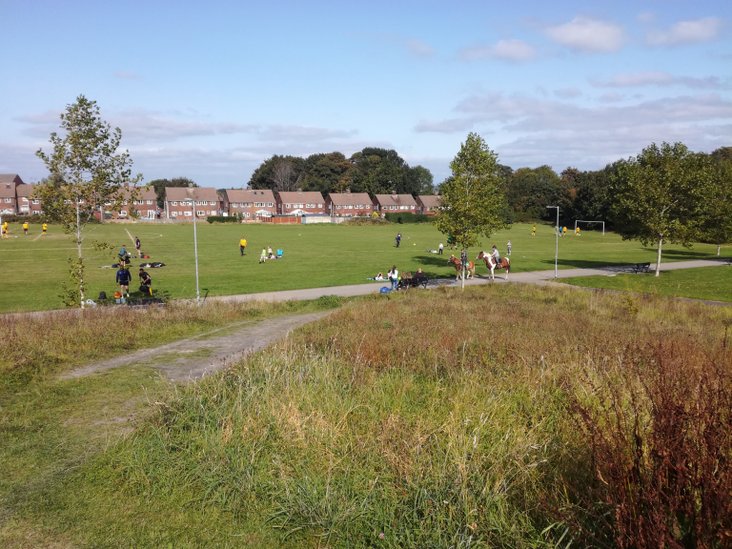 I probably started back in the mid nineties, when I was programme editor at Belper Town, but it became a broader hobby when I became the Southern League, South and Midlands correspondent for an early football website called ‘Football On The Net.’ I began blogging only three seasons ago, but that perhaps grew from the reports I used to write on the old Tony Kempster website (which morphed into Non League Matters, which is still superb). I desperately wanted to write but didn’t have an outlet for it, so that’s why I took up blogging and started my own site.

Looking at your Blog, you seem to cover the entire country. Is that fair?

So would you call yourself a groundhopper? It’s a term that some writers shy away from.

Yes, I would. It’s nothing to be ashamed of! There might have been a time when I would have rejected that term, but as I’ve got older I’ve embraced it. I love what I do, if I didn’t love it, I wouldn’t do it. It’s there in the public domain, it’s obvious that I love football and football grounds, I’m happy with the terminology.

As we speak, it’s the 16th September and you’ve already covered eight matches this month (thirteen by the 23rd, including his 1500th ground). Is it fair to say you’re a little obsessive?

I’d say I’m a man with routines and structures. For example, I try to watch a match on Tuesday, Wednesday and Saturday, occasionally on a Sunday. I get into a routine, and I struggled when it fell apart in the middle of March. I normally watch around one hundred and fifty games a season.

Do you ever go home?!

I’m at home on a Monday, a Thursday and a Friday, and I’m home before midnight on the other days! To be fair, my wife is a keen football fan, and a season ticket owner at Belper Town. She comes on quite a few of the trips with me. She knew what I was like when she met me and she understands it. And it gives her the chance to have the house to herself sometimes, and everything works well, it suits us both. If it didn’t, I either wouldn’t do it or we wouldn’t be together, so it must be working!

It must take up an enormous amount of your time, not just the travelling and the watching, but the writing. What you produce isn’t short on detail. Some bloggers produce half a dozen pictures and one hundred words, but you don’t fall into that category. How do you manage your time?

I’ve always had a passion for writing, and I find that once I start I can’t stop. It takes less time than you might think, once I get into the flow it seems to come fairly quickly. I tend to write it in my head on the way home so I have it just about worked out before I turn on the computer. It isn’t a labour, a task, it’s fun. It’s kind of natural.

What do you enjoy the most? A top level match at a top class stadium, or a Sunday morning watching two pub teams on a windblown pitch? You seem to do a fair amount of both.

You have to take each experience at its merits. I love the top class stadiums, the new Spurs stadium, Borussia Dortmund; these are the type of places that all football fans want to visit, the type of places you never forget. But you can’t compare that with Sunday morning football, which is a totally different cultural experience. One of the frustrations I have when you hear supporters- or journalists- who watch the top levels of the game denigrating Non League football, for example, is that they’re not comparing the same product. I would say I’m as happy in Signal Iduna Park or White Hart Lane as I am in a park on a Sunday morning. I get to watch a game of football in a new environment with new people either way, and it’s always fun.

In all the time you’ve been writing, what has been your favourite article- and why?

I would think my favourite would have been a trip I took to Derry City, in the North of Ireland. That was a very personal article, my grandfather is from Derry, and I never met him, as he died when I was six months old. Back in the mid two-thousands I decided that I was going to visit the city. None of my family had been back since he left during the war, and I made the trip, watched the football, met some lovely people, and have been back twice a year since. I told my story in the blog; I talked about the time I took my father over there, the time I took my wife, the history and the politics of the place- and it gave me perhaps the most satisfaction of anything I’ve ever written because it told a real story, one which continues to evolve. The feedback I got from the club, from my family, made it really special. I ended up writing for the club programme.

Was that perhaps the moment when you thought, “do you know, I’m quite good at this?”

There have been times when I’ve thought that, and others when I thought I was boring and repetitive. The challenge is to find a different angle and perspective every time you write. I suppose my strength is my ability to find an angle that others might miss. I couldn’t, for example, write a match report. The match is only part of the experience, not the whole.

What are the three most memorable matches you’ve attended involving Isthmian League clubs.

I was on a training course in Potters Bar, and I knew there was a game in St Albans, and I’d never been there. I loved the ground, the ok tree behind the goal, the old stand, clubhouse above, but once the game started what I saw was a quite brilliant Canvey Island side. At that point they were moving through the leagues, winning trophies, and I’m sure they weren’t a cheap team to put together but they were fantastic to watch. What they delivered that day was one of the best Non League performances I’d seen for a long, long time. I caught Canvey on their rise, and it must have been so special for the supporters of the club who were watching it happen. One of the great Isthmian teams of the modern era.

My second match would be from the back end of last season. I went to Bedfont Sports, and watched as they defeated Hertford Town one-nil. It was the day that Storm Dennis hit us, and much football was wiped out all across the country, there were weather warnings, high winds, closed bridges, so I decided to do the sensible thing and drive from the East Midlands to London- perhaps more in hope than expectation. The club had tweeted that the game was on, but I still had my doubts- perhaps I was worried that a plane from nearby Heathrow Airport would decide to land on the pitch rather than the runway- but I drove down nonetheless, was assured that the game was on, and really liked the place; a cracking, quirky little ground, nicely set up, good seating, quite individualistic.

The game, sadly, was awful. So awful that I had time to work out that a place landed at Heathrow every ninety seconds. They were coming in sideways, but every ninety seconds nonetheless. I was all set up for a nil-nil, and then in the last minute Bedfont got a penalty, which they subsequently took and missed. But in injury time Town gave the ball away, Bedfont broke, and they finally scored (Veron Kokurinkov). I suppose what made it memorable was the whole experience, it as the kind of day I’ll never forget.

My final game takes us back to March 1995, and it was an FA Vase Semi-Final second leg between Oxford City and Belper Town. I was programme editor at Belper, and we had lots of family history there; my dad has been involved with the club for forty years, it was a big part of my childhood, my life. So it was, as you can imagine, an important day for us. (You can watch a video report of that match by heading here.)

We had a fantastic run in the competition, defeated another Isthmian club, Metropolitan Police, in the Quarter Final, and then won the first leg of the semi-Final at Belper, one-nil. It was such an exciting time in the club’s history. In the second leg, which was played on a Sunday, I travelled down, stood behind the goal, and we went one-nil up early on, and then it all unravelled, we ended up three-one down, three-two on aggregate, missed a great chance to equalise, and that was that. Until it came to the following day, when it came to light that an Oxford player, Darren McNamara, who had played in the second leg, had only been signed two days before the first leg.

What ambitions do you have, going forward?

I’d like to see a full season played this time! Ultimately I suppose my ambition for the next few years is to complete Steps One to Four, and then once the situation changes I want to get abroad more, to see the the lower division clubs in Northern Ireland, and I’m only four or five teams away from completing the top flight of the Dutch League, so I’d like to do that.

Finally. what advice would you give someone just starting to write?

Firstly, write about what you enjoy. That makes it much easier. Be yourself; don’t try to conform to what you think someone else likes. And be balanced, try to avoid controversy, as people won’t share your work if they don’t like it or are offended by it.

You can read Neil’s work- and there is much of it to read- by heading to Bobbles Blog, which you will find HERE. And you’ll undoubtedly see him at an Isthmian League ground soon!

 Midweek round up! Our midweek football started on Monday and ended on Wednesday, and we still have three one hundred percenters in the Premier Division. Here’s our round up of the action from across the league

Snappers and Bloggers: Phil Annets, FA Cup Factfile  In the second of a series of interviews with the people who write about and photograph our league, we catch up with Mr FA Cup, statistician and writer Phil Annets of FA Cup Factfile.