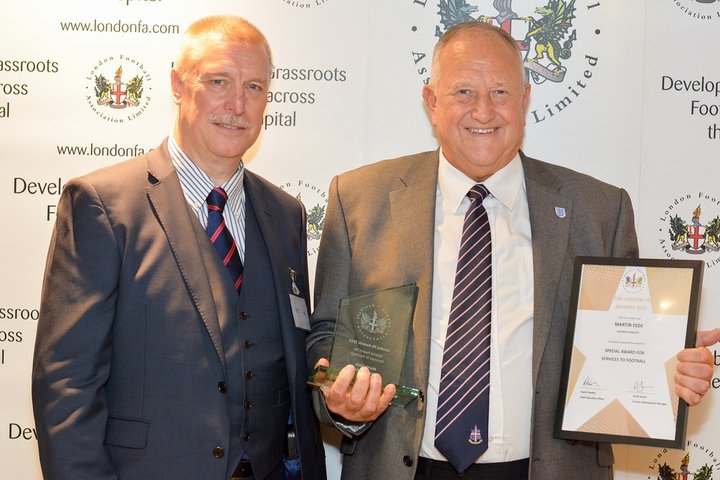 Dulwich Hamlet's chief executive Martin Eede should give himself a well deserved pat on the back this weekend before seeing his side kick off against Farnborough in the Ryman League's top flight.

After collecting plenty of awards over the decades for the clubs he's served, Eede has been making room at home for a personal honour this week, the London FA's Special Award for Services to Football.

Eede, who is pictured collecting his inscribed certificate and glass trophy from London FA chief executive David Fowkes, was honoured on Wednesday night at Wembley Stadium in front of a record crowd at the association's tenth annual awards, hosted this year by BT Sports presenter Lynsey Hooper.

Along with 25 other winners, the 67-year-old collected his accolade in front of a host of industry professionals, an army of dedicated grassroots volunteers and London FA special guests and playing legends Gary Mabbutt and Rachel Yankey, pictured below. 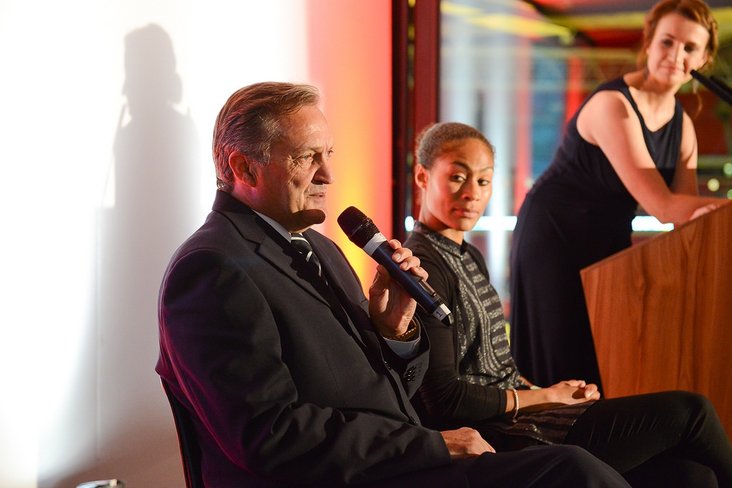 Not many in Non-League and the Ryman in particular, would argue with Eede being singled out for his contribution to the game. Before joining Dulwich in 1995, he was chairman and manager at Worcester Park and Molesey before managing Redhill. During his first 12 years at Champion Hill before returning after a four year stint at Fisher, Eede also managed Hamlet from 2001 to 2006, winning the London Senior Cup in 2004 along the way. As well those duties, he also squeezed in a spell as the club's groundsman!

Married with a grown-up daughter, since moving to the West Country in January the Dulwich stalwart now travels all the way from his new home to support the south Londoners and carry out his current role as chief executive.

At the Ryman League's annual awards in June his efforts in that role was also highlighted when he collected the Barry East Trophy for the club's work in the community last season.

* With Hamlet away on NLD 2015 in Hampshire on Saturday, the club staged their own early NLD event last Saturday when they hosted VCD Athletic in the Ryman's Premier. The fixture attracted a bumper crowd of 1961 and officials estimate that over £3000 was raised for the British Heart Foundation and a local arts charity.

 Awards now come with bubbly! The Met Police's players can look forward to a bubbly bonus over the rest of the season after the Ryman Premier club teamed up with The Good Wine Shop in Esher.

League stands up for NLD!  The Ryman League’s clubs are lining up in numbers again to support Non-League Day for the sixth season running.