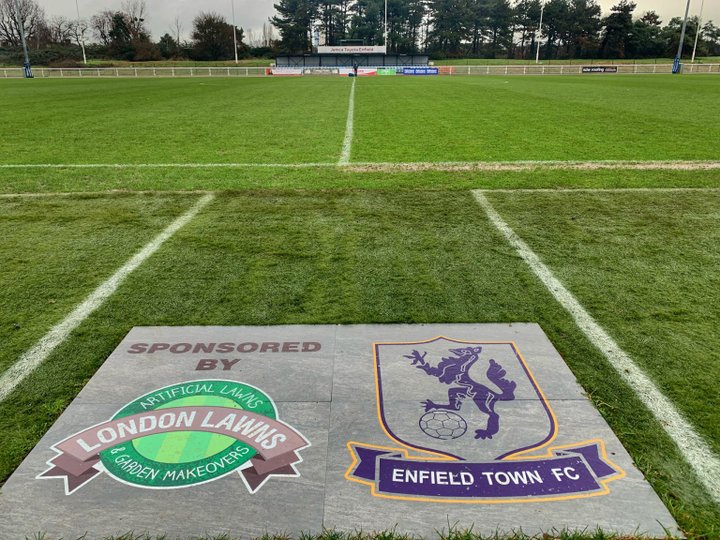 Third place Enfield Town could move up to second place in the table if they can defeat Bowers and Pitsea at the QEII Stadium.

The hosts haven’t been in the best of form lately, having taken only eight points from their last six matches, but they will be in reasonable confidence after going unbeaten in their last two and will also know that Bowers form has been far, far worse, Rob Small’s side having lost five in a row before hitting the road to North London.

The sides have only ever met four times, Enfield winning three- but the last time, back in December 2019, things were rather different- Bowers triumphed by four goals to nil, with goals from Lewis Manor (2), Quentin Monville and Bradley Warner.

By the way, the Towners are doing two for one offers on Match Day Programmes. KitKats, ETFC Choc Bars and T-Shirts this evening- home fans will have to hope that if they concede a goal, Bowers aren’t given two!

Brightlingsea Regent host Potters Bar Town on the Essex coast, and they are letting everyone in for free! That’s right, no money at all. Regent have seen a good spell of form come to an end, losing their last four matches, whilst the Scholars have taken only six points from their last eighteen, so this is a big match for both teams.

The two have previously met four times, with one win for Regent and two for the Scholars. The last meeting, in February 2020, was a goalless draw.

Our top-billed match in the North Division tonight sees Canvey Island given the chance to go back to the top, as they travel to AFC Sudbury. A point would do it, but the Gulls have won four of their last five and look to be approaching their best form once more, whilst the hosting Yellows have been a little more shaky, with only one win from their last six.

Felixstowe and Walton United are definitely in promotion form, even though they sit in twelfth place. The Seasiders are unbeaten in six and have taken a colossal sixteen points from that eighteen- and another win tonight will take them tenth. They travel to face Basildon United, seven points behind in sixteenth place, and having lost four of their last five- each of them by two goals to nil. That’s a pattern they’ll be looking to shake off.

We’ve only one match in the South Central tonight, but it’s a rather big one! Second place Chertsey Town welcome fourth place Uxbridge, both sides hoping to close the gap on runaway leaders Bracknell Town.

The Curfews have lost only one league match this season, and have won eight of their last ten; whilst the visitors have lost double that number- yes, they’ve been defeated twice! Four points separate the two, with Uxbridge having lost to Bracknell last time out- their first defeat since September 18th, when they lost to…Bracknell.

Our one match in the South East Division is a Kentish derby, as Faversham Town welcome Herne Bay. Mind you, with twelve Kent sides in the Division, almost every match seems to be a Kentish derby!

The Lilywhites have been in up and down form, and start the night in twelfth, sixteen points and six places below their visitors. With three consecutive defeats and only one win from six the hosts will want to restart their campaign; whilst Bay are five unbeaten but have lost ground by drawing their last two. That said, with only two points separating second from sixth, they’ll go second with a win tonight- and this is their game in hand over the four sides directly above them.

We have one match in the Velocity Trophy Third Round, and it should be entertaining as both hosts Chichester City and visitors Folkestone Invicta have been in fine form. City have only two defeats in their last ten, whilst Invicta have lost only one of their last seven league matches, and will be hoping to quickly bounce back from defeat at 'moneybags' Wrexham in the FA Trophy on Saturday.