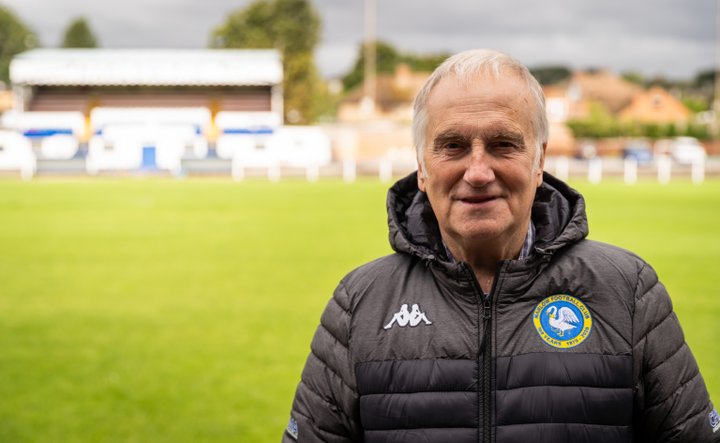 Terry Staines, Chairman of Pitching In Isthmian South Central side Marlow, talks about the challenges brought by Covid- and his hopes for the future

TERRY STAINES has seen ups and downs aplenty during his 46-year association with Marlow FC but the club chairman admits the coronavirus pandemic has posed questions he is still working out the answers to.

The Blues were 11th in the Isthmian League South Central Division when the virus brought the 2019/20 season to a halt, signalling a period of financial and logistical instability for Marlow - the only football club in England to have applied for entry into the FA Cup every season since its inception in 1871.

While the break in play has allowed volunteers at the club to work on pitch and ground improvements ahead of the new season, the lack of matchday revenue was compounded by the impact of being unable to stage summer events such as local cup finals. And while Staines – who donned the Marlow blue as a player before taking on his current role in 1995 – admits the gradual easing of restrictions isn’t without its difficulties, he is buoyed by the return of football and its impact on the local community.

“In terms of income for the club and interest in the local area, the last few months have hit us hard,” said Staines. “The month of May in particular usually generates a lot of cash for the club, and obviously we haven’t had that this year.

“That’s made paying for things like training facilities that bit tougher, as well as financing improvements around the ground because there are always things that need to be done.

“We’ve managed to work on things like the pitch - which looks great ahead of the new season - but sadly our finances don’t look quite as good.

“Being able to welcome supporters back to games and members of our youth and female teams is really positive though, because I think the lockdown did have a big impact on the community in that respect.”

The ongoing security of Marlow – celebrating its 150th anniversary this year – and other members of the Trident Leagues - the Isthmian, Northern Premier and Southern Leagues - has been boosted by a flagship partnership with Pitching In, aimed at supporting and promoting grassroots sport in the wake of Covid-19.

The multi-million-pound, multi-year investment programme will deliver vital financial assistance, with that help supplemented by an emphasis on community volunteers pitching in and contributing themselves.

A Pitching In volunteering scheme will be established to help further strengthen the already prevalent community ties, with clubs also having the opportunity to apply for grants to ease the financial strain of lockdown.

The programme has also grabbed the attention of football royalty, with former England captain Stuart Pearce offering his support having started his career at Wealdstone FC.

Staines added: “We’re fortunate to have strong partnerships with sponsors already, but extra financial help is crucial to all clubs at our level, and it will help us try and maintain Marlow FC for another 150 years!

“The community aspect of the scheme is really important and exciting. I’d love to develop our integration with local people, and encourage more children and girls to get involved both playing for our youth team and coming to watch games.

“There are always ways people can help out at Marlow. We’re a community club and we can only continue to look forward to the next game as long as people volunteer, so hopefully this new partnership can help that.”

GVC is launching a new multi-million-pound investment programme, Pitching In, designed to support and promote grassroots sports and is being launched with a flagship partnership with The Isthmian, Northern Premier and Southern Leagues - collectively known as The Trident Leagues. For more information visit:

 Pitching In Isthmian Supporters Predictions 2020-21: Hertford Town We're off to Hertingfordbury Park, for the views of David Laws. He mentions Ware a couple of times, but we think he got away with it...

Barking open their new 3G pitch on Saturday  And they do it with not one but TWO friendly matches!