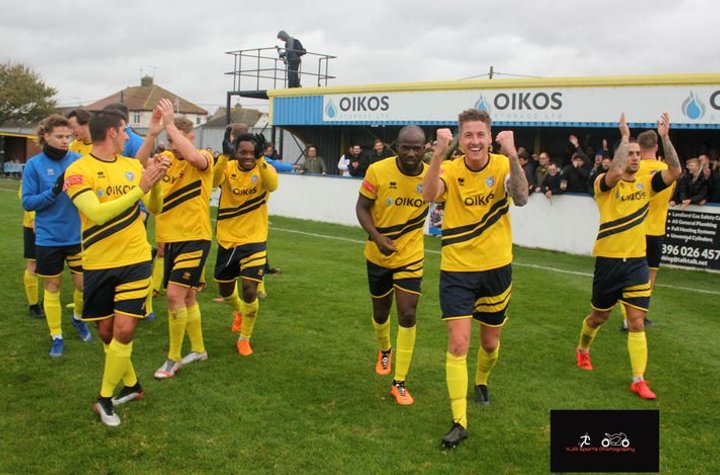 On a wet and extremely windy October afternoon, Canvey were attempting to make the First Round of the FA Cup for the first time in 16 years. Cray Wanderers were doing well in the Isthmian Premier so Isthmian Division One North Canvey would have a tough task to beat their higher league opponents.

Canvey had already negotiated 4 tricky ties in getting this far, but could they make it a 5th?

In front of a covid-restricted 400 fans at Park Lane, Canvey made a whirlwind start finding themselves 3-0 up within 25 minutes.

Two excellent finishes by Evans Kouassi and an absolute piledriver from 25 yards from Conor Hubble put Gulls in a commanding lead and it could easily have been more.

The second half, though, was a different story. Backed by a strong swirling wind, Cray started to take control of the game. A Joe Taylor penalty on the hour reduced the arrears and suddenly Canvey’s backs were against the wall when a long range effort made it 3-2 with 20 minutes still remaining.

Canvey though produced a heroic defensive display with keeper Bobby Mason making a number of excellent saves and defenders throwing their bodies on the line to keep Cray at bay.

It was a magnificent cup tie with both sides playing their part despite the awful conditions. The atmosphere was superb with the Yellow Army making plenty of noise and without the Covid restrictions the crowd would almost certainly have been around the 600/700 mark, maybe more.

Despite Cray throwing everything but the kitchen sink at the Canvey defence, Gulls held out for a tremendous victory to take their place in the First Round draw.

A fortnight after this game, the UK went into a second lockdown and Canvey had to play their next two FA Cup games behind closed doors. It didn’t prevent the Gulls from beating Banbury before bowing out to Boreham Wood in front of the BT Sport cameras. 2020 has been a horrible year but at least Canvey fans had several memorable moments to savour.

There's still time for you to send in your 2020 highlights. Email Ian on townsendaround@gmail.com.

 The best of 2020: Finley Chung, Cheshunt We asked for your favourite moments, and Finley takes us to the Dripping Pan, and recalls a six-one victory