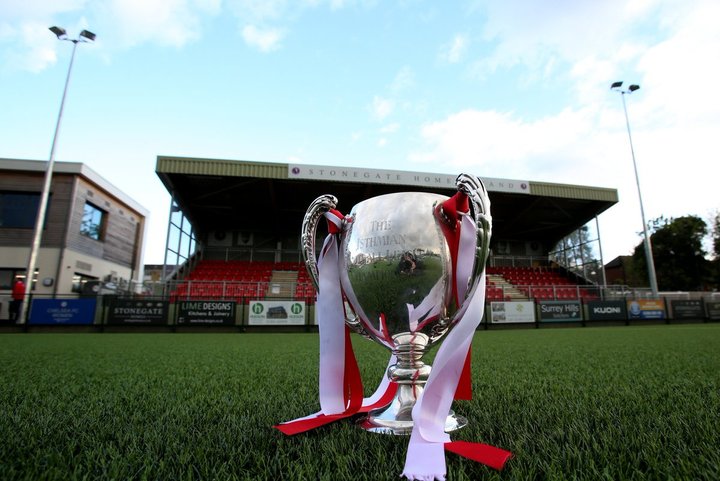 Over the last few weeks we’ve been asking supporters from across the League to choose their Bostik First XI. Based on their votes, here’s our Supporters Team of the Year for the Premier Division.

The votes are in, and they’ve been counted, checked and checked again. They’ve created debate, as well as bringing praise and- occasionally- derision. They’ve seen some of our supporters greatly favour their own team, but they’ve also seen partisan views put to one side as people focus on choosing the best players even if they play for a local rival.

We’ve been a little fluid about the formations, mainly because you tended to favour centre-backs and sometimes struggled to draw a line between who was a midfielder and who was a forward. The players who feature are those who had the most votes- alter the formation in your head accordingly!

OK, here- just for fun- is the final outcome. We bring you our Supporters Team of the Year for the Bostik Premier Division.

The Blues may have spent most of the season in a relegation battle, but that hasn’t stopped Summers Lane keeper Shane from picking up the most votes and being named Supporters Goalkeeper of the Year. It seems that it was not just for his excellent goalkeeping- which came to the fore particularly as his side became cup giantkillers again and again- but also for the way that he engaged with opposition supporters.

Only three Tanners players featured prominently in our voting, but only one other player across the entire League featured in more of our Supporters First XI’s than the defender who leaps like an, erm, Salmon! The pride of Fetcham Grove. Will made forty seven appearances across all competitions as the Tanners narrowly missed out on Playoff qualification.

Merstham had the best season in their history, and Ollie was an enormous part of that, showing form that was noticed by supporters across the Division (and perhaps beyond, if rumours of professional clubs watching him turn out to be true). He made thirty seven appearances across the season.

It’s rather ironic that two of our four chosen defenders managed to get sent off for tussling with each other in the Premier Division Playoff Final, but let’s put that behind us and celebrate the phenomenal season that both Sonny and Ollie had for their sides! Sonny had a superb season for Angels, turning out fifty times, dominating opposition forwards, and even managing five goals at the other end. Promotion was his reward, and it was a reward which was richly deserved.

Sami has two promotions in three seasons on his CV, having followed up his Playoff win with Bognor Regis Town by romping to the title with Dorking Wanderers. Marc White’s side were highly tipped before the season started, and that faith was reflected on the field- the twenty two points between Wanderers and their closest rivals telling the entire story. They scored more goals than anybody else, and conceded less- and Sami was an integral part of that mean defence, turning out forty five times.

Joe was by far our most admired midfielder, and it’s no surprise. He played fifty four matches last season, and managed to find the back of the opposition net on seventeen occasions, not only becoming a fan favourite at Longmead but being a prime reason why Angels managed to win not one but two Playoff Finals. We’ll miss him next season, but National League South defenders will be sick of the sight of him.

Hard working, cultured and much admired by his own supporters and those of the opposition, Kenny was one of the driving forces behind the Moatsiders success last term. With forty five appearances across the season he drove his side on towards unprecedented success.

We head back to our champions for the second- but not the last- time, where you chose to recognise the sterling performances of Lewis Taylor. Taylor is the archetypal box-to-box midfielder, the former AFC Wimbledon player- who of course also turned out for Kingstonian prior to moving to Westhumble/Meadowbank- scoring six goals as Wanderers swept to the title.

David Ajiboye (Worthing)
With twenty one goals last season, the former Brighton and Hove Albion man has unsurprisingly been coveted by teams at a higher level, and has already departed Woodside Road to ply his trade with Sutton United in the National League. He certainly impressed our supporters last season, and got a very high number of votes accordingly.

It’s difficult to find enough superlatives to describe Jamie Cureton. It’s also difficult to understand how a player who has now played more than one thousand senior matches continues to perform at such a high level, but he shows no signs of stopping, and added another twenty five goals to his total during the last campaign. Stortford just missed out on the Playoffs on the last day of the season, but don’t bet against him firing his side to even greater success next time around.

You might remember that, earlier in this list, we explained that only one player across our entire league picked up more votes than Leatherhead’s Will Salmon. Even Tanners fans will struggle to feel aggrieved that the player in question was Dorking Wanderers striker Jason Prior. Jason found the net twenty seven times across all competitions, but it wasn’t just his goalscoring that caught the eye. Nor was his success surprising- he’s been delivering goals and exceptional performances across the Bostik League and beyond for years, particularly with Bognor Regis Town and Havant & Waterlooville.

If we were to announce a Supporters Player of the Year from across the Bostik League, Jason Prior would wear the crown.

Thanks for all of your votes. We hope you enjoyed reading the Teams of the Year submitted by our supporters, and we’ll be back with our Supporters Predictions for the forthcoming season in July!