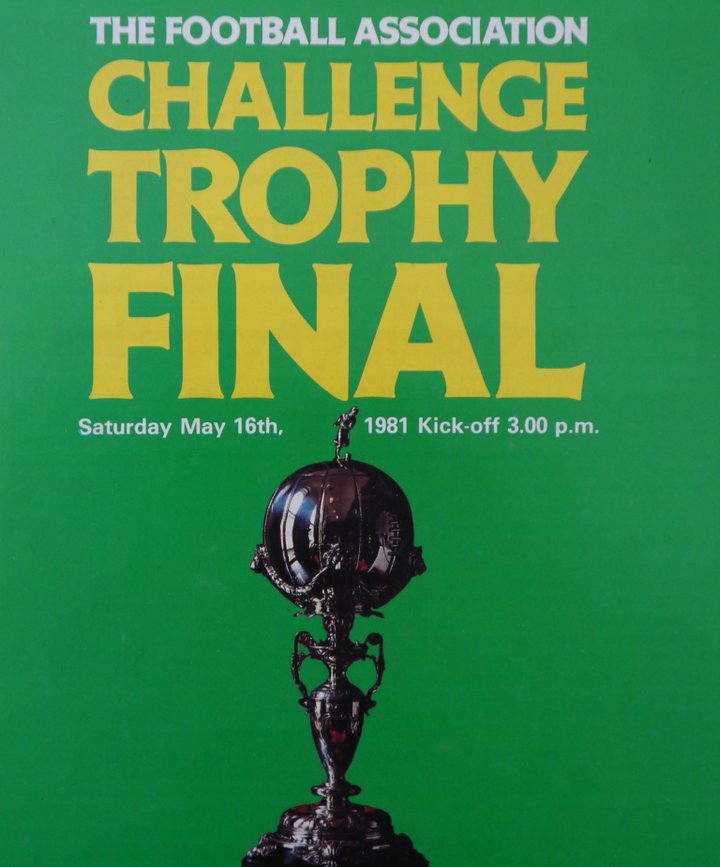 It’s time for a kick up the eighties, as the fight for the Isthmian League title went to the final day, whilst two of our clubs made the trip to Wembley to compete in the FA Trophy Final.

The 1980-81 season kicked off with Enfield our reigning Isthmian League champions, and Leytonstone Ilford starting their first ever Premier Division campaign as a merged club, having won the Division One title during the previous season. Bromley joined them in the top flight, whilst their places in Division One were taken by Billericay Town and Lewes, promoted from Division Two.

In the professional game, Liverpool came into the season as reigning champions, West Ham United held the FA Cup, whilst Nottingham Forest had been European Cup winners for the second time in a row. The 1980 European Championship ended with England knocked out of the tournament by their second match, after seeing a significant proportion of their fans behave like morons during the first one- until they were tear gassed by Italian police. 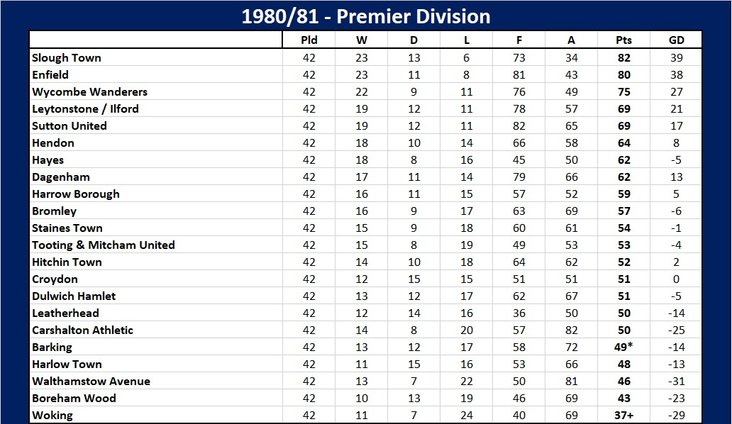 The opening day was August 16th. The Winners Takes it All by Abba was- rather appropriately- at the top of the music charts, and it was a day of musical departures as Jools Holland announced he was leaving Squeeze, Cozy Powell drummed with Rainbow for the last time at the Monsters of Rock Festival at Castle Donnington, whilst another drummer, Bill Ward, was still with Black Sabbath but about to leave- and did so a few days later.

On the evening of 16th thirty seven people tragically lost their lives in the Denmark Place fire, as an angry drunk set fire to a building containing two unlicensed bars. 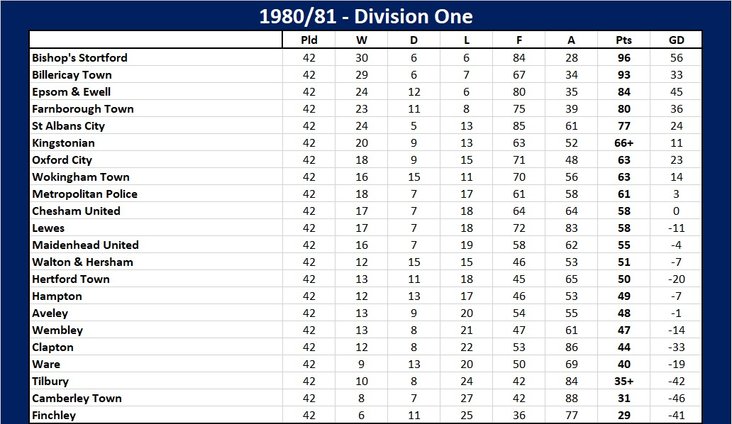 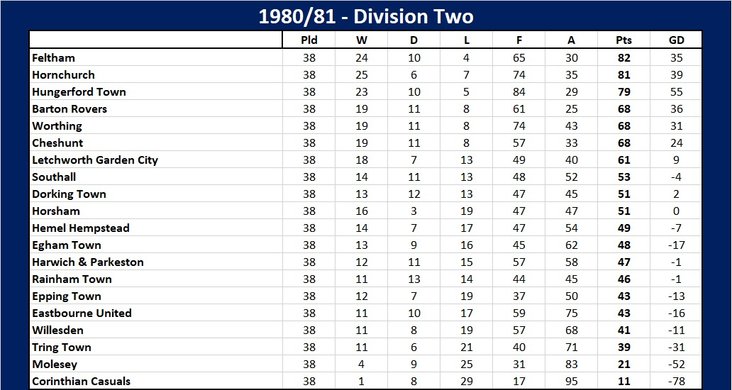 The Premier Division title race went down to the last day of the season, and the club to emerge victorious was Slough Town. Both Slough and Enfield won the same number of matches, twenty three, but Town emerged victorious because they’d ended the season with two fewer defeats than their biggest rivals. Both matches between the two sides ended goalless.

On May 5th Enfield entertained Woking, their last match of the season, and emerged with a three-one victory. Slough's final match saw them travel to Sutton United, whom they'd defeated 3-2 just a couple of weeks beforehand, knowing that they needed to take something from the match, as they were behind their rivals on goal difference. They emerged victorious by two goals to one. It was Slough Town’s first Isthmian title win, and they were to take the last title of the decade too, a far more emphatic triumph in 1989-90.

The other FA Trophy Finalists, Bishop’s Stortford, held aloft the Division One trophy by finishing three points ahead of Billericay Town, whilst Division Two was a three horse race, Feltham winning by a nose- and a point- from Hornchurch, the Urchins two further points ahead of Hungerford Town. Corinthian-Casuals propped up the League, winning only one match all season, ten points behind Molesey, who won only four. 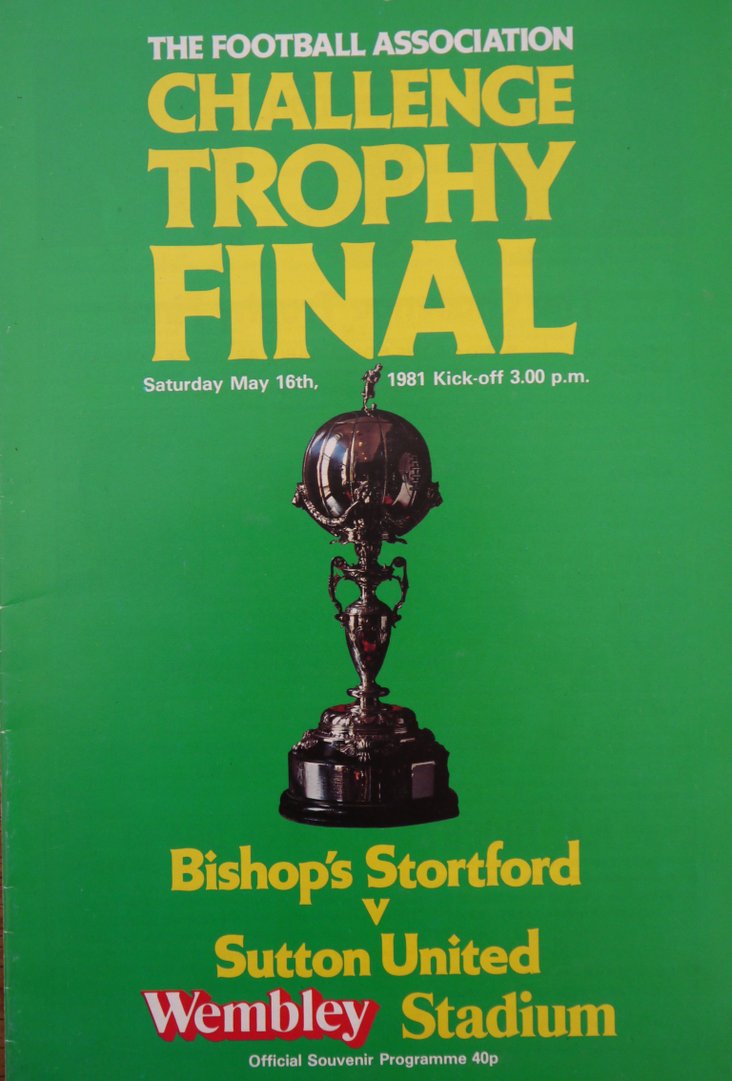 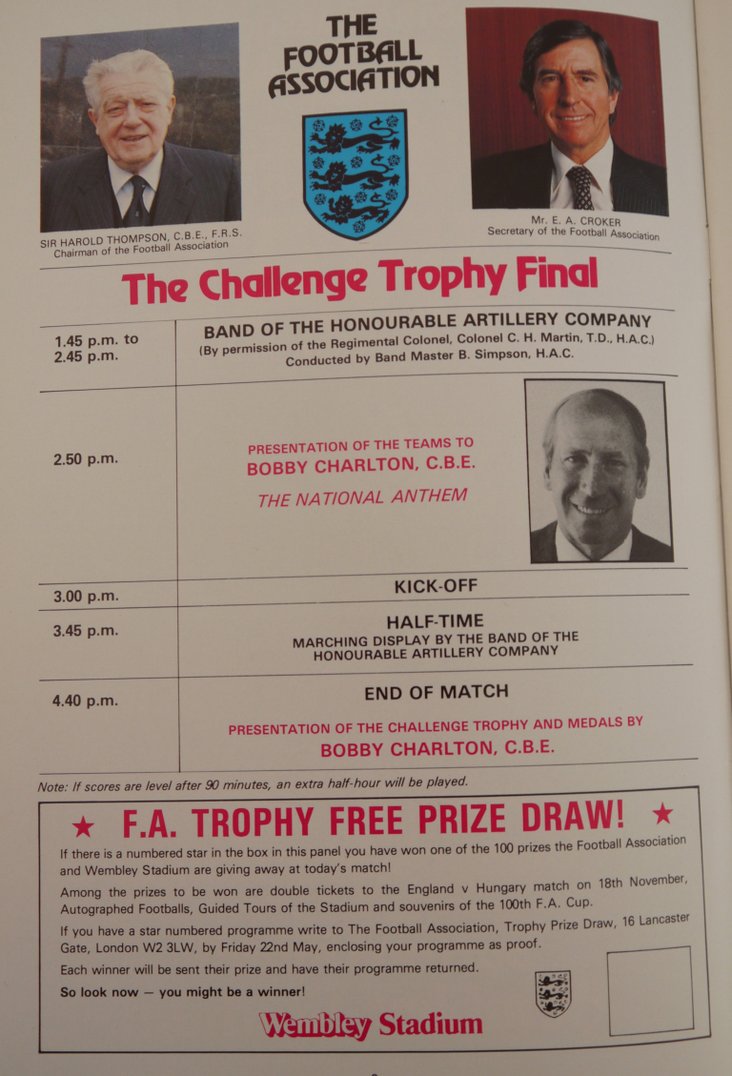 We don’t have attendance figures for most of the matches, sadly- but the highest we have is the two thousand, one hundred and twelve who watched Slough Town entertain Wycombe Wanderers. Town triumphed by two goals to one. In Division One one thousand and sixty nine watched the title battle between Billericay Town and Bishop’s Stortford, a match which the visitors won one-nil, whilst we have no attendances for Division Two. 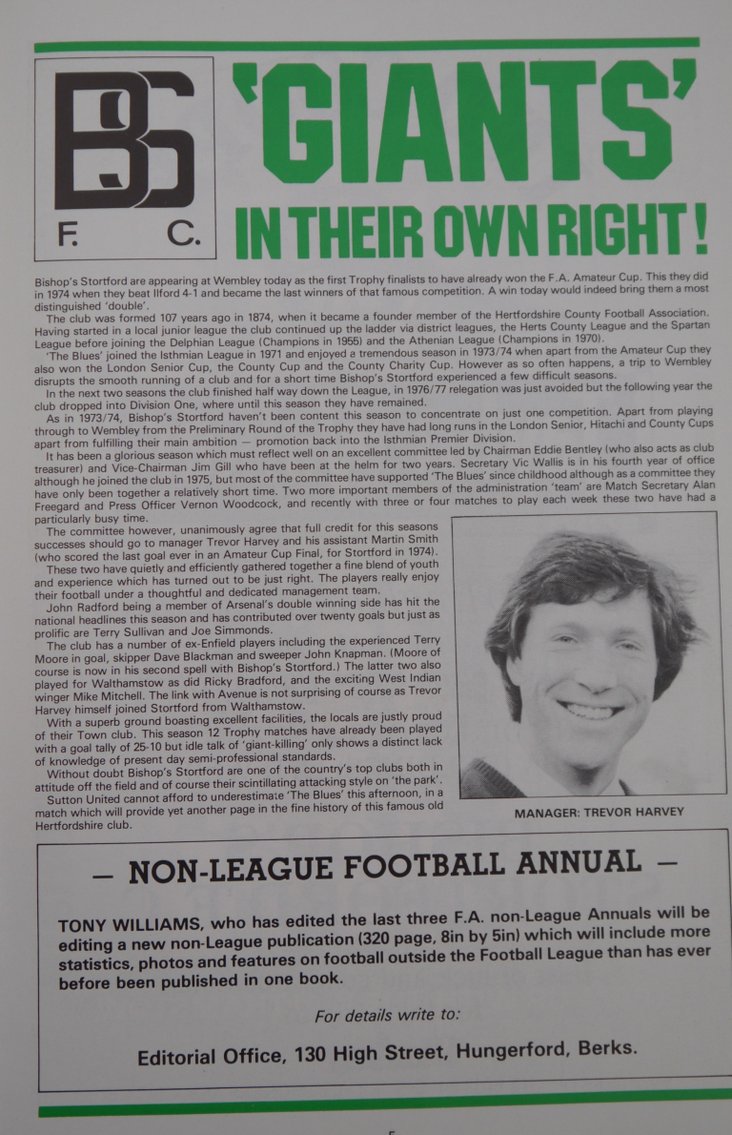 The one hundredth season for the FA Cup was an extremely memorable one for Enfield. Adter starting in the 4th Qualifying Round, when they defeated Isthmian side Epsom & Ewell five-nil, they faced another of our Division One sides in the First Round, Wembley, winning three-nil. Hereford United were up next, and travelled to North London only to lose two-nil, and a Third Round trip to Port Vale ended in a one-all draw which was turned into a three-nil victory in the home replay. The Fourth Round saw a trip to the coalfields of Yorkshire and a one-one draw at Barnsley, before the replay, played at Spurs White Hart Lane, saw Enfield finally bow out, losing three-nil.

St Albans City defeated four Isthmian sides to reach the First Round; Chesham United (1-0), Harrow Borough (4-3), Dulwich Hamlet (2-1) and Harwich & Parkeston (3-0 after a 1-1 draw). In the First Round they defeated Gravesend and Northfleet one-nil, before falling in a replay to Torquay United, a one-one home draw being followed by a four-one away defeat.

Dagenham bowed out at Gillingham at the First Round stage, as did Wycombe Wanderers, three-nil losers at home to Bournemouth. Leatherhead departed five-nil at Exeter City, Barton Rovers went down two-nil at Torquay United, and Harlow Town entertained Charlton Athletic and lost by two goals to nil. 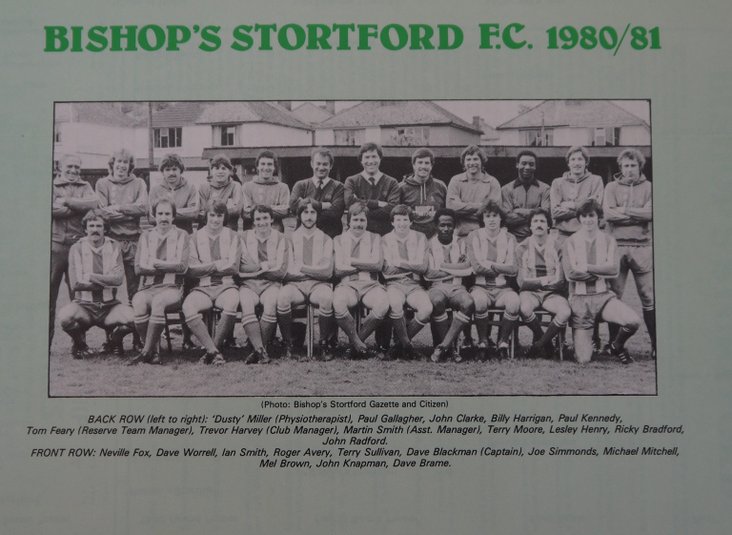 By the time we got to the Third Round of the FA Trophy our sides made up five of the sixteen sides remaining, but things looked much less positive by the Quarter Final- the next round- when we had only two left, Bishop’s Stortford of Division One and Sutton United of the Premier Division. However what we lacked in numbers we made up for in class, as those two sides managed to avoid each other in the Quarter Final and Semi-Final draws and made it through to contest the Final, held at Wembley Stadium on Saturday 16th May.

Stortford got to Wembley after defeating Spalding United, Chelmsford City, Kingstonian, Hendon, Bridgend Town (after a replay), Dagenham (after a replay), Alvechurch, Worcester City, and then Dartford in a two-legged Semi-Final.
Sutton United had played only seven matches to Stortford’s twelve, defeating Woking, Wycombe Wanderers, Bedford Town, Aylesbury United after a replay, then Bangor City six-three on aggregate over their two-legged Semi Final.

Bishop’s Stortford lined up for the Final as follows: 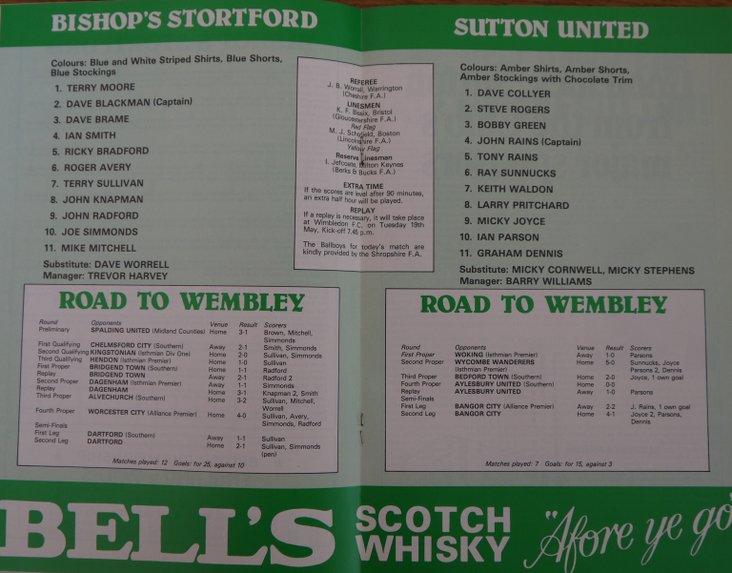 Moore had played for the club in their FA Amateur Cup win in 1975, whilst Smith had been a professional with Tottenham Hotspur. Bradford had formerly played for Sutton, whilst John Radford was, of course, already a football legend and a Wembley veteran, part of the Arsenal League and Cup double winning side of 1970-71 and winners of the Inter-City Fairs Cup the previous season. He went on to play for West Ham United and Blackburn Rovers before joining Stortford when he became a publican in the area.

Sutton United lined up for the Final as follows: 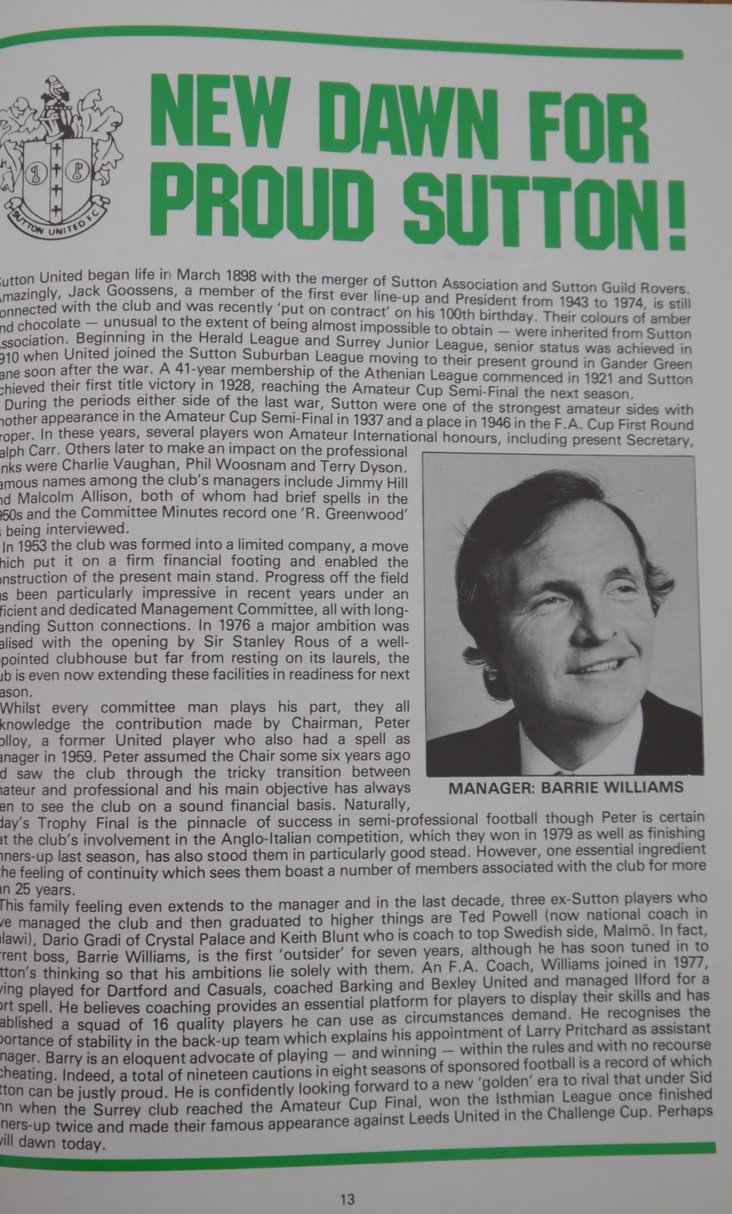 Larry Pritchard was something of a veteran- although that’s understating things somewhat, as he’d made more than 1100 appearances, 650+ for Sutton. He’d been part of the United side who had got to the Fourth Round of the FA Cup in 1970 and lost six-nil to Leeds United. Many of the other players had former professional experience, and having finished in fifth place in the Premier Division United were perhaps the slight favourites.

The match wasn’t really a classic. Eighty nine minutes went past without a goal, and then up popped Terry Sullivan to give Bishop’s Stortford victory in the very last minute. Twenty two thousand, five hundred and seventy eight turned out to watch. 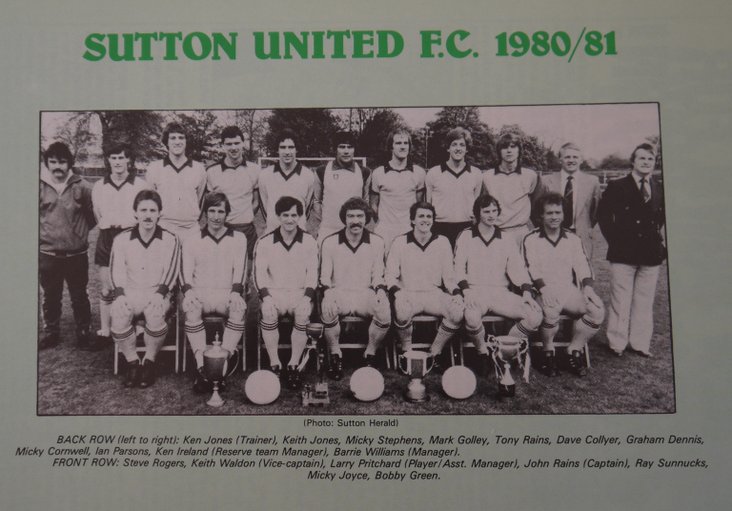 Check out our Isthmian Archive site, here- that's where we got the tables and much of the other information. 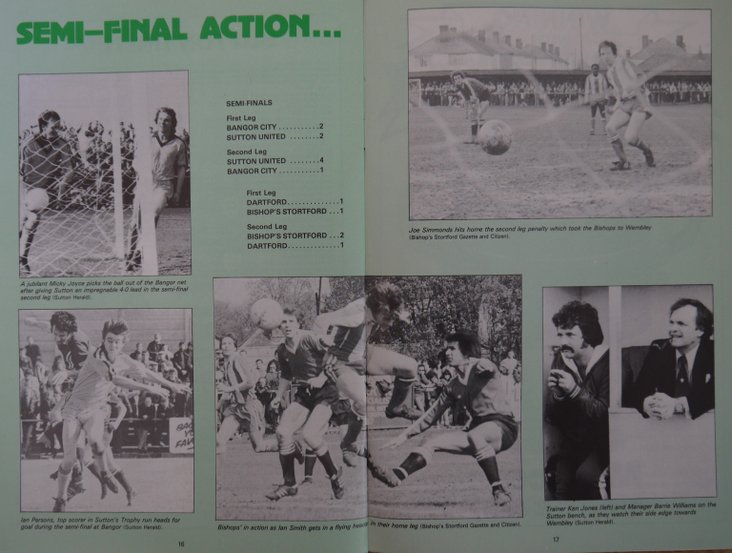  Chips keep Kember Chipstead confirm who will lead them next season