The Yachtsmen sail out of the cup, as the Magpies fly on 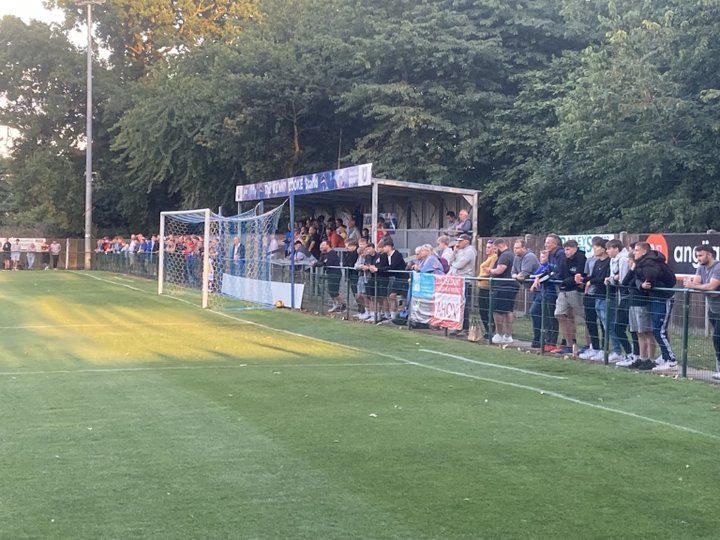 Wroxham welcomed Dereham Town in the first FA Cup match of the season. We got two fine goals, and an enthralling contest

Wroxham, the gateway to the Norfolk Broads, is as pretty as you might expect. Arriving in the town on this August Friday the river Bure, which runs through the centre, was crowded with little boats and swans in enormous numbers, and the riverside bustled with holidaymakers, as did the town centre. It was a congenial waterworld; pub beer gardens, riverside walkways and the water itself thronged with people relaxing in the sunshine.

That said, if you slept in the car the whole way here, you might have woken up and thought you were somewhere else. With Roys Department Store, Roys Petrol Station, Roys Food Hall, Roys Garden Centre, Roys DIY Centre and Roys Toy Shop, it would be easy to believe that you had arrived in Royston by mistake.

A short way down the road, Trafford Park was also bustling, as the fine folks of Wroxham FC- and their visitors from Dereham Town- prepared for the first competitive football match of the new season. The Emirates FA Cup had come to town, and these two sides, now at the same level in the pyramid after the Yachtsmen’s elevation to our ranks, would ordinarily be expected to be league rivals meeting for the first of many times this season. Despite being separated by little more than twenty miles, however, the Magpies are unlikely to be making any more trips in this direction, as they are now plying their trade in the Pitching In Northern Premier Midlands Division One, so have journeys to the rather more distant Corby and Halesowen to look forward to. 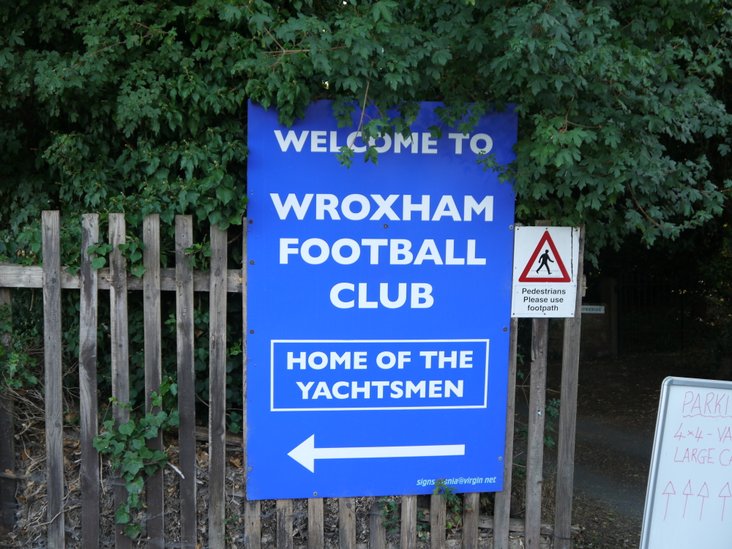 There was a positivity about Trafford Park- and that’s probably the only time you’ve read about any footballing Mecca named Trafford offering any positivity this summer. The Yachtsmen weren’t worried about a lack of new additions, nor about their star attraction leaving for a rival club- the squad strengthening over the summer has been carried out without any angst, with Ryan Hawkins, Robbie Linford, Josh Hazell, Josh Pond, James Wilson, Harry Barker and Jerry Dasaolou coming in, and star forward Ryan Miles, their very own Ronaldo, perhaps, after winning the Thurlow Nunn Golden Boot last season, staying on. The management team, led by promotion-winning boss Jordan Southgate, had also signed new deals to remain, and the side seemed in the best of spirits during the warm up.

It will be strange not to be writing about the Magpies this season, but the change of League has also led to a wide-ranging change of personnel for Dereham, which made them only partially recognisable this evening. Manager Adam Gusterson has departed- replaced by a former Wroxham boss, Tom Parke- and a number of players have also moved on, including Rossi Jarvis, Shaun Bammant, Toby Hilliard, Robbie Linford, David Hinton and Adam Hipperson. The club have described the last few months as “one of the toughest summers Dereham Town has encountered in its recent history,” and we were about to see whether Wroxham could take advantage of that upheaval. It was sad to see- the Magpies garnered large helpings of goodwill during their time with us- but we all hoped that they would quickly shake off the adversity and have a positive campaign.

We just didn’t want that to start tonight!

The Magpies, in green rather than their traditional black and white, got us underway right on time, as the home fans banged a drum and sang along.The hosts were in blue and white stripes, both goalkeepers also in green, Ollie Sutton’s apparel in the home goal a fairly similar shade to the visitors, worryingly. 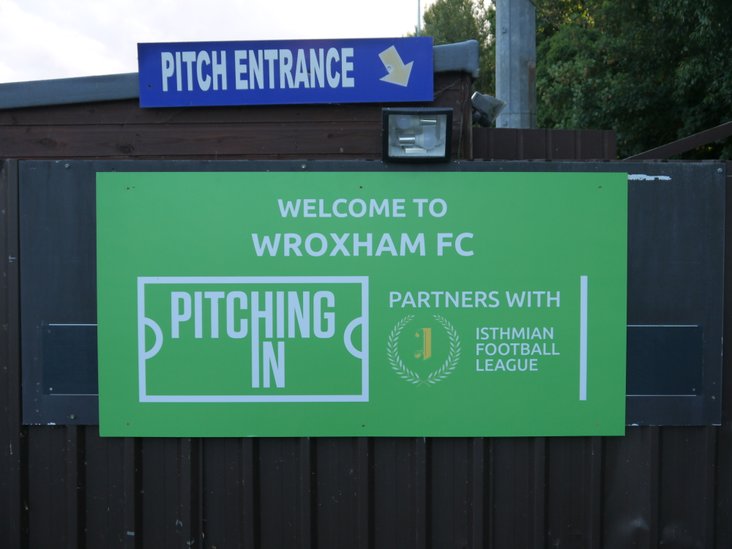 Dereham had the first chance, Luke Johnson’s shot deflected for a corner. It came to naught, but the visitors were very much on the offensive from the off and spent the first five minutes applying pressure, Carlos Rocha at the centre of much of their approach play.

Wroxham’s first attack of note came after seven minutes. Ryan Miles showed two Dereham defenders a clean pair of heels down the left, firing in a cross shot which Ross Bilham had to dive to his left to push away. It woke up the home fans again, behind the goal at the other end, but only for a moment. The visitors were on top, and came closest in the thirteenth minute, Valter Rocha swivelling just inside the home half and trying to chip the keeper, Sutton just getting back to claw the ball away.

Could the hosts respond? Couldn’t they just! Immediately they earned a free kick at the other end, twenty five yards out, and Ryan Hawkins almost burst the net. “We’re the famous Wroxham army and we’re going to Wembley.” It was a goal that certainly deserved a song, and it settled the hosts, who began to take control. A gaggle of geese flew over in an attempt to watch the game without paying, a four carriage trainload of freeloaders did the same from behind the clubhouse, and we reached the midway point of the first half with Wroxham camped in the visitors half. A man in a Borussia Monchengladbach shirt walked along the perimeter, perhaps lost.

Aaron Powell, the visitors left back, tried to get his side back into it. He twisted and turned in the home box, his attempt being stopped by a last ditch tackle. Ryan Swift fired a shot from twenty yards which was deflected narrowly over, and the Magpies began to make inroads. More pressure, and a shot from Carlos Rocha- who, along with his brother, was with Brightlingsea Regent and Basildon United last season- forced a scrambling save from Sutton. 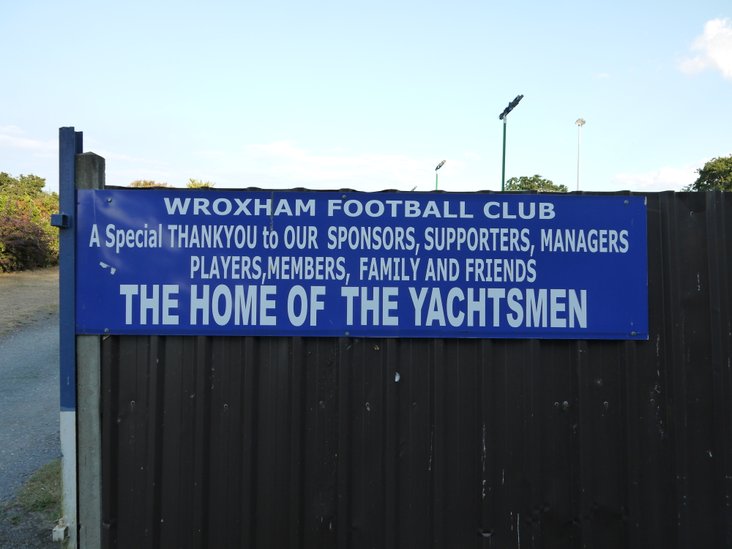 And then, Valter Rocha got the ball on the halfway line. He wasn’t going to try it again, was he? He was. The ball soared, Sutton stretched, and it was in the net! The celebrations were as stunned as they were joyous. Magnificent opportunism, but surely the hosts should have seen it coming? Two minutes later the same player forced a save from a free kick, and the pendulum had swung once more. Or had it? A misplaced pass at the other end, a shot, and Powell was clearing off the line to deny the hosts. Then Dereham were through again, Sutton out to deny Rocha (V). This was the kind of match you couldn’t afford to take your eyes off, and it reached the break all square.

The sides emerged for the second half to the strains of Seven Nation Army, and the hosts got us underway once more. Dereham, rather like the first half, applied the early pressure, but unlike the first half they made their control count. With fifty three minutes on the clock they went ahead, Henry Clark beating Sutton- who got behind it but couldn’t stop it- from just outside the box. Also unlike the first half they kept hold of the game, both Rocha brothers, particularly, in the ascendancy.

“Come on Wroxham,” sang the throng behind the goal, but it was half hearted, as was their side at this point. Another Magpies effort was tipped over by Sutton, the corner hacked clear, and the side in green remained in charge, forcing a double change for Wroxham. A third change followed almost immediately, Harley Black being helped off after being on the receiving end of a tackle- a fair tackle, the officials thought- and the hosts had twenty four minutes left to save the match. More fabulous interplay from the brothers who were making the hosts feel grim almost led to a third on sixty nine, but Rocha (C) shot just wide, and Wroxham needed some inspiration to match their perspiration.

Sadly for the hosts, all the action was at the other end. Another full stretch Sutton save stopped a Dereham third as we entered the last ten minutes, but whilst the gap remained just one, they still had hope. 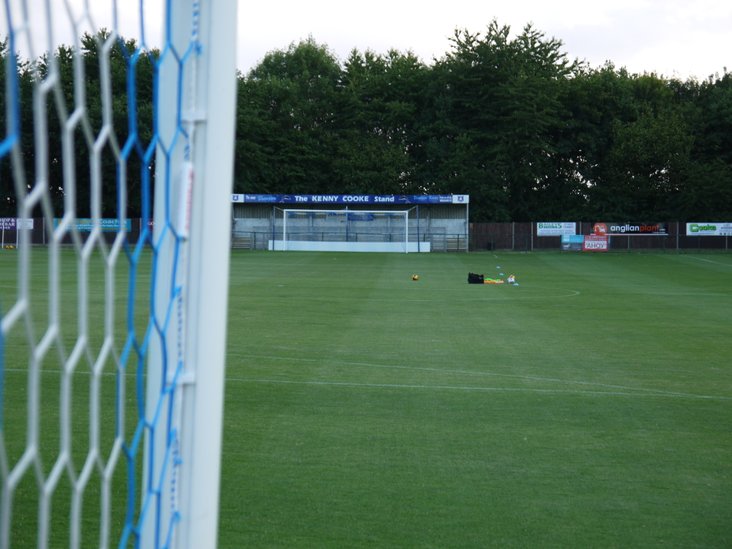 They finally applied some pressure, for the first time this half. A free kick on the left caused consternation, a corner resulted, the fans and the drummer awoke, and a goalmouth scramble came to…and end at the linesman’s flag.

We moved into five added minutes, with Wroxham number five Chris Skipper playing at centre forward- and showing some deft touches, too. Again, however, the goal could have come at the other end, a super crossfield ball on the break from one Rocha to another ending in a shot saved brilliantly by Sutton. We moved into the last few seconds, and it was still the visitors pressing- and that was that. The crowd was announced- an impressive five hundred and twenty- as the sides left the field.

The Yachtsmen sailed out of the FA Cup, and Dereham deserved to progress on the basis of their second half display. But in truth, whilst Wroxham would have liked a cup run, they’ve more important battles to come.

Good luck to the Magpies. On that display, despite the difficulties of the summer, they shouldn’t have much to worry about. 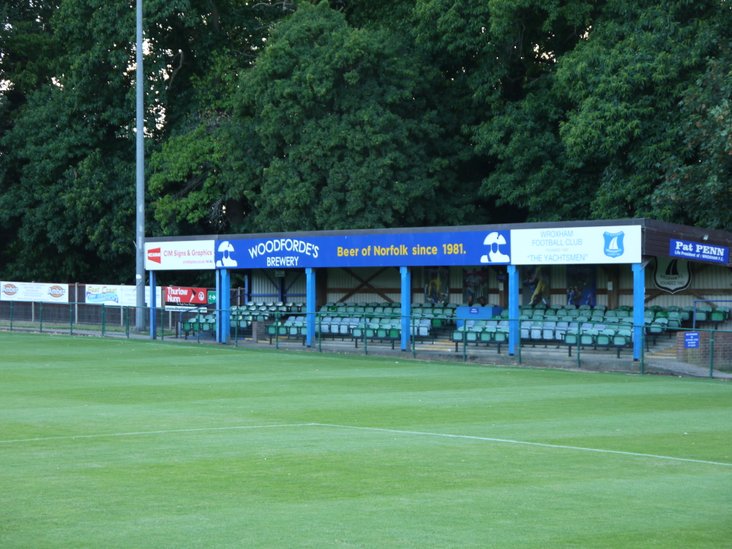 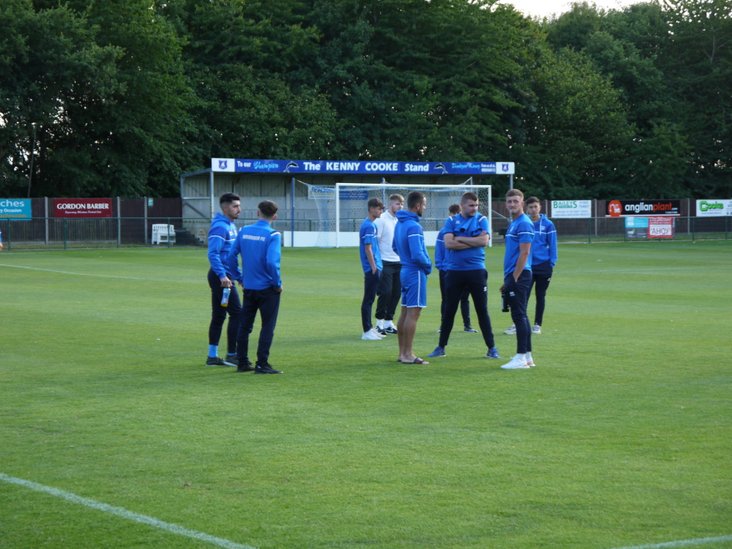 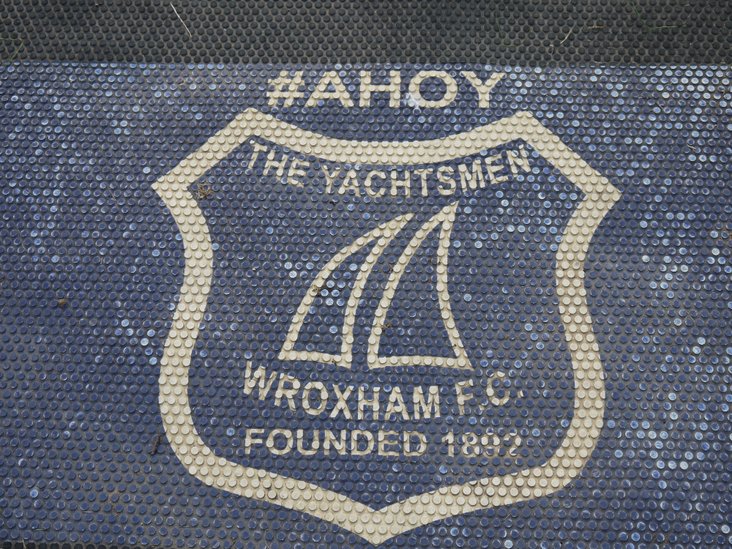 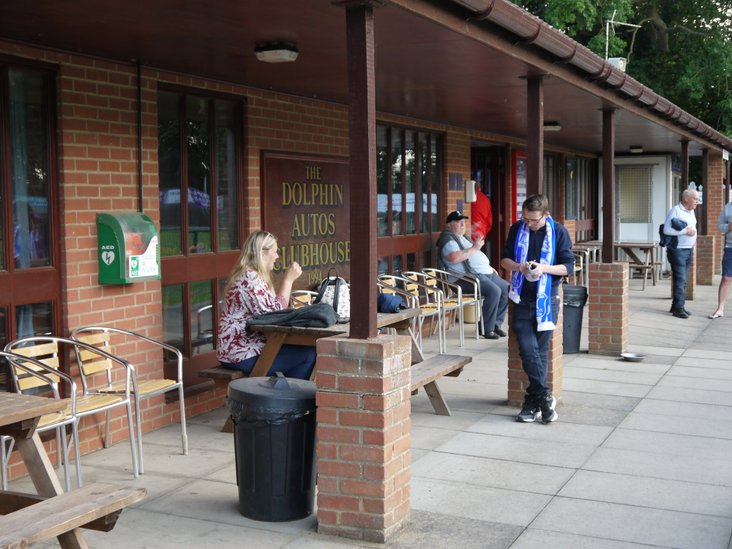  Saturday friendlies For some of our clubs the competitive season starts today, and for the rest, it's the last Saturday before the serious stuff starts. Here's a list of fixtures.