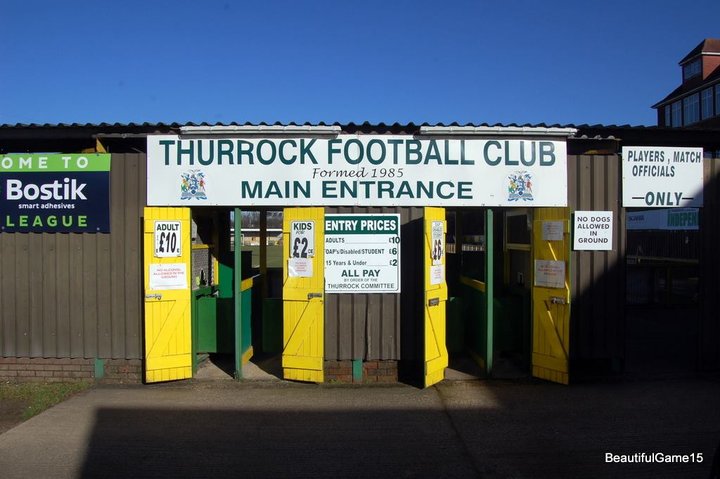 The Bostik League is sad to report that it has received a letter from Thurrock FC confirming that the club is resigning from the League at the end of the current season.

Thurrock joined the League in 1988 as Purfleet FC and were runners up in Division 2 North in their debut season. The Club was then relegated, but promoted as Champions in 1992 and promoted from Division 1 as runners up two years later. They continued to play in the Premier Division until the re-organisation in 2004, which saw promotion to the Football Conference.

It was in 2003 that the club changed its name to Thurrock FC to reflect the name of the area in which they were based, and they re-joined the League in 2012. The Club was promoted from the North Division as Play Off Winners in 2017 and have been respected members of the Division this season.

Secretary Norman Posner said in his letter of resignation, “as you will probably know our Chairman, Tommy South, is in remission from cancer and I am pleased to say that he is in very good health. Much of what goes on at the Club falls on Tommy’s shoulders and he now wants to be able to pursue other interests”.

League Chairman, Nick Robinson, commented; “It is a very sad day for us to have a resignation in these circumstances. The Club have been fine members of the League for some 22 seasons in total. We have many happy memories of the Club and particular their exploits in The FA Cup. I hope it is not the last we will see of Tommy and his colleagues”.

 The Bostik League Show- Episode 42- Easter special! We did actually manage some football over the Easter weekend- and the Back of the Net team caught much of it...

An Easter Monday Round up!  Will this rain ever stop? Here's a round up of yesterday's action! It wasn't all played at Aveley, honestly...