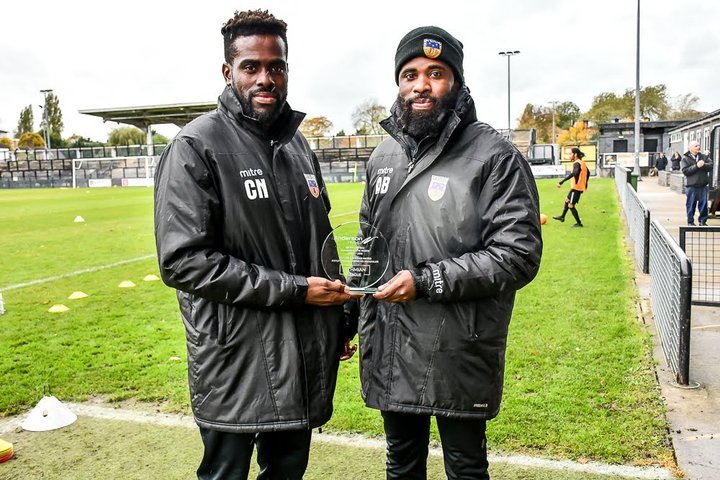 Ashley and Cornelius honoured for their work with the Terrors

The Football Black List was founded in 2008 by sports journalists Leon Mann and Rodney Hinds and is designed to highlight positive influencers from the Black community in the sport, and importantly also helps to shine a light on deserving people working in the community and at the grassroots level of the game who often go uncelebrated.

A panel of experts from the Black community and football industry vote independently on nominations made by the public to determine who makes the list, with representation from the Premier League, The Football Association, Professional Footballers’ Association, League Managers Association, English Football League, PGMOL, FARE, BCOMS and Kick It Out.

The Voice Newspaper is the exclusive home of the Football Black List which creates an opportunity to celebrate the Black communities contribution to the industry, while also encouraging debate and discussion on how best to address the ongoing under-representation of people from African-Caribbean backgrounds away from playing.

On discovering their nomination Ashley Bosah said ‘It is great to be named on this prestigious list and have the grassroots level of game highlighted. I hope that it can inspire some of the young players we coach to consider the wide variety of roles in football beyond just playing.’

Cornelius Nwadialor added ‘It is amazing to be recognised in this way amongst so many great names and shows that people recognise the difference we are trying to make at the club and within our community by helping players achieve their goals, be it in the professional game of football or just generally progressing within their personal lives.'

Words and picture courtesy of Tooting & Mitcham Utd- and by the way, that's an Isthmian League Manager of the Month trophy they are holding!

Covid Update 26 November 2020  Following a board meeting last night, the Pitching In Isthmian League has sent a short update to all clubs