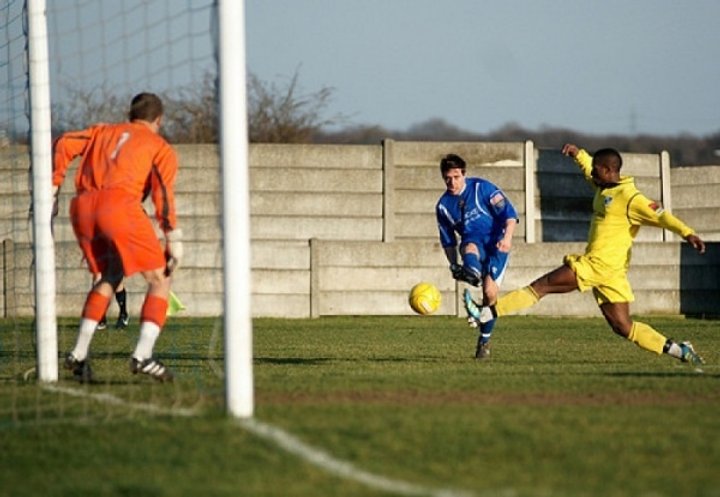 FAST-STARTING Billericay maintained their five-point lead in the Ryman Premier with a 3-1 home win over play-off contenders Cray yesterday (Saturday).

Courtney White headed them into a 13th-minute lead and struck again ten minutes later. Chris Wild then made it 3-0 after only 27 minutes.

Chris Saunders pulled one back in the 35th minute and Cray had the upper hand for the rest of the game without being able to further reduce the arrears.

Second-placed Hornchurch, who have two games in hand, maintained their challenge with a 2-0 victory at in-form Kingstonian, their 12th away win of the season.

Martin Tuohy drilled home the opener from Leon McKenzie’s pass in the seventh minute and added the second with a stunning volley just after the hour. That took him to 19 league goals, level with Wealdstone’s Richard Jolly and now three behind former Margate striker Kwesi Appiah, still the division’s top scorer.

Lowestoft were beaten 1-0 at Hendon and can no longer catch the top two by winning their games in hand. A tight game was settled in the 82nd minute when visiting defender Sam Gaughran headed the ball past keeper Andy Reynolds and Isaiah Rankin accepted the gift with glee.

Hendon moved into fourth place, above Cray who themselves are now just one point above Bury, who have a game in hand, after the Alan Boon Cup finalists won 3-2 at Margate.

Lee Smith’s header gave Bury a seventh-minute lead which was wiped out by Craig Cloke’s penalty on the half-hour. Then came a quick exchange of goals shortly before the interval, with John Sands restoring Bury’s advantage only for Richard Avery to reply. Sands struck again on 64 minutes and this time there was no response from the home side.

It was a bad day for the four clubs in the relegation places. Hastings, just above the drop zone, had the day off and must have feared that the sides above them would close the gap. But although all four had moments of hope, they ended up pointless.

Leatherhead were the only side who could have overtaken Hastings and they were given an early lift when Billy Manners gave them a seventh-minute lead at Concord.

The Essex club, chasing a sixth successive league win, dominated the rest of the game but when Tony Stokes missed a 65th-minute penalty it began to look as if it would not be their day. Shortly afterwards, however, substitute Sherwin Stanley equalised with his first touch and he went on to set up an 83rd-minute winner for Stokes.

Tooting stayed on level terms with visitors Canvey for an hour but then John Easterford scrambled in the only goal of the game to give the islanders the points.

Aveley, with a much-changed team under new manager Justin Gardner, were a little unlucky to go down 2-1 at home to Wingate.

One of the newcomers, Ajibola Olatunbosun, headed into his own net to give Wingate the lead six minutes before half-time.

Two more new signings, Michael Begg and Billy Holland, hit the woodwork either side of half-time but Holland’s effort led to the equaliser as Danny Francis slotted home the rebound (Holland's shot is pictured above by Mikey Cartwright). Wingate, though, claimed the points with a lob from Leon Smith with 12 minutes left.

Bottom club Horsham took the lead at Met Police with a goal on the half-hour by Daniel Morris. But it was soon to be business as usual for the Hornets, who have only 11 points so far and banked six of them from their first two away games of the season.

They were ahead for only seven minutes before Staforde Palmer’s header made it 1-1, and Ryan James put the Met ahead immediately after the interval. Late long-range strikes by Jack Macleod and Chris Bourne wrapped up a 4-1 victory as Horsham’s winless run reached 27 matches.

Lewes and East Thurrock met in Sussex four days after East Thurrock won their Alan Boon Cup semi-final clash and this time the honours were shared in a 2-2 draw. Lewes will be more satisfied with the outcome, having played with ten men from the 13th minute when Jack Walder received his second yellow card.

By then Lewes were ahead thanks to an early goal by Paul Booth. The visitors had to wait until the 53rd minute for Greg Cohen’s leveller and went ahead through Matt Hall, a university student at nearby Eastbourne, in the 71st minute. New Lewes signing Billy Medlock came off the bench to save a point with seven minutes left.

A goal in each half by Laurent Hamici gave Carshalton a 2-1 win at Harrow, who remain dangerously close to the relegation zone. Rob Wolleaston put the hosts ahead in the 17th minute but Hamici headed the equaliser in the 39th minute and grabbed the winner with 20 minutes left.
Web: http://ponderosapics.photoshelter.com