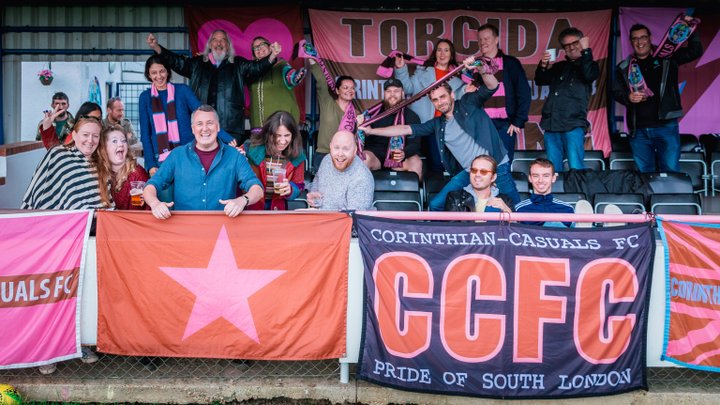 Folkestone and Casuals face the big boys once more, whilst a number of Saturday’s cup heroes get back to the day job in the Pitching In isthmian League. Here’s our preview.

Folkestone Invicta and Corinthian-Casuals found themselves a hairsbreadth from glory on Saturday, as both conceded late equalisers to National League opposition. Invicta were three goals up before a fightback from National League Eastleigh, and the BuildKent Stadium will be rocking tonight as they try to go one better. We suspect the noise levels will be so loud that there will be people complaining in Calais! Invicta are still unbeaten this season, and we hope very much the same will be said at half past ten this evening.

Corinthian-Casuals will be off around the M25 to Clarence Park, where they will face St Albans City for the second time hoping for the victory which will allow them to host League Two leaders Forest Green Rovers at the start of next month. Surely that will be picked for the TV? Casuals have actually been better away from home than at King George’s Field this season, so we hope that nobody is writing them off!

We have three matches in the Premier Division tonight, and two involve our cup heroes from Saturday.

Horsham have been quite magnificent in the cup, defeating Woking from the National League and Eastbourne Borough from National League South- as well as then Premier Division leaders Kingstonian- on the way to the First Round. The Hornets have only one league win, however, and sit second bottom, so it’s time for them to take their mind off the cup for a moment and kick-start their league form. They won’t have it easy tonight, as Cheshunt come to call- the Ambers having defeated Hornchurch and drawn with Kingstonian during the last week and a half, and currently sitting comfortably in mid table with their eyes focused higher.

The Ambers won at the Camping World Community Stadium in September last year, whilst the Hornets won the two prior fixtures in 2019-20.

Bowers and Pitsea, who magnificently dumped out National League Aldershot Town, have now only lost one game in ten across all competitions- that defeat coming against leaders Kingstonian. They travel to another side who made headlines on Saturday, Merstham sending Haringey Borough back to North London on the receiving end of a five-goal thrashing. That’s two wins from three for the Moatsiders, two clean sheets from three, and nine goals scored.

The last time Rob Small’s side arrived at the Whisky Bible Stadium, back in January 2020, they left with a three-one victory; indeed they took four points from six that season.

East Thurrock United look to get back to winning ways as they host Bishop’s Stortford. The Rocks followed their last-gasp comeback victory over Hornchurch earlier this month with heavy defeats against Potters Bar Town and Carshalton Athletic, whilst the Blues got back to winning ways as they defeated Margate at the weekend and will go level on points with sixth place Folkestone Invicta with victory.

Another of our cup heroes from the weekend, AFC Sudbury, are at home once more as they host Great Wakering Rovers. The visitors picked up their first league win of the season on Saturday, whilst the Yellows have only one defeat in thirteen matches this season and will climb to fourth with victory. Actually, they could mathematically climb to third, but given that Grays Athletic’s goal difference is +8 better, it would need to be some victory! A win for Rovers would also have to be rather substantial to lift them away from the second-bottom position they currently occupy.

Barking start the day in ninth, but again victory could take them as high as fourth- fifth if Sudbury also triumph. The Blues host Witham Town, as two sides who have gone rather off the boil of late look to get back to winning ways. Barking don’t have a league win since September 10th, and have taken only one point from their last twelve; whilst Town have slipped from the top five to thirteenth after a run which has seen them without a league win since August Bank Holiday Monday. That’s a record of only one point from their last fifteen.

Marlow, still unbeaten in the league, will go top of the table with just a point against Hanwell Town- although they’d obviously be happier with three! The hosts, who have so far won every match (six) they’ve played at the Alfred David Memorial Ground, scoring twelve goals and conceding none, will perhaps face their biggest test, as the Geordies are in top form. Currently in fifth place, their last four matches have brought them four victories and seen them score eighteen goals!

A win for Hanwell will take them level with Binfield on sixteen points, three points behind the leading trio.

Basingstoke Town sit in sixth place, six points off the top with either two or three games in hand over everyone above them. The first of those catch up fixtures sees them travel to Northwood. The Woods have lost their last four league matches and conceded eighteen goals in doing so, whilst Town have only played one league match in five weeks, defeating Chipstead on October 2nd. In Conor Lynch they have one of the most in-form strikers in the league, with eleven goals in ten games so far this season.

Another side with games in hand over the sides above them are eighth place Chertsey Town, who get back to League action following their efforts in the Cup against Southend United at the weekend. The Curfews are unbeaten in their five matches, but have drawn three of them. They travel to Ashford Town this evening having ben without a league match due to cup and trophy commitments since their six-one win over Chalfont St Peter on September 14th.

The Tangerines have lost their last three matches, two in the league and one in the FA Trophy, but given those two league defeats came against the top two we probably shouldn’t read too much into that! They have won only one of their last six in all competitions, however, so will want to bounce back from that.

Finally, South Park entertain Tooting & Mitcham United. Sparks moved up to tenth place with a six-nil thrashing of Sutton Common Rovers last Tuesday night, and have two wins from three; whilst the Terrors are two places below them after not yet managing to find consistency this season. Two wins and a draw from three matches against Sutton Common Rovers, Chipstead and Northwood made them look upwardly mobile, but a walloping in the trophy against Whitehawk and defeat to Bracknell Town at the weekend have stunted that progress. A win for either will see them climb to at least ninth place.

Haywards Heath Town will look to reclaim their place at the top of the table as they take on Chichester City at Hanbury Park. Heath lost for the first time as they hosted Herne Bay at the weekend, and although they are just a point behind new leaders Cray Valley PM they’ll need victory to leapfrog them, as the Millers have the same goal difference but have scored more goals. City have gone three League matches without a win- although lost only one of them- and a win will take them eighth.

A win for Sittingbourne over Whitstable Town could take them into the top five. The Oysterboys picked up their first win of the season at the weekend in defeating Phoenix Sports- who incidentally were the last side defeated by the Brickies, on September 25th.Three league matches at Woodstock Park this season have seen three victories, so there should be no shortage of confidence in Blakey’s Garden Shed.

Hastings United’s cup exploits see them start the day in tenth place, ten points off the top- although they have four games in hand over the leaders and, prior to Saturday’s cup defeat against National League Maidenhead United, had won eight matches in a row in all competitions. They head to Reachfields tonight to face Hythe Town, the Cannons, behind them only on goal difference, also in god form- with two wins and a draw from their last three league matches.

Finally, we have a Sussex derby. Whitehawk, who won their first League match since the end of August when defeating East Grinstead Town on Saturday, host Burgess Hill Town, who were at the same time winning their first league match of the season! Those statistics don’t tell the full story of the season so far, however, as both have recorded some fine victories in Cup and Trophy. A win for the Hillians will take them above the Hawks on goal difference.

 Nearly but not quite for Invicta and Casuals- whilst the Moatsiders run riot (again), Geordies end Marlow’s run, and Heath go back to the top It’s our round up of Tuesday night’s action