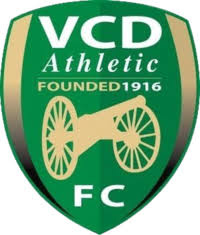 Every day, in every way, the VCD squad is getting bigger and bigger...

It's time for our daily visit to VCD Athletic, where yesterday, around ten minutes after we published an article welcoming one player to the club, they went and announced two more! It's almost as if they are doing it deliberately!

Forward Marcus was with Haywards Heath Town last season, although rather briefly as he played a grand total of one match- and with Brentwood Town, playing four times and scoring once.

He came to prominence at East Grinstead Town during the 2017-18 season, scoring twelve goals in twenty eight matches and winning the Player of the Season Award. That record got him a move to Lewes, where he added two more- but he never really managed to establish himself at the Dripping Pan and ended 2018-19 back at East Court on loan.

Prior to moving to Heath he spent some time with Whitstable Town, and previously played for Aveley and Chipstead.

Kiki Oshilaja is a defender who came through the ranks at Dulwich Hamlet, and went on to play for Carshalton Athletic, Thamesmead Town and Sheppey United before signing for Welling Town last summer. Read more here.

 The return of spectators! FA issues new guidance which will see fans back to football from this week

Fifteen Hawks!  Harlow get into a signing frenzy