Urchin Charlie hopes to give King's Lynn a Ruff time! 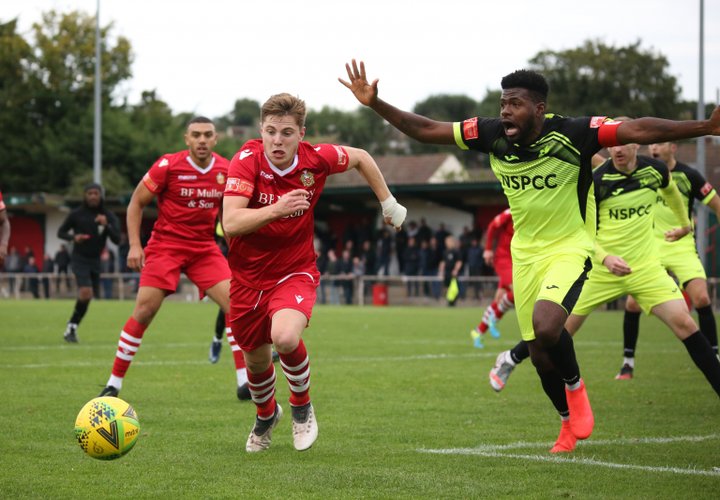 Hornchurch host King's Lynn in the Trophy tomorrow, and midfielder Charlie Ruff has his sights set on another giant killing

CUP ROMANTIC Charlie Ruff admits Hornchurch have restored his love of football – and he wants to repay them by inspiring another FA Trophy shock on Saturday.

Ruff joined The Urchins from Potters Bar Town in October and has since scored three times in his side’s run to the fourth round, including the late winner as Mark Stimson’s men shocked Dulwich Hamlet in December.

Hornchurch will have to raise their game again this weekend as they host King’s Lynn Town, who play in the National League – two tiers above Ruff and his teammates, whose Pitching In Isthmian League campaign is currently on hold. But while the higher-placed hosts have been continuing their league campaign in recent weeks, Ruff believes the quality in the Hornchurch ranks can more than make up for the difference in match sharpness.

“The build-up hasn’t been what we wanted it to be – we haven’t played a game since Dulwich and only returned to training last week,” he said. “But we know we have a really good side here. We believe we are good enough to play in the league above, as we’ve shown by beating two National League South sides to get this far.

“I’ve really enjoyed it at Hornchurch and it has been a saving grace for my football. I really fell out of love with it in the first lockdown, when the season was cancelled.

"Joining Hornchurch has made me play with freedom and I’m enjoying my football again. The gaffer has put so much faith in me. He knows I’ll give the ball away and make mistakes but he trusts me and allows me to play my game.”

That faith has been justified by the former Hertford Town midfielder’s goalscoring exploits in the FA Trophy run to date and the side go into this weekend knowing defeat could make this their last match of the season.

“It’s nerve-wracking as you’re not at your full potential, so it’s out of our hands a little bit,” said Ruff, whose side are one of 228 Trident League clubs supported by Pitching In, a multi-million-pound grassroots sport investment programme established by Ladbrokes with the support of owner Entain.
In addition to financial support, the initiative focuses on volunteering and community – with Ruff acutely aware of how the loss of football from the weekly routine can affect fans and players.

“You have to keep it in perspective – I’m just missing football, but other people are losing family members,” he said.

“But I’d be lying if I said it was easy. Football is all I’ve ever known, really – my brother plays and my dad has always taken me to games – so I do miss it.

“That’s why this Trophy run has been nice – and we want to keep it going.

“It will be a tough game but it’s 11 against 11 and we are confident we can cause an upset. If we can score an early goal, we can disrupt them and take it from there.”

Ladbrokes, with the support of its owner Entain, has launched a multi-million pound investment programme, Pitching In, designed to support and promote grassroots sports. The programme includes a flagship partnership with The Isthmian, Northern Premier and Southern Leagues - collectively known as The Trident League, as well as a partnership with the UK sports charity SportsAid. For more details see: https://entaingroup.com/sustainability/pitching-in/

An Annual Event- The Official FA Yearbook, 1950-51  We go back to look at the 1949-50 season, when Leytonstone won the Isthmian League, Tooting were Athenian League champions, and Cheshunt won the London League.