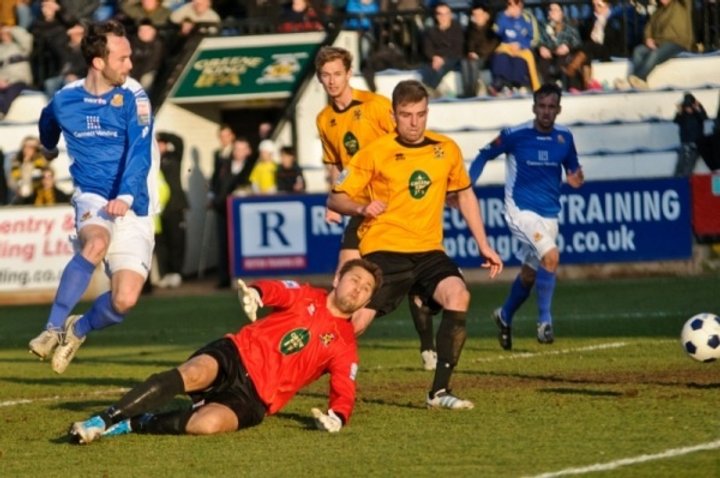 Now they must travel to Wales in the quest for a place at Wembley. Stones have been drawn against Newport County in the semi-finals. The first leg is at Newport on March 10 with the return at Grosvenor Vale the following Saturday. Luton meet York in the other semi-final.

The last Ryman League club to reach the last four were Canvey in 2004, when they went on to be losing finalists. That was the last season before the Conference expanded to three divisions and since then Boreham Wood, as a Southern League team in 2006, had been the only non-Conference team to survive the quarter-finals.

Stones, of course, have history in the FA Trophy, having won it in 1985 when they also lifted the Conference (then known as the Gola League) title, becoming the first team to perform that double. A few years later they lost their ground and had to rebuild their on-field fortunes after joining the old Isthmian Division Three in 1995.

Jolly’s double on Saturday took his total in the competition to a round dozen and his overall tally for the season to 34. He stunned the home side by handing Wealdstone the lead with just four minutes on the clock, firing home from close range when Lee Chappell headed down a cross from Kurtney Brooks.

Cambridge stormed back and Stones did well to hang on to their lead until half-time. The home side’s best chance fell to Liam Hughes, whose volley was tipped over the bar by keeper Jonathan North.

After the interval North again foiled Hughes and Luke Berry missed a clear chance to equalise. It seemed that the pressure would have to pay off but instead, in the 69th minute, Wealdstone who doubled their lead.

Brooks crossed to the near post and Jolly, as ever, was in the right place to turn to the ball into the net (pictured above courtesy of Steve Foster/Wealdstone FC), to the delight and disbelief of the 376 visiting fans in the crowd of 2,034.

Cambridge responded almost at once. Sean Cronin conceded a free-kick just outside the box and James Jennings found the corner of the net with his free-kick.

Somehow Stones survived another 20 minutes of non-stop Cambridge attacks. Jennings thought he had saved the tie in the 90th minute with another free-kick but this time North tipped the ball over the bar.

The visitors had to suffer through four agonising minutes of added time but, despite forcing two corners, Cambridge were unable to trouble North again and Stones were able to celebrate in style.
Web: http://picasaweb.google.com/wealdstonefc