Wheeler picking up the peices 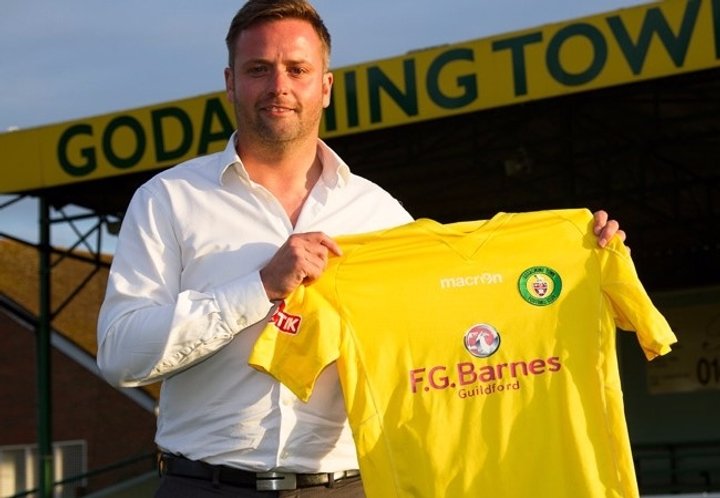 Darren Wheeler has been handed temporary control of Godalming Town as the Ryman newboys recover from the 10-0 hammering at Carshalton Athletic on Monday night that led to the departure of manager Andy Hunt.

Pictured following his appointment at Weycourt in June 2013, the 37-year-old has told fans he was "deeply disappointed" to be leaving Weycourt but felt a change at the top was needed with the G's rooted to the bottom of the Ryman South table with a single point.

In a statement on the club's forum he said: "I’m deeply disappointed with how this season has gone. It has been no lack of effort from the players or my coaching staff but this league and that games at the start have proved too much so far.

"I hope some fresh blood into the club will turn the club around and keep the club at step 4. This a a lovely club and I hope things turn around."

The experienced Wheeler, who also manages the club's ladies side, is expected to be at the helm for the club's next two fixtures, starting with Cray Wanderers on Saturday.

Now in his fourth spell at the G's after returning two years ago before their switch to the Ryman League this summer, the 32-year-old has also turned out for Bognor Regis Town, Slough Town, Basingstoke Town, Fleet Town, Farnborough, Mangotsfield United, Eastleigh, Weymouth and Hartley Wintney.

The G's thanked Hunt and wished him well in a statement naming Wheeler as caretaker and launching the hunt for a new manager.

The club said: "We would like to take this opportunity to thank Andy and his team for their effort and commitment over the last three and a half seasons. With immediate effect Darren Wheeler will take on the role of interim player manager until a new full time manger can be appointed.

Potential candidates for the vacant post at the G's should send their CVs with a covering letter to Godalming Town chairman Kevin Young at: kevin@beelinecars.com

 Snapper starts swimming challenge Tooting & Mitcham United are getting behind the bid of the Ryman South club's snapper Sam Conquest to swim the length of the English Channel for charity.