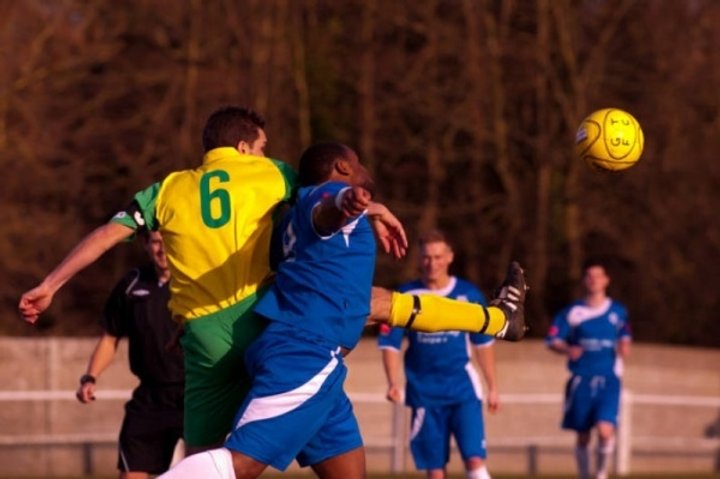 YOU have to feel sorry for Whyteleafe, who must have thought they had revived their Ryman South survival hopes with a 3-0 home win over Corinthian-Casuals yesterday (Saturday): their first league victory since September 10.

Then they found that the two sides above them, Burgess Hill and Whitstable, had both scored last-minute winners, and Leafe remain a daunting nine points adrift.

Fred Fleming’s fifth-minute goal gave Leafe, and new manager Steve Griffin, an excellent start. Their prospects improved when Casuals had Jamie Byatt sent off. Elliot Mitchell made it 2-0 in the 58th minute and Reggie Savage wrapped it up with ten minutes left.

So far so good, but then came the news from elsewhere, in particular the major shock at fifth-placed Worthing, who lost their unbeaten home record when Stuart Vahid converted a Dale Skelton corner to give Whitstable a 2-1 victory.

Skelton had put them ahead after six minutes and Worthing struggled to get back on terms. Ryan McBride had a penalty saved by Dave King on the hour but Rebels were awarded another spot-kick ten minutes later and this time Paul Kennett made no mistake. Then Vahid had the last word.

Dan Clarke’s ninth-minute header gave Burgess Hill an early lead but visiting Merstham equalised on the stroke of half-time through Liam Wright, who then put them ahead with 20 minutes left. Kenny Pogue levelled it again five minutes later and Pat Harding grabbed the last-ditch winner.

At the top of the table, Bognor – now the only side in the league unbeaten at home – maintained their six-point advantage with a 4-2 win at Godalming which featured three penalties in quick succession.

Darren Wheeler gave G’s the lead from the spot in the 38th minute only for Ashley Robinson (pictured above by Tommy McMillan, losing an aerial challenge to Ben Edwards) to respond with penalties in the last minute of the first half and the first minute of the second.

After that the action was more conventional. Steve Harper headed Bognor’s third on 55 minutes and also netted a late clincher after Warren Harris put G’s back in the game with 20 minutes left.

Whitehawk remained in second place with an untidy 3-1 home win over Walton & Hersham. Sam Gargan volleyed Hawks ahead on 27 minutes only for Graeme Purdy to make it 1-1 right on half-time. Lee Newman restored Hawks’ lead on 72 minutes and Josh Jones made sure ten minutes later.

Dulwich remain level on points with Whitehawk after an Ishmael Kamara double earned them a 2-0 victory at Walton Casuals. He headed the opener on 24 minutes and got his second from a corner with 20 minutes left.

The top three have pulled clear of the other three main play-off contenders, who were all beaten.

Maidstone stay fourth despite letting the lead slip in a 3-1 home defeat by Faversham. Alex Flisher broke the deadlock on 52 minutes but goals by Danny Hockton and Nicky Humphrey within 11 minutes and James Peacock added another in the 74th minute.

Worthing remain fifth despite their defeat because Folkestone also went down at home, 3-2 against Ramsgate who moved into seventh place, though they are still nine points behind their victims.

Bradley Dack put Ramsgate ahead after 16 minutes and, after James Everitt equalised at the end of the first half, Joe Taylor put Rams in front immediately after the restart.

Stuart King made it 2-2 in the 52nd minute with his 19th league goal of the season and he is the leading contender for the division’s Golden Boot, though he needs another six to match the departed Jason Prior’s total for Bognor.

Folkestone looked set for the draw they needed to move back into the top five but then came another of the division’s late winners when Tom Chapman struck during ten minutes of time added for an injury to referee Ollie Jackson.

The scoreline was the same at Chipstead, where Matt Geard’s double gave Eastbourne the points. Sam Crabb put the visitors ahead after 15 minutes and Geard added another two minutes before the break.

Chipstead dominated the second half and eventually pulled one back in the 80th minute through Matt York. But Geard restored the two-goal margin before Bruce Hogg got a second for Chips in the last minute.

Jamie Cade fired his second hat-trick in Crawley Down’s last three home games as the Anvils romped to a 5-1 home win over Sittingbourne.

The visitors had not played since January 24 and the rust showed as Tom Burton and Cade struck in the first 18 minutes. Anthony Hogg quickly pulled one back, only for Luke Blewden to make it 3-1 in the 25th minute. Cade nabbed his second on 57 minutes and completed his treble with six minutes left.