Worthing extend their lead to ten points, and cast off any thoughts of a curse 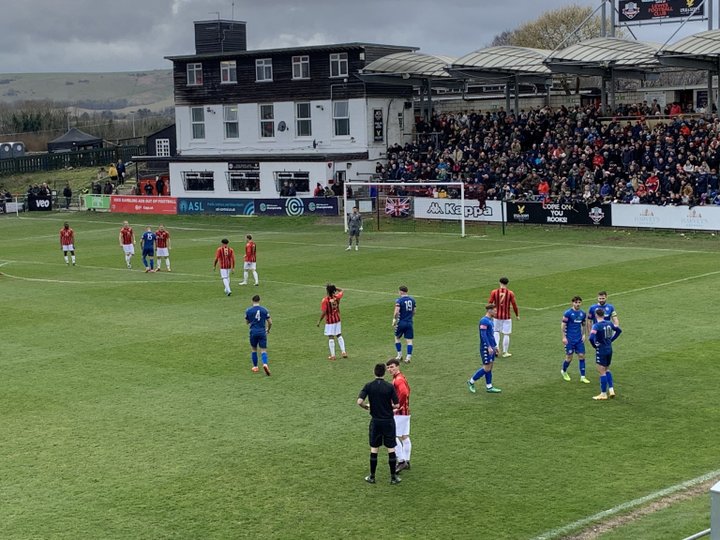 Invicta, Enfield, Margate, the Robins, Bowers and Merstham also picked up three points. It’s our Pitching In Isthmian Premier Round up.

Leaders Worthing, with boss Adam Hinshelwood celebrating his latest Manager of the Month Award, had a tricky trip as they looked to maintain or perhaps increase their advantage at the top. The Mackerel Men, having won their last four matches without conceding a goal, were on the road to face sixth place Lewes, and both sides emerged to the applause of a crowd of two thousand, three hundred and forty seven- the biggest at the Dripping Pan for seventy years. The visitors took the lead just after the half hour through Callum Kealey, but an own goal six minutes later saw the Rooks draw level. With thirteen minutes left the visitors were ahead once more, Jesse Starkey the scorer. Manager of the Month curse? Not for the Mackerel Men, who extend their lead to ten points.

Second place Bishop Stortford, eight points behind at start of play, welcomed a Sussex side from further up the A24, Horsham. Stortford, unbeaten in nine and with five clean sheets from their last six, needed victory, whilst Horsham, who had drawn five of their last ten, hoped to start turning one point into three. Stortford got another clean sheet, and Horsham got another draw, as the match didn’t manage a goal. The Blues stay second.

Folkestone Invicta, who started the day two points behind Stortford, were on the road to Kingstonian, their hosts having gone completely off the boil of late, coming into this one on the back of four defeats in a row and after seven matches without a win. The match remained goalless for seventy minutes then saw two in the next five, both for Invicta. David Smith gave them the lead, Adam Yusuff doubled it, and although Ollie Cook got one back for the K’s there was to be no late equaliser. Invicta are now level on points with second place Stortford, with a game in hand.

Hornchurch v Corinthian-Casuals was postponed, which gave Enfield Town the chance to climb above the Urchins if they could avoid defeat against second bottom East Thurrock United. They could do more than that, without much trouble, as Sam Youngs put them ahead on five minutes, Mo Faal doubled the lead just after the half hour and Lyle Della-Verde made it three with twenty two minutes left. That was that, and the Towners are fourth.

Margate started the day in seventh place, albeit ten points off the top five, and have perhaps left their Play Off charge a bit late, but were coming into their match at Brightlingsea Regent with the AB1 Golden Gloves award for February in the back of their net, along with five consecutive clean sheets. Third from bottom Regent needed to breach that blue rearguard today, and they did after twelve minutes, Luke Skinner opening the scoring, but the Blues hit back, Benas Vaivada and Crossley Lema giving them the advantage, the second coming four minutes after the break. That was that, and Margate remain seventh, Regent are twentieth.

Carshalton Athletic welcomed Haringey Borough to Colston Avenue, neither in the best of form- the Robins with only one win in six, Borough with two wins from the same period. Dan Bennett opened the scoring for the Robins after twenty seven minutes, and right at the end the hosts made the outcome clear, Dan Roberts and Danny Bassett making it a rather Danny sort of day for Athletic. Three-nil was how it ended.

Cheshunt, three unbeaten, were on the road to Cray Wanderers, who had also looked much improved of late with only one defeat from five. The visiting Ambers went down to ten men three minutes before the break, Chevron McLean seeing red, and the penalty was converted by Anthony Cook to give the hosts the lead. The ten men drew level eighteen minutes from time through Rowan Liburd, and the two sides had to settle for a point.

Potters Bar Town, unbeaten in four and looking a different side since Sammy Moore took over, welcomed Wingate and Finchley. Neither side managed a goal.

Bognor Regis Town have struggled to find any consistency this season, and you could say the same about visitors Bowers & Pitsea. Eleven points and six places separated the two at start of play, and it was eight and six at the end, as the visitors triumphed. The first action of the match was two red cards, one per side, with Bognor’s Harvey Hughes lasting only three minutes and Bowers Ben Steward departing a quarter of an hour later. The visitors then went ahead, Lewis Manor’s seventeenth of the season, and doubled their advantage eight minutes after the break, Michael Ademiluyi with the second. That was that, the points going back to Essex.

Merstham welcomed Leatherhead in a Surrey derby. The Tanners have been much more difficult to beat of late, with only two defeats from their last seven, but with a nine point gap between themselves and safety- and eleven between them and their hosts- needed to begin turning draws into victories if they were to have any chance of staying up. Sadly for the travelling Green Army they didn’t manage that, because despite Jermaine McGlashan giving them the lead after a quarter of an hour the Moatsiders equalised ten minutes before the break, Finlay Lovatt on his debut, and then five minutes from time Bromley loanee Lovatt got another- the winner.

 Bracknell end Northwood’s away day run, whilst Sports and Thatcham each hit six Chertsey got four, Chipstead three, and Binfield shocked the Geordies. It’s our Pitching In Isthmian South Central round up.