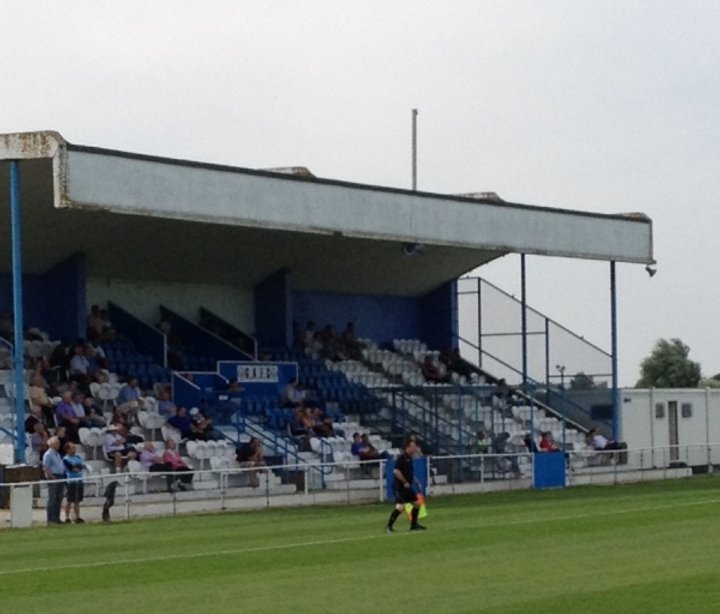 HISTORY will be made at Potters Bar Town on Saturday when visitors Wroxham become the first Norfolk club to play Ryman League football. Like the Suffolk clubs recently promoted from the Eastern Counties League, the Yachtsmen are expected to make an immedi

Another side hotly tipped for honours are AFC Sudbury, as they were last season when, as it turned out, they fell well short of a play-off spot. They look set to do better this time and will hope to get off to a flying start against visitors Cheshunt, for whom a mid-table finish would seem to be the limit of their ambitions.

Grays Athletic have a new home (pictured) at the old Ford Sports ground in Romford. Play-off semi-finalists last season, they will enjoy the perfect playing surface and will surely be challenging again. They start with a visit to perennial strugglers Waltham Forest, once again ground-sharing at Ilford and unlikely to improve greatly.

Needham Market have reached the play-offs in both their Ryman seasons and, like Lowestoft in the Premier, will be desperate to finish on top of the pile and avoid that lottery this time around. They face tough competition but will hope to start off with three points at Ware, who received a relegation reprieve last season after finishing 21st.

Witham Town return to Ryman football after three seasons in the Essex Senior League. Teams promoted from that league usually do well and Witham should be no exceptions. They start with a home game against Thamesmead Town , whose main ambition this season will surely be to finish their much-delayed ground redevelopment.

Two sides with high hopes meet at Brentwood Town. The hosts finished 15 points away from the play-offs last season, a disappointing outcome, but some shrewd summer signings suggest better times ahead. Their visitors, Tilbury, surprised most people last season by finishing third before losing a play-off semi-final thriller to Needham, and manager Paul Vaughan will be planning to upset a few applecarts again.

Maldon & Tiptree finished last season strongly, after many changes on the playing side, and start this campaign with another completely reshaped squad after snapping up Redbridge manager Terry Spillane. He led the Motormen to sixth place and the second round of the FA Cup, and will be hunting a play-off place at least. They start with a trip to Aveley, relegated from the Premier and another side rebuilding under new management, although Justin Gardner actually took over at the Mill Field late last season, when their doom was sealed.

The two sides who finished immediately above the relegation spots meet in Cambridgeshire, where Soham Town Rangers entertain perpetual strugglers Ilford. Soham will hope to improve but Ilford may be grateful that league expansion for 2013-14 means that only one club will go down from this division.

Harlow Town will be looking to go at least two better than last season’s seventh place. They start with a trip to Heybridge Swifts, for whom 16th place was a major disappointment.

It’s ironic that, while Grays take up residence in Romford, Romford themselves are now groundsharing with Thurrock at their ground just outside Grays. Boro boss Paul Martin did well to engineer a mid-table finish on limited resources and he will be looking to start with three points at home to Redbridge, who are starting from scratch again with an inexperienced squad.

Unlucky Chatham Town host Waltham Abbey in the division’s other game. Chats once again find themselves isolated from their many local rivals in Ryman South and may be more interested in other clubs’ results than their own, hoping that promotion and relegation issues work out in such a way that they can return to their natural home. Their opponents, a Premier side in 2010-11, look likely to be mid-table finishers again.