An Annual Event- The Big Book of Football Champions, 1958 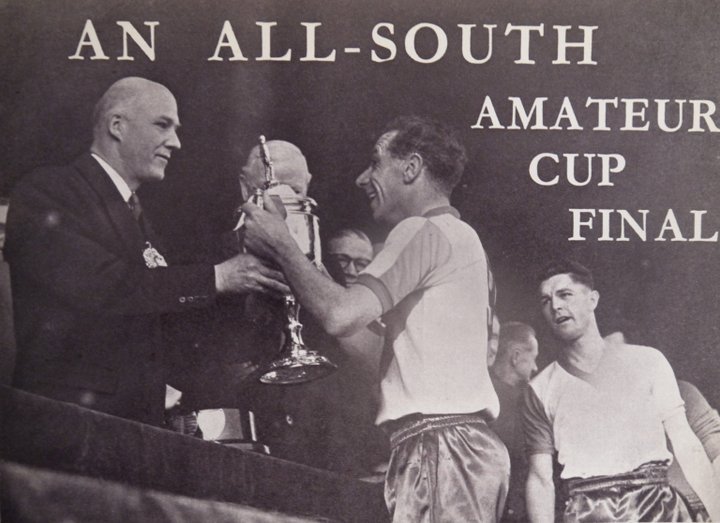 Nineteen Fifty-Eight in English football was dominated by the Munich disaster and the resurgence of Manchester United from that adversity. We also had two Isthmian sides, Woking and Ilford, in the Amateur Cup Final

If you look at a list of the events of 1958 in the UK you’ll find that many of them are memorable. The formation of the Campaign for Nuclear Disarmament and its first London march, race riots in Notting Hill, Donald Campbell setting the water speed record and Mike Hawthorn becoming the first British driver to win the Formula One World Championship are, for example, all rather notable- but one event seems to dwarf the rest in popular memory, and that is the Munich Air Disaster.

The Big Book of Football Champions may have a rather frivolous name, but it doesn’t shy away from dealing with the disaster and its aftermath, giving over six pages to black and white images- including the famous image of the shattered Elizabethan airliner sitting, broken, on the Munich tarmac, and focusing on the resurgence of the Red Devils following the disaster, as a patched up side, managed by Matt Busby’s Assistant Jimmy Murphy, went on to reach the FA Cup Final before falling to defeat against a Nat Lofthouse inspired Bolton Wanderers. United mourned Roger Byrne, Tommy Taylor, David Pegg, Bill Whelan, Eddie Colman, Geoff Bent, Mark Jones- and perhaps the greatest of them all, Duncan Edwards, but three survivors, Billy Folkes, Harry Greg and Bobby Charlton, were back in red soon enough- two of them against Sheffield Wednesday only thirteen days after the disaster.

United also had help from the Non League game, as Matt Busby called on those giants of the Non League game, Bishop Auckland, for help. Bishop were the current FA Amateur Cup holders, having defeated Isthmian League side Wycombe Wanderers in the 1957 Final, but three of their players were at Old Trafford in February 1958, captain Bobby Hardisty having been persuaded out of retirement by his relationship with Matt Busby, and brought with him Warren Bradley and Derek Lewin. Bradley went on to play sixty three times for the side and also play for England, whilst Lewin became better known for his work off the field, eventually becoming President of the Lancashire Football Association. 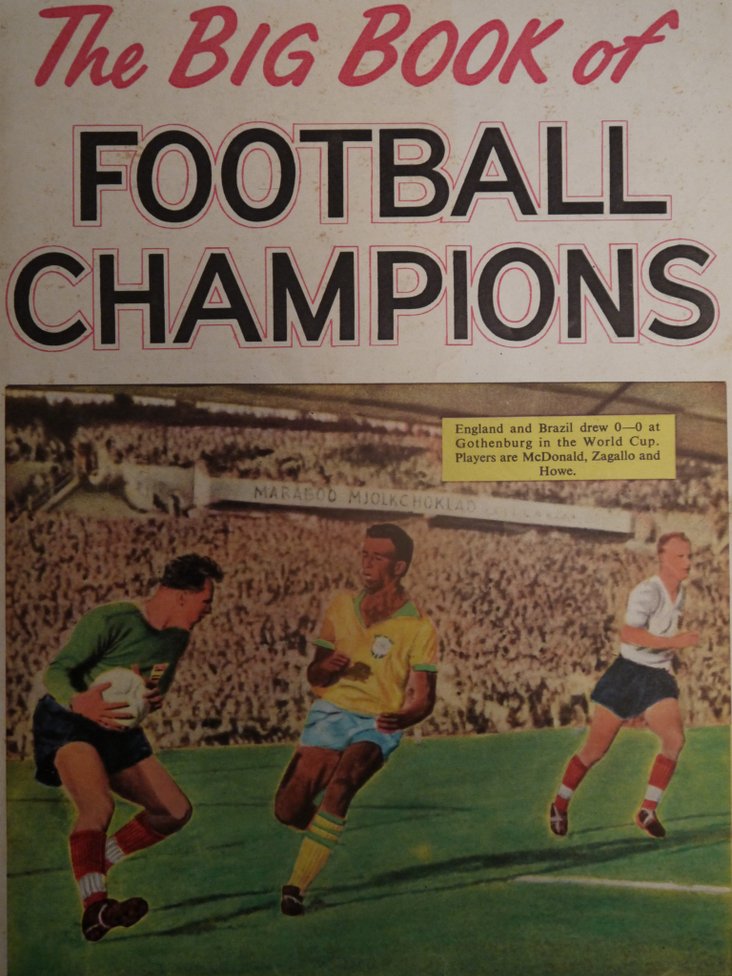 The Big Book of Football Champions, 1958

Elsewhere in the 1957-58 FA Cup, perhaps the most notable result was the defeat of First Division Chelsea by Darlington of Division Three North. The Quakers came very close to having to apply for re-election at the end of the season, but managed a three-all draw with Chelsea at Stamford Bridge before walloping them four-one at Feethams in the replay. Arsenal also lost to a Division Three side, in their case Northampton of the North Division, who defeated the Gunners three-one.

That the Amateur Cup Final was contested by Woking and Ilford came as something as a surprise. Neither had the best of Isthmian seasons, with the side from Surrey finishing in ninth place with their Essex opponents in fifteenth (the league at this point had sixteen teams). But they’d earned their places at Wembley, Woking defeating three Athenian League sides in Finchley, Hayes and Barnet, whilst Ilford , whilst Ilford defeated those northern powerhouses Crook Town in the Semi-Final, having already disposed of Isthmian rivals Wycombe Wanderers and Vauxhall Motors of the Spartan League. The book describes how “The south have at last broken the hold established by Bishop Auckland of County Durham on the FA Amateur Cup. Two Southern clubs- both in fact from the Isthmian League- Woking and Ilford made up the Final at Wembley Stadium on April 12th.”

Seventy one thousand people came to watch Woking lift the cup with a three-nil victory, with receipts (the amount of cash coming in to the Wembley coffers) of twenty five thousand, six hundred and nineteen pounds. Perhaps the most remarkable statement made in the article comes from Woking Secretary Clarence Jarman, who says:

“We haven’t a coach. We don’t believe in that prematch training stuff. We have eleven players exploiting one thing- the ball.” 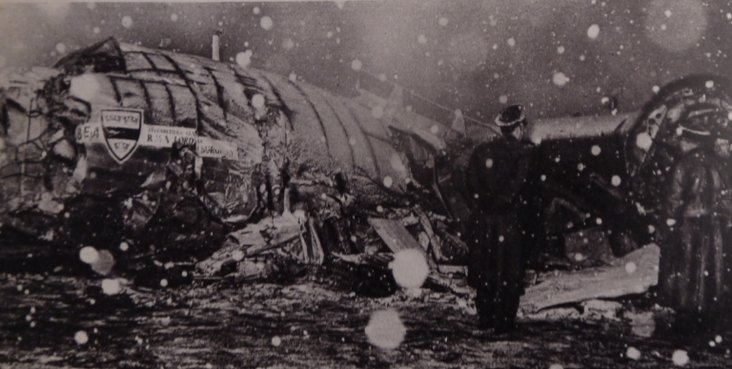 The technological aftermath of the Munich Air Disaster

It seemed to work. Our headline image is of Cards skipper Charlie Mortimore lifting the trophy.

Tooting and Mitcham United picked up the Isthmian League title, finishing four points ahead of Wycombe Wanderers, with Walthamstow Avenue a further three points back in third place.

Of course there was also a World Cup in 1958, Brazil lifting the old Jules Rimet trophy when winning in Sweden. Much of the book is given over to their triumph, with an article entitled “Brazil win the World Cup- and British teams disappoint” which could almost have been ascribed to any World Cup of the last fifty years. This article shows that the book is rather of its time, however, particularly when describing “the volatile, unstable, highly emotional Latin temperament” which needed to be controlled if Brazil were to triumph, followed by a couple of other references to race which we’re not even going to repeat. This was a tournament that saw the emergence of a forward you may have heard of, a chap named Pele, who scored the winner in the Quarter Finals against Wales, three more as they walloped France five-two in the Semi-Finals, and another two in the five-two Final win over the hosts. England were in the same group as Brazil, finished joint second after drawing all three matches, and were then knocked out in a group play-off with Russia, whilst Scotland finished bottom of their group. Wales were the best of the home nations, until Pele scored the only goal of their encounter with Brazil on June 19th.

Back in the domestic game, Wolves took the League title, five points head of Preston North End with Tottenham Hotspur another eight points further back in third place. West Ham United earned promotion by being Second Division Champions, whilst Brighton and Scunthorpe triumphed in Third Division South and North. 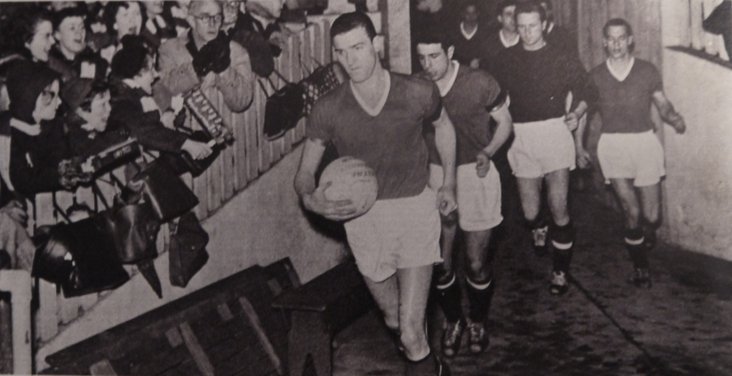 Billy Foulkes leads out United thirteen days after the disaster 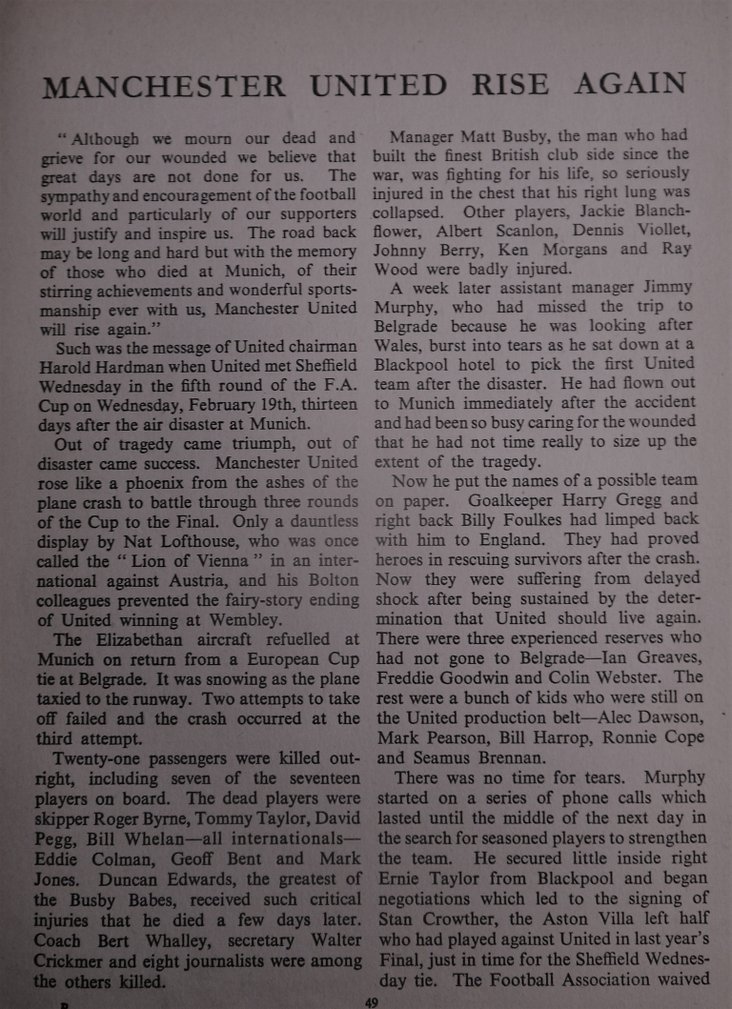 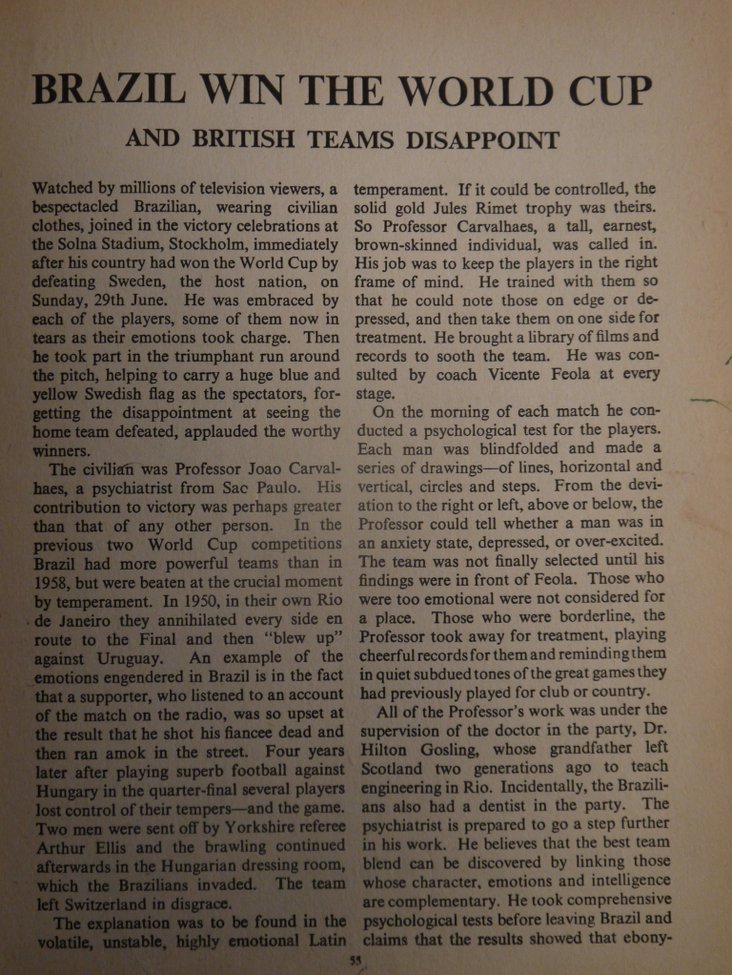 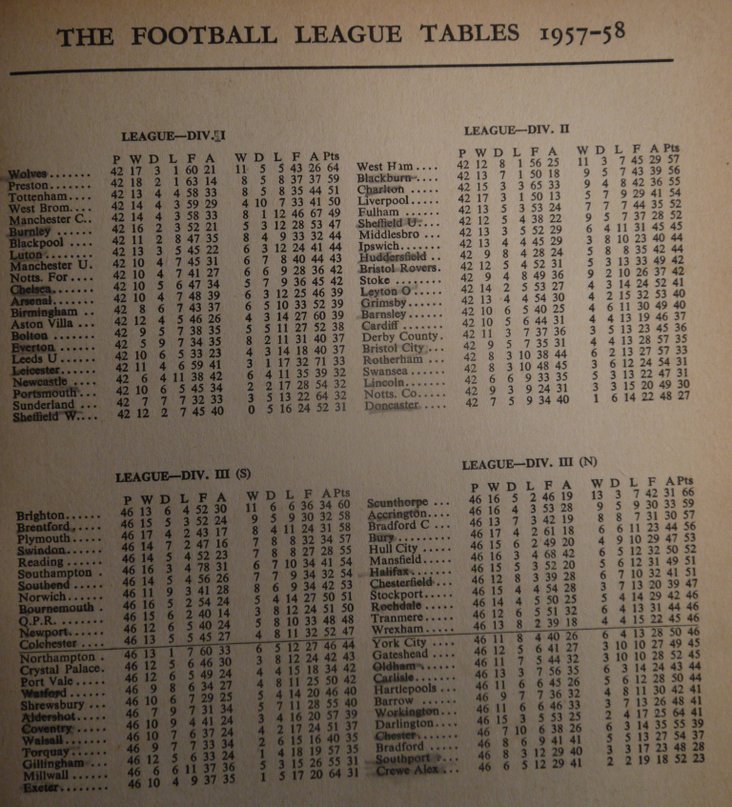 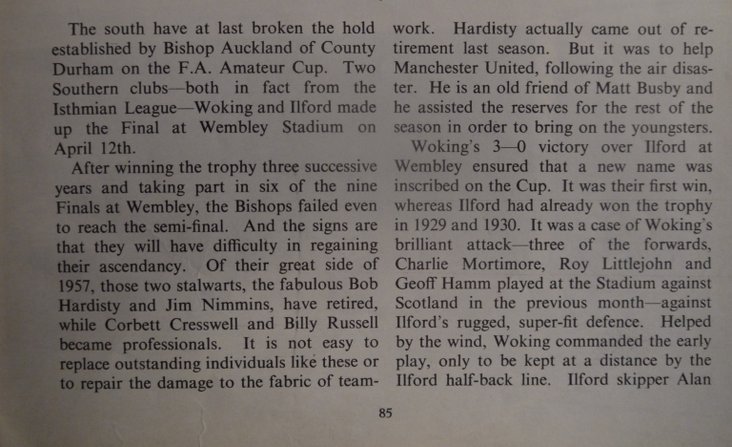 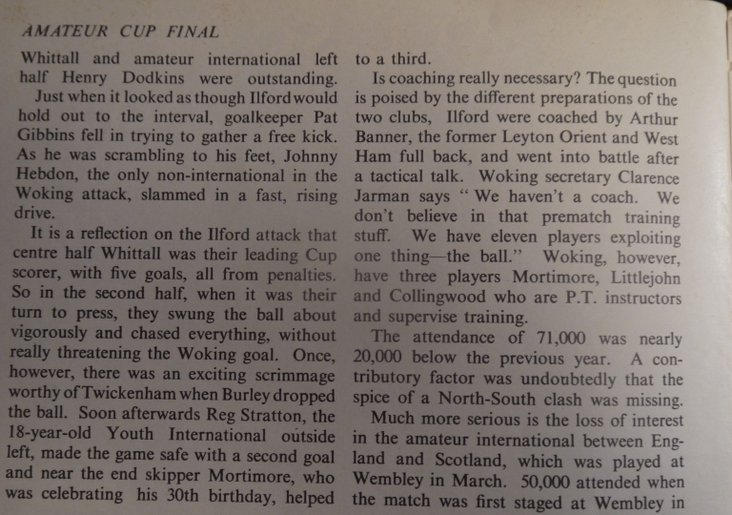 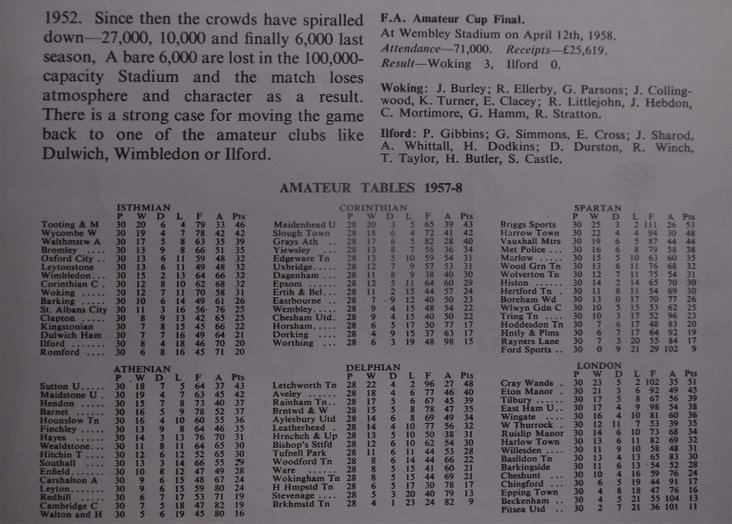 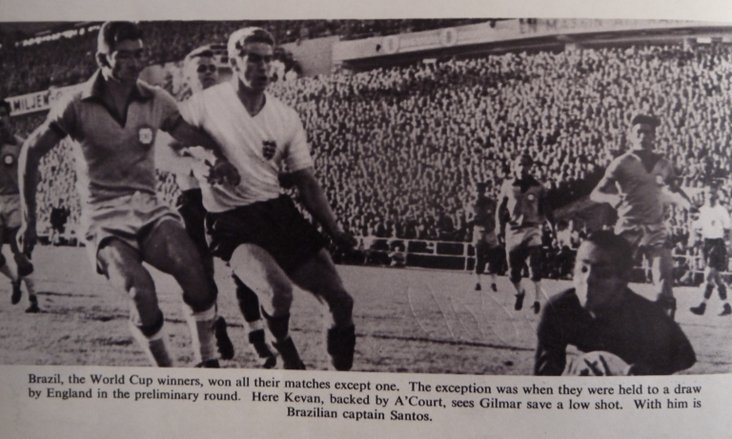 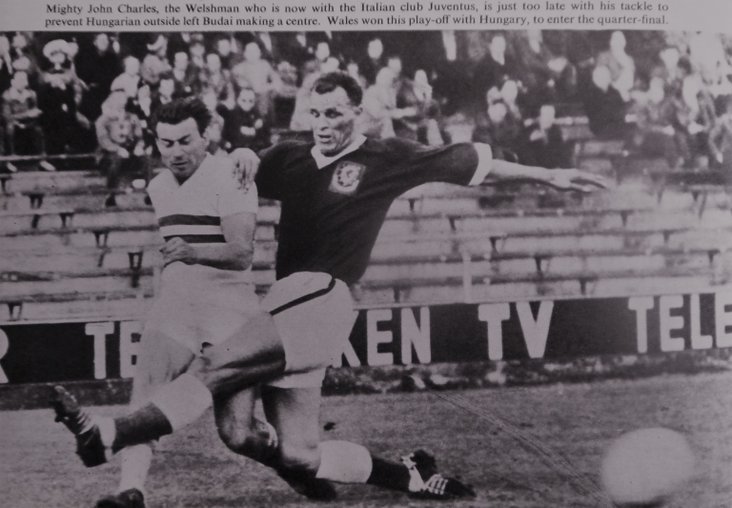 John Charles of Wales (and Juventus) 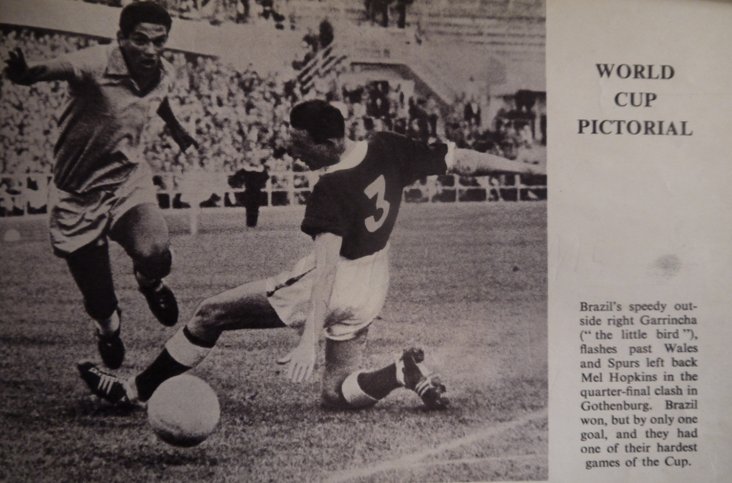 Garrincha for Brazil, Mel Hopkins of Wales (and Spurs) 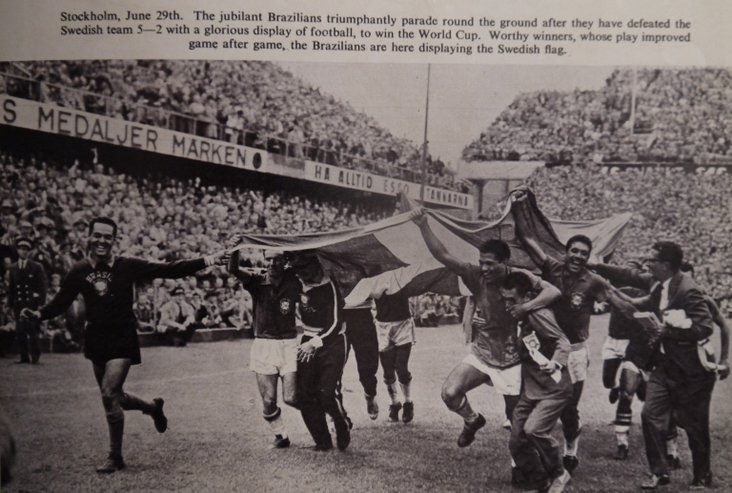 The best of 2020- your highlights  We've already brought you highlights from fans of Canvey Island and Cheshunt, but here are a few more from fans across the Pitching In Isthmian League