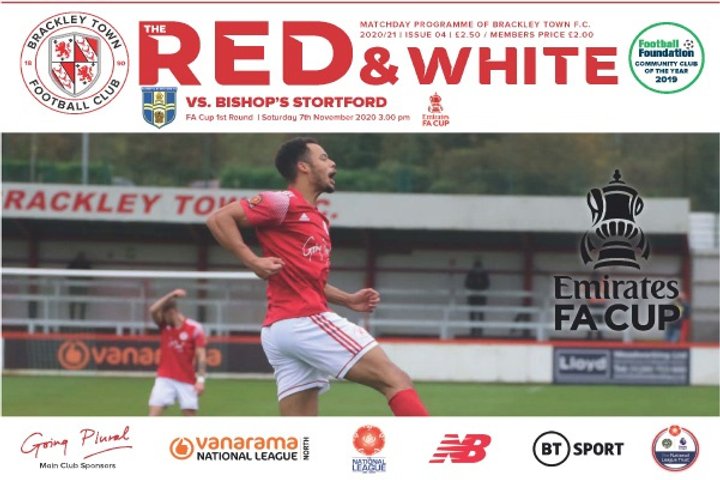 Can the Blues break their First Round hoodoo for the first time since 1982?

Bishop's Stortford have had a magnificent start to the season. Unbeaten in six league games, four cup games and one trophy match, the Blues have won nine of their eleven matches so far, slayed a giant in the last round, and in midweek showed their resilience by coming back from two goals down to defeat Brentwood Town in the FA Trophy. They travel to face Brackley Town today high on confidence, and although the match isn't allowed to have spectators, fans can stream it live for the princely sum of two pounds by heading here. The match kicks off at 3PM today, and coverage will begin five minutes earlier. BBC Radio Northampton apparently have live radio commentary for those of you with a good imagination!

The programme is available for download, also for two pounds, and you can find that here.

Their hosts are- like St Albans City in the last round- in Step Two, in this case National League North. They sit in eighteenth place at present, without a win in their three matches- but they've only lost one of those. They've played only one match to get to this stage, defeating Billericay Town on penalties after a two-all draw.

The sides have only met twice before, in 2012-13, when our Blues were rather inexplicably in Conference North despite being based a few miles from an airport that calls itself London Stansted. Stortford lost both of their encounters that season, one-nil away and three-one at home, so this one needs to be third time lucky.

The Blues road to Round One:

 Gulls make the Second Round- whilst Stortford come so close, but lose at the last Canvey Island and Bishop’s Stortford appeared in fan-free FA Cup First Round ties this afternoon, both against higher ranked sides- and both delivered magnificent performances. A round up of a pulsating afternoon of cup football.

FA Cup Preview: Banbury United v Canvey Island  Can the Gulls get to Round Two for the first time in almost two decades?