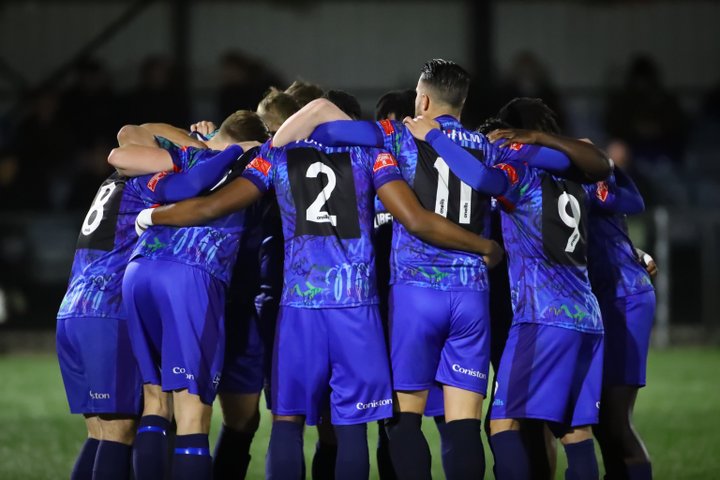 Worthing would have gone ten points clear at the top of the Pitching In Isthmian Premier Division with victory at Margate last night, so the Blues did the rest of the promotion contenders an enormous favour, scoring four goals- the second time that Worthing have conceded four this season, but they scored five the last time it happened!

Margate took an early lead- the fourth minute, in fact- and Vance Bola did the damage. It was two on twenty two minutes, Montel Agyemang doubling the advantage, and three-nil nine minutes after the break, Bola grabbing his second. The visitors then hit back, Ollie Pearce getting his nineteenth of an impressive campaign- and he got his twentieth in the very last minute, but before then Ben Greenhalgh had put the Blues out of sight- the eleventh of the season for Margate's number eleven. That result sends Margate up to tenth, but it also means that second place Folkestone Invicta would close the gap on Worthing to four points if they were to win their game in hand, and that third place Enfield Town would close it to two points if they won their two games in hand.

Into the Pitching In Isthmian North Division, and we have new leaders, Stowmarket Town walloping fellow promotion contenders AFC Sudbury three-nil to go three points clear. Luke Brown got all three goals, two before the break and one shortly after it- that's seven in eight matches for him. Canvey Island are three points behind with two games in hand, Dereham Town in third, three points behind having played the same number of matches.

Witham Town struck first in their match at Felixstowe and Walton United, Adam Vyse, with the goal on thirty one minutes- but twenty minutes later the Seasiders equalised courtesy of Sam Nunn. Witham remain eighteenth, Felixstowe are up to fifteenth.

The Pitching In Isthmian South Central had but one match and one goal, and it went to Binfield, specifically to Ollie Harris in just the fifth minute. Tooting & Mitcham United couldn't find a way back, and the Moles remain in eighth, now three points off the top five. The Terrors are eleventh, a full fourteen points away from the places which will provide our end of season lottery.

In the Pitching In South East Division Burgess Hill Town won their first Tuesday night away match for around four years, and they did it in style, crushing Hythe Town by five goals to one. Hill's progression up the table has been rather relentless in recent weeks, and they've lost only one league match in three months. Last night they scored all six goals just to be charitable, Michael Uwezu and Tom Chalaye getting two each in the right net, Hayden Skerry the other, after an own goal had actually given the Cannons a twentieth minute lead. That was the only moment of joy the home fans had all night. The Hillians are in ninth, eight points off the top five and surely able to focus all their attentions towards the top end of the table for the rest of the campaign.

In the Velocity Trophy, Chertsey Town travelled to Marlow and progressed to the Third Round in this South Central cup battle. Sam Murphy gave the Curfews an early lead, Devontae Romeo equalised on twenty minutes, and six minutes later Tony Halsey got what was to prove the winner for Town.

Pitching In Isthmian internal moves- w/e 11 December 2021  Last week's internal deals, as you might have missed a few!