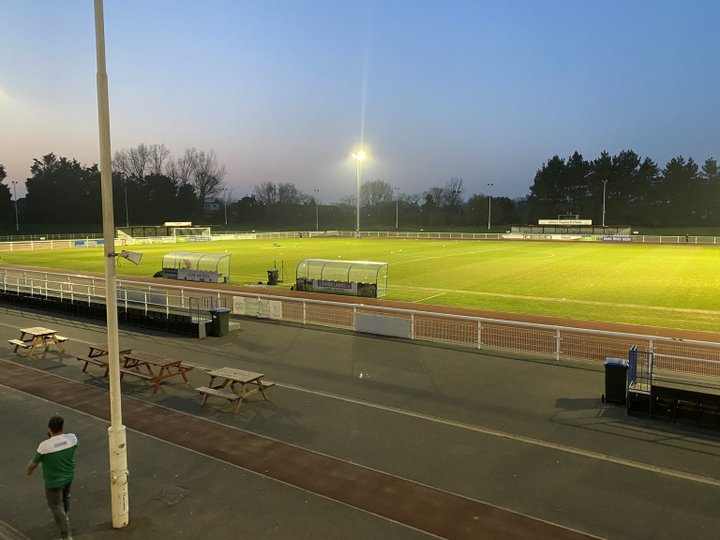 Cheshunt are gaining momentum, but it was a bad Pitching In Isthmian Premier night for strugglers East Thurrock, Leatherhead and Merstham. It's our round up.

Enfield Town went ten points clear of sixth place Lewes in the race for the Pitching In Isthmian Premier Play Offs by defeating Leatherhead by the only goal of the game last night. It came after just seven minutes, Sam Youngs finding the back of the Tanners net- and that was that, a result which sees the Towners end the day in third whilst the Tanners are still second bottom, seven points behind Cray Wanderers in the quest to escape automatic relegation and now having played their game in hand.
The last time the two met, on October 9th, goals from Mo Faal, Percy Kiangebeni and Adam Cunnington gave the Towners a three-nil win.

Image from the Tanners- the calm before the storm.

Hornchurch are up to fourth, following a slightly more comfortable- on paper, anyway- win over Corinthian-Casuals. Tom Wraight's eleventh goal in eighteen matches put them ahead after only two minutes, but they played most of the match with only ten men after keeper Joe Wright was dismissed nineteen minutes later. Number eleven Joe Christou was forced to take over in goal, and Casuals must have rubbed their hands together in glee, but try as they might they couldn't get past the makeshift stopper and indeed themselves went down to ten soon after the break, Kieron Cadogen seeing red.

The Hornets made sure of the points twelve minutes from time, Liam Nash with his usual crucial intervention- but the plaudits go to Christou, for keeping a clean sheet.

Cheshunt are eight points behind Folkestone Invicta in the chase for that last Play Off place, but are in fine form and haven’t given up yet- particularly as they have two games in hand over the our friends from the Kentish seaside. The Ambers hammered another nail into East Thurrock United's coffin last night, winning two-nil. Jo Re opened the scoring on twenty two minutes, Amadou Kassarate ending the chance of a Rocks comeback with the second just before the hour. The Ambers are seventh, whilst the Rocks remain rock bottom.

Another relegation-threatened side, Merstham, were on the road to Bognor Regis Town. The Moatsiders are only a point above the bottom three, and now with eight defeats from their last nine matches after the Sussex Rocks emerged triumphant. It could have been so different when Serge Makofo gave the Moatsiders the lead ten minutes before the break, but just before half time Dan Gifford equalised from the spot, before getting what proved to be the winner, also from the spot, ten minutes later. Bognor remain eleventh.

 Advantage Stowmarket? After Canvey and Aveley fail to win, Town are three points off the top with two games in hand. We also have important wins for Brentwood and Dereham. It's our Pitching In isthmian North round up.